Sleeping With The Enemy: The Mountaineers of Appalachian State

Share All sharing options for: Sleeping With The Enemy: The Mountaineers of Appalachian State

Georgetown was bruised and battered against Temple on the streets of Philadelphia, but it's time to move on and regroup for Appalachian State.  As usual we here at THE GLOBAL PHENOMENON are bringing you everything you need to know about Georgetown's next opponent.  Special thanks to Steve Behr, the Sports Editor at the Watauga Democrat, for providing answers to our always intriguing questions. Mr. Behr, these steins of beer are for you. 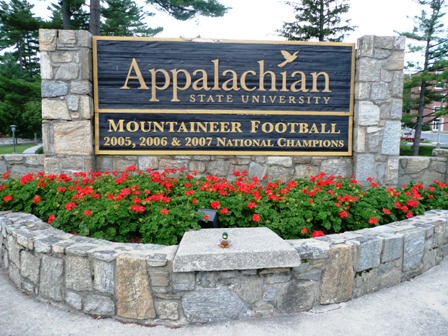 We are a sucker for a good David v. Goliath story (unless you mentioned the Ohio Bobcats). Take us back to Appalachian State's incredible victory at the Big House against Michigan. Where were you? What were you doing? What did you eat that day?

So many questions. For starters I covered the game. I believe I was around the 40-yard line in their old press box, which has been renovated since. We were taken to the field with eight minutes left in the game so that we didn't have to walk through 109,000 people in that big bowl.

Just before Corey Lynch blocked Jason Gingell's final FG attempt, another ASU writer said we had not heard from No. 47 (Lynch's jersey number) just yet. The next play not only does Lynch block the FG, he scoops it up and runs it to the 5-yard line where the kicker (and did it have to be the kicker?) tackled him.  I also remember the staff at the hotel wishing us a good game thinking Michigan would win something like 65-7. When we got back, they kind of looked at us like "You (blanks!) What did you do to our team?" I'm just glad they didn't kick us out.  It was truly a moment I'll never forget.

As for what did I eat? Hotdogs, popcorn and soda before the game at the stadium. Not exactly Top Chef stuff , but the press will eat glue on cardboard as long as it's free. I also had some type of burger at the hotel afterward and some soup at the Bob's Big Boy near the hotel when another ASU writer got hungry.

First of all, thanks for saying App State and not Appy. We in Boone are never happy with Appy. Western Illinois' football coach used the term Appy in pregame interviews and the Mountaineers beat them 42-14 in their playoff game last week. Then again, had he used the term "The Great and Powerful App", ASU would have won 42-14. But still....

Anyway, Senior guard Donald Sims leads ASU in scoring with 27.0 points per game. He's made 23-of-60 from 3-point range and is shooting 91.8 percent from the foul line. Last year, Sims made 95.1 percent of his foul shots. Shooting guard Omar Carter (6-foot-5), a transfer from Charleston Southern, averages 15.7 point per game and pulls down 6.3 boards.

Which was more meaningful for App State's athletics: Winning FBS National Championship or beating Michigan to open the season?

That's like asking to choose either Ginger or Mary Ann. Steak or lobster, or your favorite M&M. Both meant a whole lot to a football program that never got past the semifinals until 2005 when they won their first national title. The players insist that the FCS (Football Championship Subdivision) national championship (the FBS or Football Bowl Subdivision, include the power conferences Big East, ACC, Big 12 etc.) meant more. They won three straight and to quote quarterback Armanti Edwards "Beating Michigan didn't put a ring on my finger."
It's all about the ring at ASU. They're favored to win another one this year if they can get past Villanova today.

However, no PR firm in the world could match the publicity of the Mountaineers' win over Michigan. For their next game, a home game against Division II Lenoir-Rhyne, USA Today, the New York Times both sent reporters. Even Miss Teen South Carolina that goofed up her question about geography (remember the Iraq and the whereas and kids not having maps?), who had enrolled at ASU (she's not there anymore) got into the act by pointing out Boone on a map. (Casual note: Whoa!)

It was simply the biggest upset in college football history mostly because not only of the obvious circumstances such as Michigan's tradition, depth, size and 109,000 of their closest friends cheering them on, but because Michigan recruits 85 Big 10 scholarships, while ASU recruits 63 SoCon scholarships. That's where ASU's win trumps Stanford's upset of USC the following week. Both of those teams recruit Pac 10 players and Stanford proved this year that tough admission standards isn't an excuse to have a bad football team.  Personally, it was a career highlight that I'll never forget. Covering an event like that is, at least for my career, likely a once in a lifetime deal. A long-winded answer I know, but a quick answer to any Michigan-ASU question is like asking the Man vs. Food guy to settle for just one taco.

The Big East recently invited Villanova to join its D1 football conference. Would App St., a storied program with much success on the FBS, level ever think about moving up?

They are actually conducting a study to see if a move would be the right thing to do. Things in favor include a good base crowd (avg around 29,000 per game), great facility that can be expanded (the locker room is as nice as any NFL room I've seen) and good talent to start, but it would have to be upgraded to compete on that level.
Strikes against is location. Boone is at least 2 hours from Charlotte, 2 hours from Greensboro and 1 1/2 hours from Tri-Cities airport. Boone, at 13,000 year-round residents, isn't exactly a major market.

Not a lot of teams like to fly and then drive that long for basketball games or football games either. Scheduling quality, interesting non-conference home games is always a nightmare, especially for basketball. Also if they get into existing conference, lots of the budget gets eaten by travel. Plus head coach Jerry Moore isn't likely to stick around for a move to FBS. He's been there, done that and likes ASU where it is.

Interestingly, App State has been an incubator for some solid coaches, including Bobby Cremins and Buzz Peterson. The athletic department took a lot of heat for turning the keys to the program over to the untested Jason Capel but looking back, does that seem like the right move?

Which Peterson reign do you mean? The first when he stayed a while, or last year when he bolted to UNC Wilmington after turning down Marshall after one season?

But seriously folks, Capel's first game was an 89-86 win over Tulsa and they nearly beat Mississippi State before losing 76-74 where they blew a late nine-point lead. I'm one who actually likes to see the results of a move like that before predicting them, because if you're wrong, you look rather foolish. So far, so good though. The big question is how long will he last? If he reaches the NCAAs within the next two years, will a big school with a big contract lure him away?

The SoCon looks like it usually does. In the South, College of Charleston has played well by pushing North Carolina until the final few minutes. We'll see if they disappoint again like they've done in the recent past. Davidson's never an easy out, but lost a lot when Stephen Curry (Casual note: He Who Shall Not Be Named) went to the NBA. Wofford is the defending SoCon champ, but it's too early to tell to know for sure if they'll be a factor in February.

In the North, App State is the favorite to win the division. If there is a year for the Mountaineers to return to the Big Dance, — they haven't been since 2000 — this would be it. Sims is a four-year starter and Carter was the best player on the roster last year not named Sims, but he had to sit out because of transfer rules. Another transfer, forward Anthony Breeze, was the other top player not named Sims, but he had to sit out last year for same reason. He's very athletic, but has a bum calf muscle. Chattanooga is usually tough and already beat Appalachian State 81-69 in Chattanooga.

Boone sits pretty far to the West in North Carolina and we love us some barbecue. What's the best barbecue spot out there?

Of all the good places in this state to get barbecue, folks are kind of limited in Boone. Bandanas is generally the place of choice for barbecue in Boone. Woodlands in Blowing Rock, a wealthy summer-home town just south of Boone, is better. Both places are Western barbecue.

That's really about it. The signature restaurant in Boone is the Dan'l Boone Inn, which serves family style chicken, spuds, green beans and sweet tea. I believe they also have a breakfast. The line coming out of that place is usually longer than Patrick Ewing's and Alonzo Mourning's arms combined. The best steak is a small but nice restaurant called The Pedler, if your on an expense account. The best pizza, for me it's by far, is Capone's.

It's a Friday night in Boone - what are the kids doing for fun?

Driving to Charlotte to do their laundry at their parent's houses. Actually, I'm a 47-year old square, but I asked some of the younger folks in the newsroom about this. A place across the street from campus and the Holmes Center (ASU's hoops arena) is Klondike's. It always looks packed whenever I drive by. Downtown - all four blocks of it - has places like Boone Saloon, Cafe Portifino, Murphy's and Macado's. All serve enough spirits to keep up with the holiday spirit.

ASU usually hangs tough with the power conference teams in the first half, and then fades in the final few minutes. I'll take Georgetown by 8-12, but don't tell them because if ASU wins, those hot dogs I had in Ann Arbor will taste like crow.