Share All sharing options for: The Casual Awards: Version Epic

Now that was some shiznit last night, wasn't it?  Hot damn!  There is nothing quite like grabbing victory from the jaws of defeat, and after that riveting pulse pounding WIN by your Georgetown Hoyas over the Missouri Tigers, we here at THE GLOBAL PHENOMENON are handing out casual hardware to those most deserving.  So let's get down to business.  Away we go...

The Chris Wright Heart of a Champion Award:
It would be easy to give this award to Wright for his clutch three, Freeman for his consistency throughout, or Jason Clark for his overtime heroics, but it just wouldn't be fair, so for the first time (and probably not the last) this award will be shared by all three. The "trio that has yet to be given a casual nickname" was simply tremendous: 21 points and 10 assists for Wright, 31 points for Freeman, and 26 for Clark. 78 combined points, 14 of 14 from the line. Jesus is lord.

The Dick Vitale Award:
Doug Gottlieb - not since Dickie V has a TV guy created so much vitriol and divided a nation.

Casualhoya and JGD shared this reaction:
I really want to hate this guy but lately I have found myself agreeing with most of what he has to say. His commentary on the game of basketball itself is often insightful, and while he still maintains a cheesy edge "Austin Freeman, Man of Mystery", I blame that on the steroids he's likely taking to supplement his P90X workouts.

Hire Esherick, lordnick, and apparently everyone in DC had this one:
Dan Marino Doug Gottlieb should die of gonorrhea and rot in hell. What idiot commentator picks a winner in a game he is commentating on and subsequently acts like the biggest homer while calling it. So many things can be said about why you suck Doug, but I have come to realize your suckiness is the reason you still have a job. Kudos to you for being an assclown.

The Kevin Arnold Award:
Dedicated to the protagonist of The Wonder Years, my favorite show growing up, this one goes to Nate Lubick, who in his 20 minutes of action demonstrated that he will be an extremely valuable asset for Georgetown this season even as a freshman. The box score only shows 2 points and 4 boards for his effort, but he was a rock out there, diving for loose balls and banging down low. I like this guy like the way Kevin liked Winnie except if I were Kevin I definitely would have hooked up with that fox Madeleine.

The ESPNU Award for Georgetown dominance:
ESPNU. The Hoyas improved to 2-0 on the season when playing on ESPNU. The game against Utah State on Saturday is on ESPNU as well, so I'm looking forward to being hypnotized by this bizarre Georgetown bulldog thing they use when going to commercial. 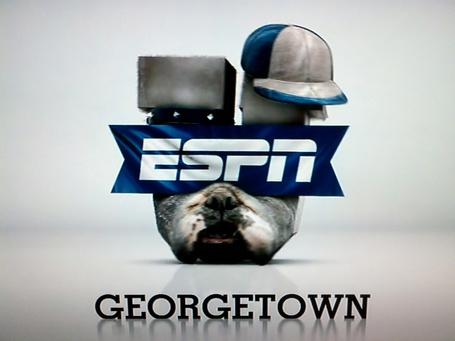 The Stephen Curry Memorial Award:
Marcus Denmon.  27 points on 10 of 12 shooting from the field and 5 for 7 from three.  A rifleman in the mold of the dreaded Stephen Curry and Armon Bassett. I want no part of this guy come March.  I also have no idea why he didn't touch the ball in overtime, but that's not my problem.

Mikhail Baryshnikov Award for Being a Male Ballerina, or Ballerinbro:
Henry Sims.  What was that, a side leap?  Reminded me of that time my high school girlfriend made me watch Save the Last Dance and subsequently introduced me to the evil that are "chick flicks". Whatever you did on that last play in regulation, thank you.

Jeff Green's Dad Award for Drunkenness:
Hoyajoker and Iheartgregmonroe.  No, you did not get kicked out of the Irish Channel, yet, but you did manage to show up to a 9pm game watch at 630pm!?!?!  You're the bestest.

The Ketel One Oranje Dos Equis Award:
Ketel One Oranje. I don't always drink vodka. And I don't ever drink flavored vodka. But when I do, I prefer Ketel One Oranje with a splash of soda and a lime provided for free by a Diageo salesgal at the GLOBAL PHENOMENON's gamewatch. 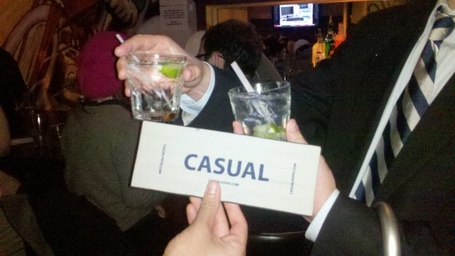 hoyasincebirth Award for Optimism:
Our bigs got in foul trouble and the team won the game.

lordnick Award for Cynicism:
Jerrelle Benimon?!?  We had a better chance winning in regulation playing 4 v 5.

The Brandon Bowman Award:
Dedicated to the individual with questionable play down the stretch with the point spread hanging in the balance, WHAT THE HELL WAS JASON CLARK DOING TRYING TO FOUL THAT GUY AFTER THE WRIGHT THREE?  This morning could very easily have been one of the toughest to wake up for had that ref decided not to swallow his whistle on that one.  Phew.

The Patrick Ewing, Jr. Memorial Award:
Dedicated to the individual who was productive off the bench and showed spunk while on it, let's give it up for Vee Sanford!  Vee was great in his 8 minutes of action, hitting a three and playing good defense.  But it was his reaction while on the bench that struck me last night.  Vee has taken a decent amount of heat for demonstrating poor body language and a seemingly distant demeanor during games, but check him out at the top of the screen after one of Clark's OT daggers below: 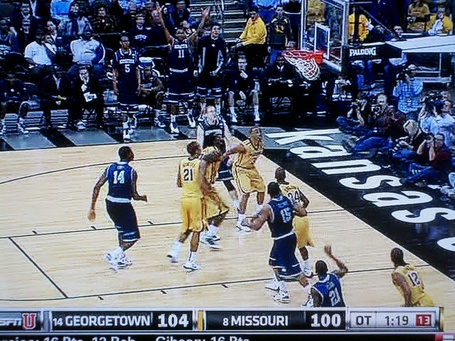 Jimmy V Award for Never Giving Up:
Your Georgetown Hoyas. Down four with twenty seconds left and the other team has possession? FOUL. I always hated when I thought teams were extending the inevitable but nothing is out of the realm of possibilities with these heart attack Hoyas. Well done JT3.

The George Foreman Grill Award:
Missouri. You couldn't cook a cheese sandwich in that defense. The Tigers brought it out strong in the first half and The Hoyas proceeded to pound them into dust in a very Casual first half. Broken presses for easy dunks, half-court passes that led to crushing threes, it made no difference. Whomever hyped the Missouri press (this blog?) was full of it. The Hoyas took it apart.

The Jim Nantz Commenter of the Game Award:
brandonbowmansfootistoobig is this game's winner for providing casual commentary in the absurdly entertaining gamethread while listening to the game in his mother's basement.  Yesterday we learned that his current girlfriend is a Syracuse fan and his ex girlfriend is a Missiouri fan who was at the game and tortured him with texts prior to tipoff.  Good thing you weren't the current buffoon who had to console her tears of self-hate after Georgetown crushed her soul.

The Frank Drebin Memorial Award:
Dedicated in the memory of the late great Leslie Neilsen, for all Missouri fans out there here's a casual 8 minute clip of Airplane! and The Naked Gun highlights to help erase the taste of bitter defeat at the hands of the Hoyas.

The Lord Voldemort Award:
Julian Vaughn. I hate to be the dark cloud over an otherwise glorious win, but Vaughn was horrendous last night. Invisible on offense, a human foul machine on defense due to constant late switches or leaving guys open on double teams, Vaughn rode the pine for the majority of the 2nd half and overtime. Georgetown will be nearly unstoppable in games where Vaughn maintains a presence down low, so the fact that the Hoyas can beat a team like Missouri with Sims playing the majority of minutes is an excellent sign.

The Double Stuf Oreo Award:
You.  Nearly 850 comments in the gamethread.  Well done.

The Glory of Mute Award:
Anyone with a television remote. Alas, the GLOBAL PHENOMENON'S biggest and most successful game-watch ever was, sadly, burdened by giant-screen televisions AND cranked-up volume. We'd rather listen to Doris Burke run a phone-sex line.

The 'Sweet Lord Baby Jesus How Do They Shoot Like This' Award:
Hollis Thompson. I think I literally exclaimed the above on one of Thompson's first half threes. But he accepts it on behalf of everyone else. FORTY-SEVEN PERCENT THREE-POINT SHOOTING LAST NIGHT. Is this insane? Are we in outer space? Is it Thunderdome? Yes! (Thompson, by the way, shot 50 pct; 1-2, but still. Freeman was 6-11. That's a lot of shots young man. BUT MORE THAN HALF OF THEM WENT IN!!!!)

The Document Your Lunch Award:
Tuesday night was Taco night! 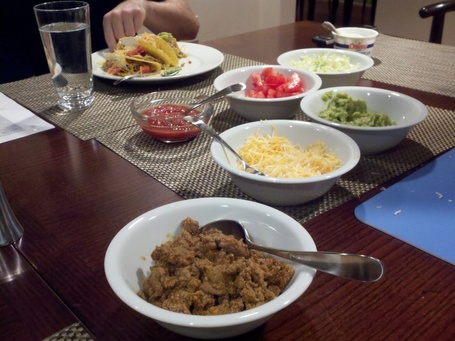 The Wendy's Award:
Where's the beef defense?  Yes, Georgetown won the game but the Hoyas got sucked into Mizzou's tempo and rarely stopped the Tigers on possessions in the second half.

The Nikita Meshriakov Award For Tremendous Backboard Shooting.
Missouri's #3. No, I am not going to look up his name. But you remember. First half. Not the side of the backboard. THE TOP!! Well done, young man.

The John Cahill Memorial Award For Actually Not Getting Screwed by The Refs:
Austin Freeman. The shot at the end of the first half? Yeah, not even close. But hey, what are you going to do? It's not like the game was decided by three points. Well, not in overtime. WHEN WE CRUSHED YOUR SORRY MISSOURI ASSES. Whatever. Win some, lose some. The refs were a little whistle-happy and it all worked out in the end.

Old Balls Award (Named in Honor of the Winner of (2010 Casual Bracket Contest):
Derek Anderson.  Real casual press conference explosion after that baffling embarrassing performance on Monday Night Football.  Not sure what was worse - his reaction after being called out for laughing on sideline or that damn beard.

The I am Sorry Ma'am, Can I Help You Award?
The INEXPLICABLE number of chicks at THE GLOBAL PHENOMENON'S game-watch last night. It has been established in the comments that at least three women, or grown men impersonating women, read this blog. We can attest now after last night's triumph that there may be as many as TWICE THAT. Clearly we are about to start a dating blog.

Neutral Court Award.
Sprint Center, Kansas City. Let's explain this award in metaphor: imagine Sweet Baby Jesus was a basketball player and (obviously) he played for the US national team. Now, clearly, Sweet Baby Jesus and his team of American Heroes would probably, at one point, play an out-of-conference game against The Devil Himself and a team of Communists. By the logic of last night, that neutral-site game would occur at the Kremlin. IN HELL. Give me a break. NICE AWAY-GAME WIN HOYAS!

The CAN Stop Believing Award:
JahidiLikesPie. Who left the bar when the Hoyas were trailing by four late in the second half? I hope your MetroNorth train got ESPNU, sucker!  See you at Utah State.

The True Fan Award:
Everyone at the Iron Horse. Never have so many mother's basements been emptied by so many sad Internet users to drink so many $3 Miller Lites

The Let's Not Get Carried Away Award:
YOU. Easy there pal. Let's not all go sneaking into the unisex bathroom at the Iron Horse just yet to give each other handjobs just yet. Good win, fine. But we knew Missouri wasn't up to it, for christ sake their blog told us so. And we were one Henry Sims jumping jack away from losing that game in horrible fashion after being up double-digits in the first half. Still lots of turnovers and last night was a win not on our terms--a tempo that will have the Kenpom nerds rebooting their calculators. We here at THE GLOBAL PHENOMENON are not prepared to relax after this. There is much more to do. See you on the Acela Club balcony on Saturday. 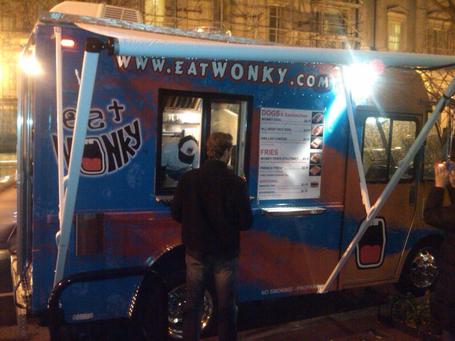 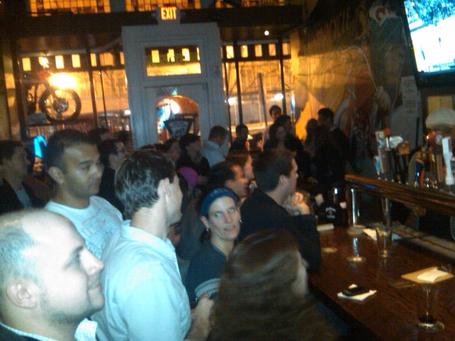 The Georgetown Hoyas are an undefeated national powerhouse.

Utah State is NeXt.