Sleeping With The Enemy: The Bulldogs Of UNC-Asheville

Share All sharing options for: Sleeping With The Enemy: The Bulldogs Of UNC-Asheville

I must admit I have a pretty substantial Thanksgiving food coma/hangover right now.  At my Thanksgiving dinner I ate a decent amount of Austin Freeman, a substantial amount of Jason Clark, and avoided the Hollis Thompson as it looked a bit tart.  And while I am still trying to come to terms with Georgetown's #5 Power Ranking, as usual we here at THE GLOBAL PHENOMENON are bringing you everything you need to know about Georgetown's next opponent, the Bulldogs of UNC-Asheville.  Special thanks to Marty Nicholson of SportsView, the single greatest source for all things UNC-Asheville on the internet for providing the answers to our intriguing and enlightening questions.  Mr. Nicholson, this glass of pinot noir is for you. 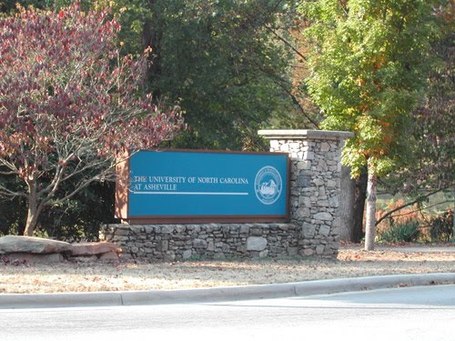 What can Georgetown expect from this year's UNC Asheville squad? What kind of style does the team play? Who are the leading scorers and rebounders?

You can expect a fairly experienced mid-major squad from Asheville when the Bulldogs visit the Verizon Center. We return four starters including junior guards Matt Dickey and J.P. Primm. They have been starters since their freshman year and really play off each other nicely. Other starters are senior forward John Williams (you may have seen his Midnight Madness dunk on PTI and SportsNation...or check YouTube), junior forward Chris Stephenson and sophomore center D.J Cunningham. The team plays a little more slowly than most people like...they are a half-court team, but have tremendous speed in Dickey and Primm, so watch for quick outlet passes off defensive rebounds. We play VMI twice a year in the Big South Conference and they are a run-and-gun team. For the past two seasons, Asheville has taken it to them in this style and many of us wish coach Eddie Biedenbach would change his thoughts about doing this full-time...but, after a career in coaching, he is not going to do that, so the speed and style is slowed down.

Matt Dickey has been the leading scorer through the first couple of games of the season (he tied his career high of 26 last night against Furman University in a 69-67 loss), and J.P Primm has led the rebounders. John Williams has not gotten into the groove yet, but he is an outstanding shot blocker and rebounder as well.

You all made national headlines with 7'7 Kenny George a few years back. Sadly, his career came to an abrupt end with his right foot being amputated. Did he finish his degree at UNCA? Any clue what he's up to now? 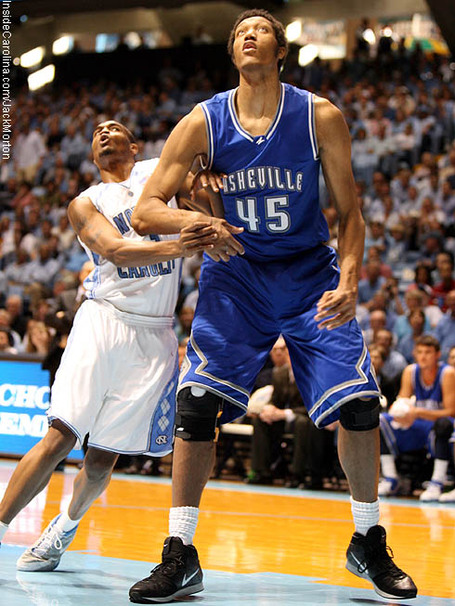 Kenny, unfortunately, has not returned to UNC Asheville (please, not UNCA...), but he was working on a mass communications degree. Last I heard, he was still back in his hometown of Chicago, but I don't know what he is doing.

Under Gregg Marshall, Winthrop made a simply miraculous turn from being a traditional win for most teams to dominating the Big South for years. Everyone says Asheville is a great city (and must be better than Rock Hill, SC) so what's the best that the program can hope for on a consistent basis?

Asheville is a great city (we moved here from the DC area and love it...and yes, better than Rock Hill, which actually is a bedroom community of Charlotte) and the university is really good. UNC Asheville is the liberal arts branch of the UNC system and has a very well-known atmospheric sciences (meteorology) department. The school attracts a wide variety of people and the kids on campus seem to be really terrific.

On a consistent basis, UNC Asheville can compete in the Big South. Two consecutive 15-16 seasons were both due to getting off to terrible starts in November and December. The team finished 12-4 last year, but the 3-12 start doomed them. Part of this is based on Eddie Biedenbach's philosophy of playing several "guarantee" games (like Georgetown, Auburn, UNC and Ohio State this season...Tennessee, Duke, UNC and Georgia last year) a season. Our team tends to get crushed by these teams (thank you Auburn for NOT participating), and it plays on the kids heads a little. This season, I have seen a marked change in attitude. Maybe it's the maturing of the kids, maybe it's just what is happening inside the locker room. They are not quitting when they fall behind as they sometimes did last season. They are fighting for every point and acknowledge to themselves when they make a good or bad decision.

As noted above, everyone says that Asheville is a great town with stuff to do. The school is pretty small, with only 3500 students - what goes down on a Saturday night? 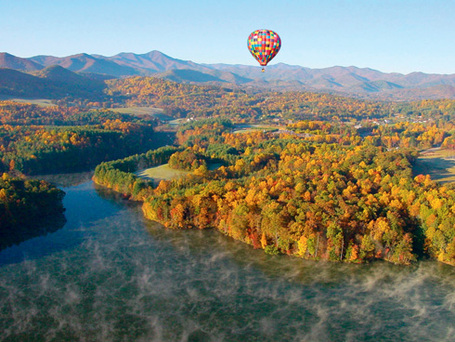 Autumn in Asheville.  via www.panacheprivee.com

Asheville is a great city noted for its independent restaurants, local breweries (we were voted the #1 beer city in America, beating Portland, OR last year) and live music. Music ranges from rock to blues to country...anything you like music-wise, you will find in Asheville. Elton John and Leon Russell just played the Civic Center last night, and, of course, it was sold out. Asheville hosted the Smashing Pumpkins for 17 days (nights) when they came back. Music venues are in bars, music clubs and arenas, so pretty much whatever you like you can find it here. We have our favorite restaurants - all local, and most featuring locally-grown vegetables, fruit, fish and meats - in downtown and just outside the city. Bouchon is a fantastic French restaurant owned by a Frenchman who operated restaurants in France, Dallas, and now, here. The Corner Kitchen (one of President Obama's dinner spots) features mostly local products and it is located near the Biltmore Estate's front gates. For barbeque fans, we have 12 Bones (another of the President's favorites) and Luella's (which is located down the street from the University).

Asheville also is located in the mountains, so during the days, hikers and bikers take to the trails. Now that the Blue Ridge Parkway is closed just south of town (think DC with a snowstorm...that's what the parkway gets, and there is no snow removal), many people enjoy walking along it and enjoying the views. And, if you need a big city, Charlotte is about 1 hour and 40 minutes away, Atlanta 3.5 hours, Knoxville is two hours...). And, of course, the Biltmore Estate, the nation's largest privately-owned home, is here in Asheville, and that is one of the top tourist attractions.

Asheville has played in the postseason twice in the past 10 years - winning the play-in game in 2003 and then making the NIT in 2008. What's the outlook for the Big South Conference this year and will UNCA UNC-Asheville be making another tournament appearance?

They have been picked to finish third this year behind Coastal Carolina and Winthrop. The Big South post-season tournament consists of first round games at seeds 1,2,3 and 4. The semi-finals and finals are held at the home arena of the top seed remaining (it has been the #1 seed lately, as you would guess). Asheville has a small group of fans who will travel to games, but two years ago, the semi-final round was at Radford, where we lost by just a few points, and last year it was at Coastal Carolina (where we were blown out by Coastal). Those schools are 4 hours away and it makes for a tough Thursday night for fans to travel down and back...and students just cannot do it. If Asheville was to host...or one of the schools closer to us was to host, I think the fans would be there in droves.

Quite honestly, UNC Asheville runs their athletics department on a shoestring budget. Schools like Coastal Carolina, Winthrop, Liberty and others who have football programs in the Big South have the resources to out-recruit us. They can jump on a plane and go to Chicago to get a kid. We don't do that. And, that makes it tough to compete for the top...but, that being said, Asheville is consistent in basketball. They need to take the next step with this group and get to the conference tournament finals and maybe get lucky enough to win. These kids want to go to a post-season tournament.

How do you see this game playing out? What do you think the final score will be?

For the game, unfortunately for Asheville, I think Georgetown would be smart to press our guards and make them get rid of the ball. Dickey and Primm are dominating the offense, and if they are taken out of the game, it makes it that much easier for the opponent. So far this season, they are the only ones really producing at the level expected. Cunningham is a nice big man with a soft touch around the basket, but not the dominating big man you see in the Big East. If the game follows suit, Georgetown will be off to a big lead before the first official time-out and Asheville will once again be forced to play catch-up. Unless something special happens, I see Georgetown winning by at least 20 - 30 points. There will be times that Asheville goes on small runs, hitting threes and getting inside for a loose-ball basket or two, but I would be surprised if the Bulldogs can hang with the Hoyas. Predicting a final score is tough, but how about 87-53.