The Casual Awards: The One When Henry Sims Made Us All Believers

Share All sharing options for: The Casual Awards: The One When Henry Sims Made Us All Believers

Come Monday, it'll be all right,
Come Monday, I'll be holding you tight,
I spent four lonely days in a casual Charleston haze and I just want you back by my side.

As usual we here at THE GLOBAL PHENOMENON are dishing out hardware to those most deserving.  Away we go... 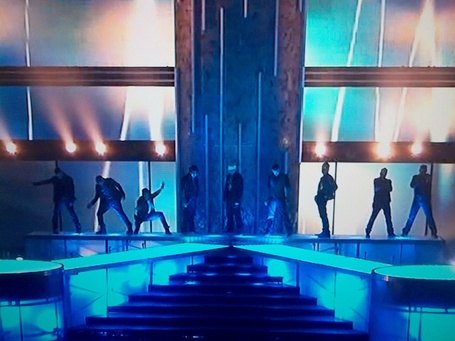 New Kids on the Block and Backstreet Boys AT THE SAME TIME was the icing on the cake of a spectacular Sunday evening.

The Chris Wright Heart of a Champion Award:
Henry Sims.  Yes!  4 points, 5 assists, 9 rebounds and 1 block in 15 minutes of action for our favorite regularman, who finally emerged as a legitimate weapon for the Hoyas.  Honorable mention here goes to Hollis Thompson, who also quietly put together his best game as a Hoya, finishing with 18 points on a dazzling array of pull up jumpers, threes, and drives to the hoop.

Better Late than Never Award:
Wofford/George Mason. Tremendous overtime matchup helped push the Hoyas tipoff past 8pm letting me catch the full hour of 60 Minutes upside, including Steve Kroft on Craig Venter, Armen Keteyian on Victour Bout and (what a treat!) Lara Logan on Mark Wahlberg. I switched over to ESPNU just before Andy Rooney so I could vomit up my lunch while watching that ridiculous Billy Donovan suckfest.

The Top Shelf Ciroc Vodka Out Of Reach Award:
The Six-minute stretch in the second half with Georgetown went on a 15 point run to go from two down to up by thirteen. That was it. Before that moment we had ourselves a seesaw basketball game. After that moment I was able to start checking airfares for the Final Four in Houston (fortunately, I already had Travelocity up on my laptop looking for hotels in Dallas for the Super-Bowl bound Redskins after their COMMANDING victory over Tennessee).

The Double-Stuf Oreo Award:
The idiots on this blog. Congratulations are in order for denizens of mother's basements everywhere for the more than FIVE HUNDRED comments put up in the game thread. Were a majority of them perhaps JGD and HireEsherick arguing with themselves? Perhaps. But this is a team effort.

'The Promise' Award.
Just as Springsteen sat on tons of songs for 20 years before releasing them in this year's Promise, Henry Sims sat on loads of potential before finally unleashing it on NC State. It's difficult to overstate his impact on the game but ranging from a jump hook, to a back door pass to Austin Freeman, to blocking Wolfpack shots, this is the type of game everyone expected of Henry and should it maintain, the Hoyas will be a very dangerous team. 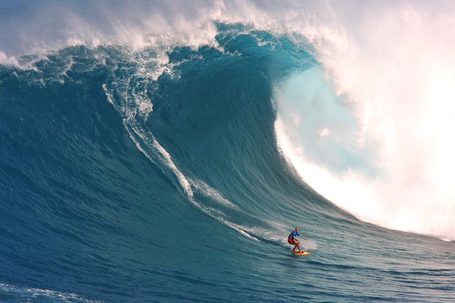 That guy is an idiot.  via plaza.ufl.edu

Unlike last season when depth was an issue, these Hoyas come at opponents in waves and don't let up.  JT3 is getting contributions from 10 different guys on the roster: Freeman, Wright, Clark, Hollis, Vaughn, Lubick, Sims, Benimon, Sanford, and Starks all played significant roles in Charleston.

Blake Griffin Award:
Austin Freeman. Griffin outright served the Knicks over the weekend and Austin Freeman did much the same against the Wolfpack.  You just have to see this (34 second mark for monstrous absurdity but really the whole clip is crazy).  As an aside, why do the Knicks make everyone they play look like the best players of all-time?  24 assists for Rondo?  30 and 30 for Kevin Love?

The Document Your Lunch Award:
McRib.  Oh, lord I had one of these for the first time ever this weekend and will likely be the first of a dozen I have before Christmas (or at least Hannukah for all of my fellow true believers out there). 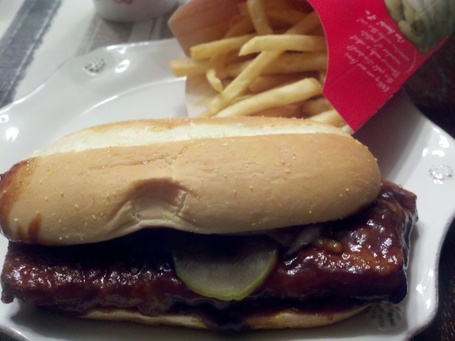 Is this the most underrated fast food sandwich of all-time?

Casual Delusional Award:
Georgetown Hoyas. Is there any question that this team is the leading contender for the national championship? Undefeated, top backcourt in the country, just dismantled an ACC team, unstoppable in the paint, and Austin Freeman served nuts to the entire team. AND HENRY SIMS FINALLY CAME ALIVE.

Casual Cynical Award:
Georgetown Hoyas. NC State might be the sixth best team in the ACC and played tonight's game without their best player.

General Electric Diversity of Product Offering Award:
Your Georgetown Hoyas. Sag on defense? POW three in your eye. Aggressive man to man? BAM backdoor cut. Shot clock running down? BOOM Chris Wright breaks you down off the dribble for a lay up. Georgetown looked unstoppable on offense last night.

Taylor Swift Telling Her Parents She's Dating John Mayer Trainwreck Award:
Watching America's young sweetheart trying to tame the John Mayer beast was a disaster waiting to happen. So too is watching Georgetown play zone defense. It is atrocious. It always ends in an open three or an open layup, and will ALWAYS end in a score. I assume the Athletic Department has enough money to provide JT3 and staff the ability to watch film. When that happens, I hope they pay attention to just how overwhemingly awful our zone defense is.

Henry Sims Is Awesome Award:
Aside from the points, rebounds, blocks and assists, an underrated part of Hank's game is his ability to set screens. He routinely seals one or two defenders on monster screens, allowing our guards to free up for open threes. On Austin's four point play against ODU that sparked our comeback, it was Hank's screen that freed him. Despite my happiness blackout in the second half last night, I noted three other times his big screens allowed open looks for our shooters. Great stuff.

Run DMC Award:
Recognizing outstanding contribution from Hollis, this award obviously goes to Mr. Thomson. Though this Reverend Run reality show nonsense has somewhat tainted Run DMC's contributions, longstanding classics like 'My Adidas', It's Tricky, and 'Walk This Way' are on par with Hollis's masterful game against NC State. We can only hope that this game will lead to the longevity that gave us Run DMC's last hit, 'Down with the King'

The Donald Trump "You're Fired" Award:
Heads have to be rolling at NBC and ABC this morning after their silly network executives decided to run a meaningless NFL game between the Giants and Eagles and the American Music Awards against the finals of the Charleston Classic on ESPNU.

The Jim Nantz Commenter of the Game Award:
Hoya Vey is this game's winner for providing consistent commentary in the gamethread from his mother's basement IN SPAIN.

Old Balls Award (Named in Honor of the Winner of (2010 Casual Bracket Contest):
The Oakland Raiders.  Great week to start both Darren McFadden and Zach Miller for your fantasy squad.  FAIL. 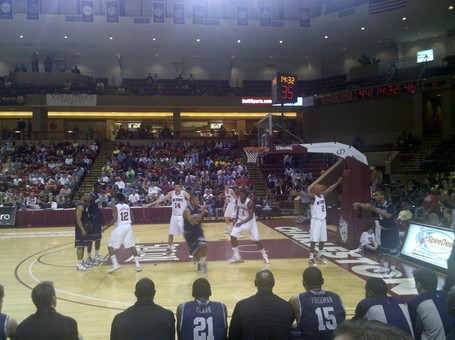 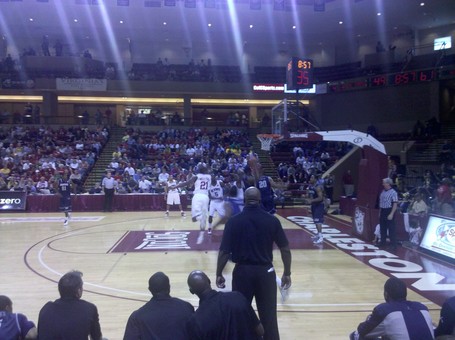 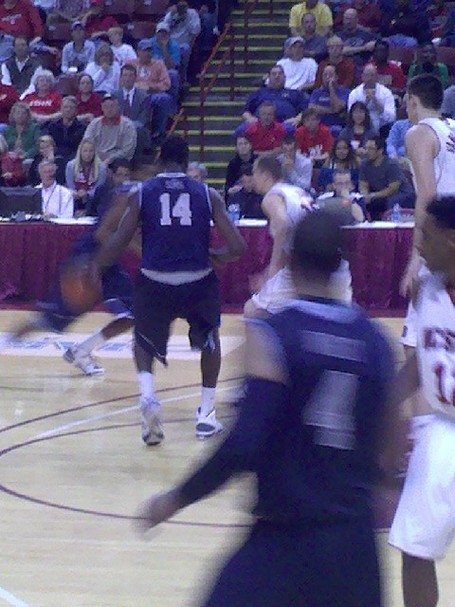 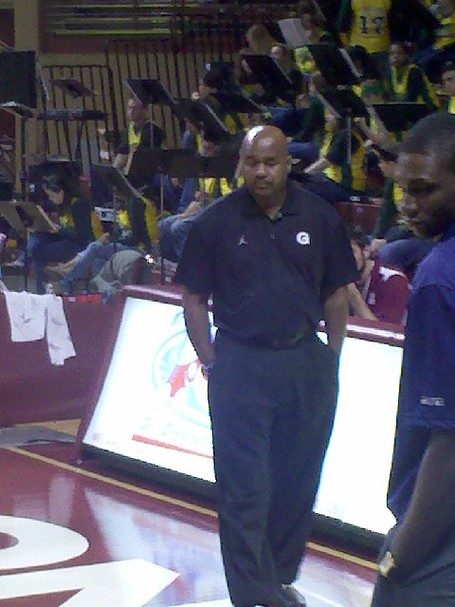 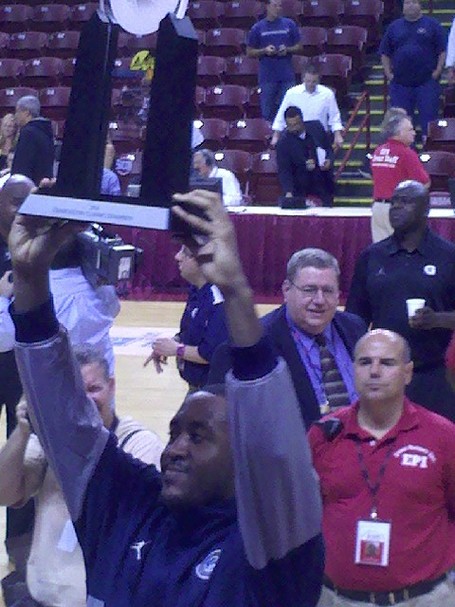 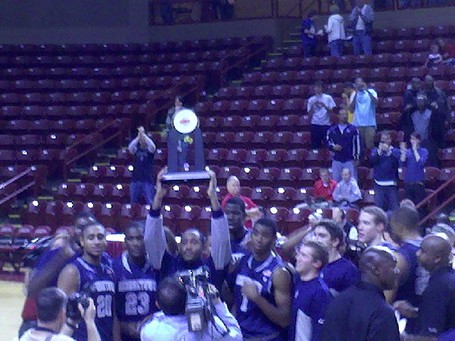