Share All sharing options for: The Casual Awards: Hoyas Wave Goodbye To Tulane

The Georgetown Hoyas continued to steamroll its non-conference competition last night with an easy win over the Green Wave of Tulane.  Now that the game is safely in the WIN column, we're rolling out The Casual Awards, where we at THE GLOBAL PHENOMENON dish out hardware after each game to those most deserving. Away we go... 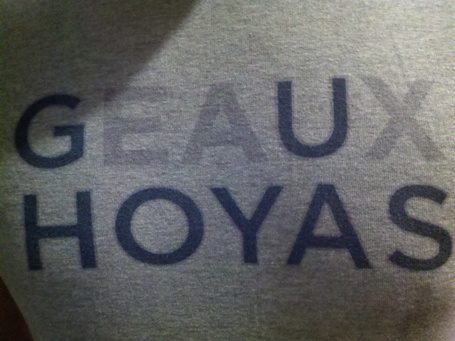 Chris Wright Jason Clark Heart of a Champion Award:
Jason Clark. That's all I have to say about that.

Patrick Ewing Jr. Memorial 6th Man Award:
Kudos to the Georgetown students for showing up big-time to the game last night.  I watched the game on the worthless ESPN3 feed and the students came across as involved and loud.  Keep it up, kids. 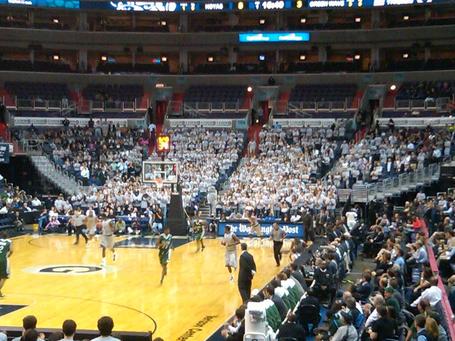 Captain Obvious Award:
Every pundit, critic and fan that talks about Georgetown's three point barrage last night. Yes, it is not sustainable. No, it was not the game plan. The guards took open outside shots all game because that is what Tulane gave them.  The Hoyas attempted 25 field goals from inside the three point arc (making 15) and a whopping 29 from behind it (making 12).

Sead Dizdarevic Fan Favorite Award:
Very apparent that Nate Lubick is a fan favorite. The hustle, the emotion, the passion. And oh, he is pretty damn good.

Jonathan Wallace Award for Being Best Point Guard in the World:
Chris Wright. The senior had more assists than points. He had some bad turnovers and questionable shots but overall Wright played a great game. When the guards are clicking, Georgetown is a very good team. I am going to give myself the captain obvious award now for writing that.

David Blaine Award:
JT3 for keeping things interesting and giving us a new defense: a 3/4 court press!  The press was quite effective in the second half leading to a few steals and even a ten second violation. Definitely pleased that coach is working with his players rather than forcing them to conform to a pre-existing mold.

The Jim Nantz Commenter of the Game Award:
Hoya Annoya is this game's winner of CASUAL SWAG for providing consistent commentary in the gamethread that captured the essence of being a Georgetown fan.

Brandon Bowman Award:
Given in honor of 'questionable' shots down the stretch when the line is in play, last night's Award goes to Jerelle Benimon for his heat check 3 attempt when the Hoyas were up by 19 and the line is 22.5. That is questionable play, my friend, and the good people in Vegas salute you.

Lightning Strikes Twice Award:
Austin Freeman.  Two games in a row with a 4 point play? I wouldn't put money on having another one this season but they're definitely fun to watch.

Deliverance Award:
Georgetown offense.  Given in honor of a plan that everyone watching knows is a terrible idea, this year's Hoyas seem determined to prove that they never need to toss the ball inside. Sure, Lubick and Sims have limited interior game but against better competition, we will not be able to simply chuck 3s.

Casual GameWatch Award:
Casual GameWatches across the nation were raging successes, but perhaps none moreso than in New Orleans, where the NOLA Hoyas group took triumphantly over a bar a mere two blocks from Tulane's campus.  Take that, Tulane! 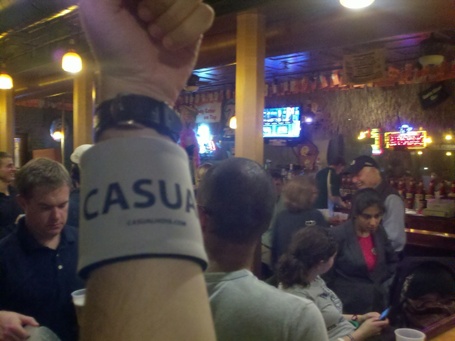 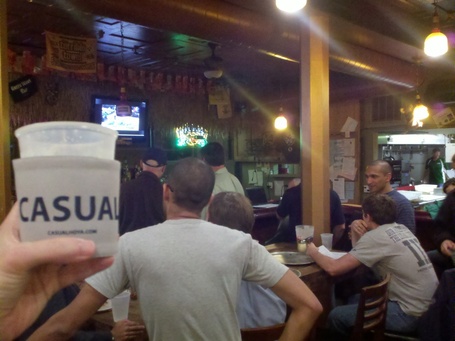 Sudoku Award for Impressive In-Game Entertainment Performance:
Given in honor of the most difficult puzzle in the morning paper, this award recognizes the random student who dominated the Triple Play Challenge, nailing the layup, free throw and three pointer. Random student, that would have been sufficient to claim some Casual Swag but electing NOT to go double or nothing? YOU WERE ON FIRE.

Jumble Award for Terrible In-Game Entertainment Performance:
Georgetown promotions staff. Jesus - the question of the day was to name the two teams that played in last year's NCAA championship game. Unclear why they keep running this worthless and watered down promotion. To top things off, they made it a multiple choice question.

Chris Wright Heart of a Champion Award:
Michael Freaking Vick! Wow! Nothing like getting home after the game and seeing the Eagles are up 35 points one play into the Second quarter.  Teddy LOVED the over. 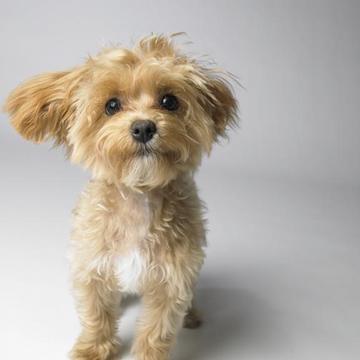 I loved the OVER in the Redskins - Eagles game.

Old Balls Award (Named in Honor of the Winner of (2010 Casual Bracket Contest):
Ryan Torain.  Are you freakin' kidding me?  How many fantasy games were lost (LIKE MINE WAS) WHEN THIS ASSCLOWN STRAINED HIS PRECIOUS LITTLE HAMSTRING IN PREGAME WARM-UPS AND DECIDED NOT TO PLAY?  Nearly dropped this goober out of spite this morning but can't because I have no spine.  The lesson, as always, never trust Mike Shanahan with anything ever having to do with fantasy football.

Ambien Award for Worst Jet Lag Ever:
Asia. Not even business-class upside can prevent crippling jet-lag on a flight from Japan. What time is it? What day is it? So exhausted.  Australia might be able to make a run for this award some day, but  there is NO REASON to ever go there after an experience like this.

Hugh Hefner Multi Tasking Award:
For all those stuck in the office last night. I got the benefit of listening to Rich Chvotkin on the radio while getting my Microsoft Excel on. Oh you want me to get a presentation to you by tomorrow morning, bossman? But what about the Hoyas? Not a problem as long as I can hear the smooth sounds of Chvotkin while using the offset function.

Lipitor Prevention of Heart Attack Award:
Listening to the Georgetown game on the radio instead of watching it on TV. There is something to be said for not having to watch the Hoyas play. I read that Chris Wright had another 1 on 3 fast break turnover, but if I don't see it, it doesn't count, right?! All I heard was "turnover by Wright". A turnover could be caused by so many things. I'd rather believe that Wright was savagely attacked by a Tulane player on the bench, yet the referees didn't see it and it was called a turnover. Yes, that's how Lumpy got his turnovers.

Nobody Circles The Wagons Like The Buffalo Bills Award:
The environmental community. When I posted "Georgetown Hates The Environment, Demolishes Green Wave 69-53" as the headline to last night's postgame, I assumed everyone would get my tongue-in-cheek corny humor. Georgetown doesn't hate the environment sillies, they just beat a team with "Green" in their name! Yet, to my surprise, there were 12 retweets of the article. At first I hoped it was the Twitter community loving my prose. In fact, it was retweeted by people like @UP_Environment, @saveourfuture, @gotgreenkits, @h2sw, @livegreenguide, and @save_your_green. Talk about dedication to the cause, I will definitely be throwing my Diet Dr. Pepper can in the right bucket today.

Dustin Hoffman Outbreak Award:
The Georgetown Hoyas. Is it just me or does this team get sick, as a team, really often? Last year the whole team was infected for the West Virginia and Notre Dame games and Julian Vaughn during a game in the Big East Tournament. This year already Vaughn, Vee Sanford and Markel Starks have missed games due to illness. Cripes. Do we need the team to start wearing those masks that people wore when everyone was afraid of Swine Flu? I hope it doesn't come to that.

Coastal Carolina is NeXt.