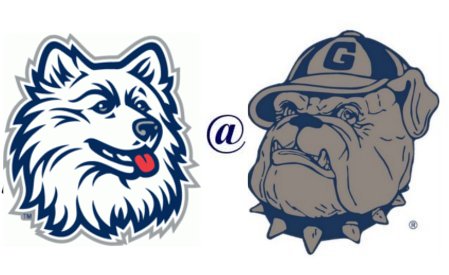 I was able to drown out my sorrows from the Marquette loss by shotgunning a few Natty’s before moving on to some Jaeger. Even so, for all of the optimism that I felt over the first 12 games of the season (ignoring ODU), losing to a now 10-5 Marquette team was a bit deflating. Hopefully it was just unlucky game number 13.

I think more students (including me) will be headed to the match up against 13th ranked UCONN than attended the games against powerhouses Harvard and St. Johns. You would think Georgetown would open up the residence halls a few days early to let students come back for the game, but that would make too much sense.

I am confident that we get our season back on track this game, but I’m going to stop by Towne and pick up a thirty of Keystone just in case.

Let's get one thing straight: OldHoya is not a fan of the UConn program. Not at all.

It's been a few years but OldHoya loathed the UConn fans who cheered for Nadav Henefeld as a standout and dedicated Husky. Inexplicably, they overlooked the fact that he played there for ONE YEAR before heading back to his native Israel. Sadly, it's a way of life with UConn players - on the bright side, Nadav headed home rather than being like most players and heading to jail. OldHoya was so incensed that he personally heckled Calhoun and yelled, "WHERE'S THE DOVE?" (Casual Note: OldHoya has mellowed with age and would have been far more aggressive as a student.)

It bears repeating - OldHoya is not a UConn fan.

Let's take a look at the trusty bulletin board...

Hoyas coming off a tight loss on the road in which they played well and probably would have won but for the absurdly silly three-point shooting of the Golden Eagles? Check.

UConn lacking size and depth in the frontcourt to cause Greg Monroe fits? Check.

Home court advantage in the Verizon Center that should be full of students and alums for the first time all season? Check.

An inflated line due to Vegas' memory of Georgetown's shellacking of the Huskies in Hartford last season? Perhaps.

The pick is Georgetown -4.5. If the Hoyas can't win in convincing fashion in a home game against a strong conference foe like UConn (in what should be a relative down year), then I am jumping ship early. Monroe needs to take 15 shots, and should put up at least 19 and 9. All Georgetown needs to do is have Vaughn and Sims foul the crap out of Stanley Robinson (seriously - use all 10 fouls between them), and have Jason Clark defend Jerome Dyson or Kemba Walker like a hawk. One of those clowns can beat us, but not both.

Win it for Patrick Swayze.

The Hoyas are currently 5-4 ATS (that's 'Against The Spread' for those just tuning in).