Sleeping With The Enemy Part II: The You Con Huskies

Share All sharing options for: Sleeping With The Enemy Part II: The You Con Huskies 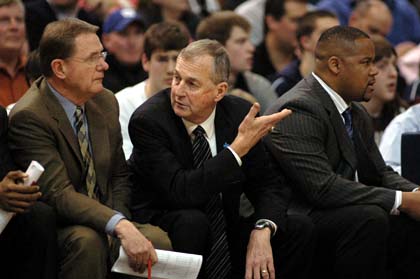 Didn't we pay them enough so they wouldn't have to steal laptops?

CH:  What can Georgetown expect from this year's Huskies squad? Who are the best scorers? Rebounders?

I still wish I knew what to expect from this year's squad, so I'm probably not the best person to be giving out info on this, but then again, no one knows what to expect. The only thing consistent about the Huskies has been their inconsistency (well, that and their total lack of a bench). The offense of late has has basically been either Jerome Dyson or Stanley Robinson carrying the weight for the entire team. The problem with that is that neither player is particularly efficient, especially Dyson who drives at the rim like he's a bull who has just seen red. Sophomore point guard Kemba Walker has the potential to be go off at any moment, but his scoring has suffered lately. He' has consistently gotten double digits in assists while missing almost as many shots.

When Georgetown walked out of UConn last January with that impressive win, did you ever think that the Hoyas would wind up missing the Dance and lose to Baylor in the 1st round of the NIT? As a UConn fan, what do you think went wrong for Georgetown last year?

I was shocked, both by the loss and then Georgetown's fall from grace. I really did feel that Georgetown had a great amount of potential and have to wonder if they were just became the victim of the Big East meat grinder. In any other conference, I have to believe a team as good as Georgetown would have made the tournament.

More 'Sleeping' after The Jump:

Who would win in a fight, Jim Calhoun or Geno Auriemma. What about a one-on-one game? In a related question, are there really hoops fans in Connecticut who care more about the UConn women's team than the men's team?

Calhoun takes the fight because he's a tough Irish bastard. The guy fell off a bike during a charity road race last summer, broke his ribs, and finished the race. He's beaten cancer more than once. He is the 21st-century Rasputin, only with real magic. (Ever been to Storrs? Try recruiting players to live there eight months a year without magic.)

Calhoun also takes the one-on-one game, because he has a pretty big height advantage, although Geno is a little younger, probably a little quicker and, since he's from Philly, a dirtier player.

As for the ladies, I [Kevin Meacham] am a fan and I'll watch whenever they're on TV down in New Jersey, but they're of course secondary to the men's team. That being said, there are lots of people who like the women's team more than the men. They are almost all over the age of 60, but they're out there.

Hypothetical situation: If you were buying something from Jim Calhoun for 90 cents, and you gave him a dollar bill, do you think he would give you a dime back?

In 9 of the last 11 seasons, at least one member of the UConn team has been suspended and/or arrested. How does that make you feel as a UConn fan and alum?

Secure.  You know the age-old question about who you'd want in your fox hole? I'm taking the guy crazy enough to violate a restraining order within 16 minutes of being served.

Seriously, though, it is a bit embarrassing. But it's also a little irritating, because it tends to devalue some of our accomplishments in the eyes of others and overshadows some of the good done by Coach Cal and the like (such as basically taking Caron Butler out of jail and turning him into a guy who does tons of charity work and makes appearances on Oprah).

Not saying it's right or anything, but UConn is probably no worse than most other major athletics programs in this respect. I'm sure Allen Iverson would have my back on this one. (Casual Note: We consider those to be fighting words.  Feel free to punch any UConn fan in the head when you see them).

UConn has built a pretty impressive football program out of nothing. Georgetown football has won 1 game in the last 2 years, any words of wisdom for us?

Scholarships, for one. You'd be amazed how many football players love playing for money. Just ask the SEC.  For two, be a state school that gets money and support from a favorable state legislature, so that you can build a state-of-the-art stadium and training facility to lure top recruits from the area.  For three, pad your win record by scheduling crappy Division I-AA teams, like Georgetown (Casual Note: We consider those to be fighting words.  Feel free to punch any UConn fan in the head when you see them).

Since those probably aren't options for the Hoyas, then I got nothing. There's always lacrosse, I suppose.

We always thought Hasheem Thabeet was overrated. Granted, we may be a bit biased because Roy Hibbert and Greg Monroe toyed with him during his collegiate career. Where did you end up on Thabeet on a scale between Sucks and Emeka Okafor? Do you think there's hope for Thabeet to have a legitimate career in the NBA?

I'm not sure Thabeet was ever overrated by people who watched him enough to look past the height. He is now what any reasonable person thought he would be: a great defense talent who is super tall and can change a game just be standing in the paint. The problem is that defense talent (he had 7 blocks against G'Town last year) came a very limited offensive ability (he had 4 points in that same game). He can score, but not on his own. I think his career will get off to a slow start as he adjusts to the speed and size of the NBA game, much like it did when he first got to UConn though. However, I bet he'll be a solid contributor for years to come. Is he ever going to be an All-Star? I doubt it, but I wouldn't be surprised to see him have a solid decade in the NBA where he is a valuable supporting piece.

Where do all the cool kids go on a Saturday night in Storrs, CT?

[Kevin Meacham points to self] The cool ladies were always in my room, bay-bee!

But seriously...either to one of the, like, four bars on campus or to the off-campus apartments. Or cow-tipping, which I hear is quite fun.