Share All sharing options for: The Casual Awards: Hoyas Buzzed by Golden Eagles

11-2, 2-1 in Conference, big game against UConn on Saturday. Georgetown is fine. GEORGETOWN IS FINE. Right? 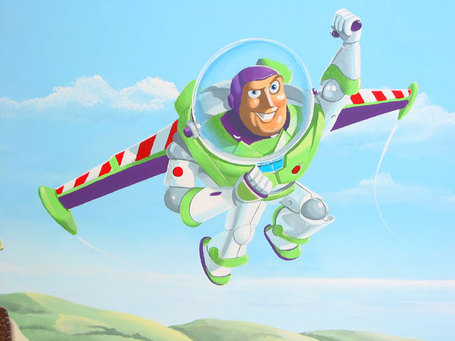 Buzz Lightyear To Infinity and Beyond Award:
Buzz Williams for nearly igniting his loafer rockets and flying into outer space but instead getting T'd up and handing Georgetown its first lead.

The James "Lights Out" Toney Award:
Marquette guard David Cubillan for going 6 for 6 from downtown for his career best 18 points. As a team, Marquette shot 47% from 3 for the game with a whopping 36 of its 62 points coming from behind the arc. Always tough to beat a team when it shoots like that. But don't take it from me. Here's what our buddies over at Marquette blog Cracked Sidewalks had to say about it:

The Jeff Green Final Four Award for Inexplicable Performance of Downside:
Greg Monroe. 6 shots in 34 minutes for our lottery pick, 1 shot attempt in the final 8 minutes. Monroe could be taking 18 shots a game and no one would have a problem with it. This was not a case of Greg 'letting the game come to him'. This was Georgetown's inability to feed the post all night, which in turn resulted in so many perimeter shots against a team of dwarves. I'm very angry about this.

The E! Network Best Game Thread Post Award:
This new Award, given to the best/most entertaining post during our In-Game Thread, is given to Casual Hoya lover 'Beast of the BE' for this gem:

Bruce Jenner Shoutout: Give me the ATM card BITCH!

Shoutout to the several thousand readers of this blog who read but never comment: Allow me to be your Khloe Kardashian, channel your inner Bruce Jenner, find your balls, and speak your mind! Stop letting the 5 dudes who post on this site monopolize your opinions about college basketball. If you read, post. And yes, in the spirit of reality tv, I did just reference Keeping Up With the Kardashians

The Craig Esherick Memorial Award:
JT3. No timeout down 3 with 8 seconds left to diagram a play? No in-game adjustment to find a way to get the best player on the court the ball? What? Scary stuff. 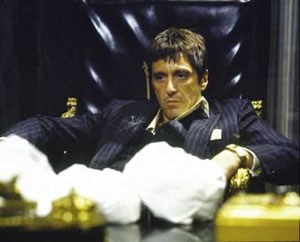 Marquette's obnoxious 46 percent shooting percentage from three. That's just ridiculous. RIDICULOUS. And remember the stretch during the first half when they had more three's than two's? Only one explanation for that: SCARFACE-ESQUE MOUNDS OF COCAINE before the game. Clearly that much cocaine makes a coach bald and leads to neck-removal surgery. (Casual Note: We here at Casual Hoya do not endorse drug use nor are we insinuating that anyone associated with Marquette University or its basketball team uses or endorses drug use. But there must be some reason that Marquette shot the lights out last night, and we will not stop until that reason is unearthed.) Now, back to the Awards...

Saturday Night Live Award:
It appears those Marquette fans are actually wild and crazy guys! I always like those large heads of celebs for unsolicited guffaws, but the Marquette fans really went beyond the call of duty last night, not only rolling out some of the D.C politicos in Nancy Pelosi, Harry Reid and Barney Frank, but also hoisting the gigantic heads of the always entertaining Conan O'Brien and Tom Selleck. I would have liked to see some local flavor added to the mix, however. Maybe one for Robin Yount or maybe even Andrew Bogut.

The Ominous Clouds Award:
It's a real bad sign that in a game where the Hoyas likely could have parlayed its height advantage into victory that Henry Sims played only 3 minutes and didn't register a blip in the box score. His box score lines are beginning to resemble those of the dearly departed Nikita. Welcome to club trillion, Mr. Sims.

The Craig Robinson Bouncer Award:
"It’s not cause you’re not hot, I would love to tap that ass. I would tear that ass up. I can’t let you in cause you’re old as f-ck. For this club, you know, not for the earth."

17 assists and 13 turnovers. This ratio is not conducive to winning games in the Big East. Against St. John's and DePaul you can get away with it, but not against the top half of the Conference. This is going to be a big problem going forward.

The NFL Network Award for Disillusioning Fans:
To the Big East Network, which apparently is only carried by two bars in all of New York. We just don't understand why it has to be so difficult for cable networks to show athletic events. One bar had 7 screens showing DePaul and Villanova. Really? Really? New Yorkers, check out this site: www.wherewewatch.com. It may solve some of your gamewatching problems and will tell you where to go for wings and stuff.

Gerald Riley Memorial Award:
Chris Wright for that awful last second shot. Off-balance, airball three-pointer to close out the game, even Nikita was able to hit the backboard dammit. JT3 may as well have put up two fists, passed the ball around the perimeter and had Wright throw up a Hail Mary, oh wait, that is what he did, minus the two fists. Where is Hibbert when we need him? And why did Vaughn attempt a three?

Van Halen "Jump" Award:
Why did we get out-rebounded by a team that started no one over 6'7''? Why did the 6'6'' Lazar Hayward lead both teams in rebounds? We dominated the paint in everything but rebounds? This game has last year written all over it. 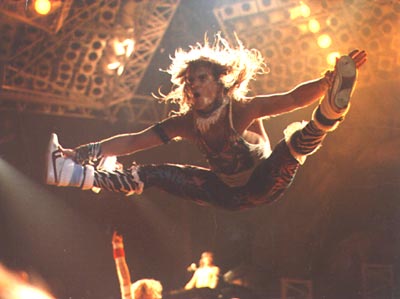 The celebrity fan of the game is to the guy at the bar in New Orleans who kept shouting 'Let's Go, G-Ro!' at Greg Monroe during the game. I later found out that he coached Monroe in hoops when Greg was just 7 years old. He said that Greg was playing AAU ball by the time he was 12 and that he was an excellent football player growing up. None of this made me feel any better after the loss, however. And none of that explains why our best player took 6 shots against a team that had no one taller than 6'7". I am very angry about this.

The Georgetown Hoyas are (still) a nationally ranked powerhouse.
UConn is NeXt.