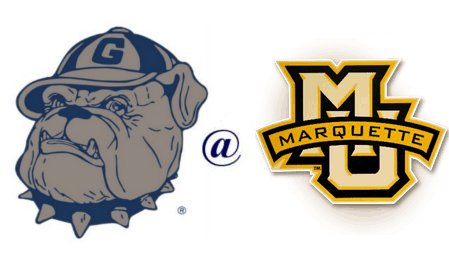 Over break, with little else to do, XBOX has become my religion…sorry Jesuits (I did try reading a book, but gave up five pages in). Thanks to Christmas break, I now have a reliable way to model games this season before they happen: NCAA Basketball 2010. I put it to use for the Marquette game and the current projection is that we win 71-27 with 50 rebounds, 23 blocked shots, and 32 steals. For that reason alone, I can say with confidence that we will be 12-1 tonight.

For anyone making the trek to Milwaukee, I salute you. I know that I will be at home, bundled up on the couch in an extra layer or two of body paint to keep me warm in these artic conditions. I intend to drink to another victory and to the fact that Henry Sims now has a Twitter account! I will now have a way to entertain myself during this coming semester. Thanks Hank!

Marquette wasn't a member of the Big East when OldHoya began his reign and he firmly believes that the only good thing about Milwaukee is that it's an hour from Chicago.

OldHoya is always pleased to see Jesuit schools playing well and notes that in Marquette's short time in the Big East, there have been some good games. OldHoya's highlight of the series was defeating a Dominic James-led Marquette team as the Hoyas celebrated the 100th Anniversary game.

A world traveller, OldHoya is proud to note that he's never spent any time in Milwaukee.

The Golden Eagles may have 5 losses and winless in the Conference, but don't let that record fool you. Marquette could very easily be 2-0 with impressive close-calls at 6th ranked West Virginia and against 8th ranked VillaAwful. This is a squad in rebuilding mode, but it is well-coached and dangerous. Marquette will be playing small ball in this one, so it will come down to Georgetown's ability to consistently feed the post without committing nonsensical turnovers. One would think that a team that is 11-1, unbeaten in the Big East, and ranked #12 in the nation wouldn't have such problems. That's where you'd be wrong.

Careless passing, an inability to feed Monroe down low (10 points against DePaul? Really?), and a lingering problem scoring against a quick, zone defense have been an achilles heel for the Hoyas in the past couple of years, and I don't expect the magic air in Milkwaukee to cure them, especially against a hungry Golden Eagles squad that has already beaten Xavier and Michigan and is looking for its 1st Conference victory.

Who wants this one more? Can this Hoyas team cover a 2 point spread in a hostile arena in January?

Hopefully my opinion changes by March.

The pick is Marquette -2 and I'm going OVER with a final score of Marquette 74 - Georgetown 67.

The Hoyas are currently 5-3 ATS (that's 'Against The Spread' for those just tuning in).