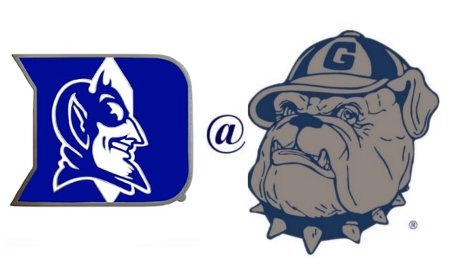 The plan is to paint my body for the first time. I have been hitting the gym every day for the last two weeks to make sure that my beer gut is not as big as it usually is. When Obama sees me on the jumbotron,I have to be looking good. I made a trip to Arlington with my friend Dave this week to pick up some body paint. The first stop was Michaels, because they have arts and crafts items. However, they were trying to sell us straight paint and I’m really not trying to get lead/acrylic/…? in my body. Party City had what we were looking for thankfully.

I am pre-gaming right now for sitting out in the cold for more hours than one could possibly imagine. I want to be front row. Hypothermia, bring it on. Let the slaughter of Duke begin. Hoya Saxa!

This is not a team that OldHoya likes. At all. On top of that, OldHoya's gotten to know and become friendly with lots of refs. But not John Cahill and promises to be all over that smug zebra should he step on the court.

Obviously, there have only been a handful of games between the two but that's enough to establish a rivalry. Few can forget the loss that the Hoyas took at teh hands of Duke in the 1989 NCAA regional and OldHoya prefers to focus on the payback game 2 years later when the Hoyas took Duke down 79-74 at the beautiful Cap Centre. Zo and Mutombo simplly dominated the Duke front line and held Duke's big three to a woeful 32% for the game.

Certainly recent memory is lukewarm with the program changing win at Verizon finally showing the potential of Coach Thompson's program and the disastrous loss last year at Cameron.

In a nut shell: Let's beat the f--king Blue Devils and then meet OldHoya after the game to casually celebrate the game.

I'm pretty surprised at this line, because I thought that the Hoyas would be at least a 2 point favorite playing at home in front of a rowdy Verizon crowd. Home court advantage aside, I think Georgetown matches up well against Duke, and should be able to exploit Duke's man-to-man defense by back-dooring the crap out of them to get some easy looks inside.

Georgetown will win this game for 2 reasons:

1) Chris Wright will have more than 10 points in this game, which means guaranteed victory.

2) Obama will be there with his manservant ex-Dukie Reggie Love and likely rooting for Duke, which means guaranteed victory.

It should be no surprise then that the pick is Georgetown +1, with a final score of Georgetown 76 - Duke 71.

The Hoyas are currently 8-7 ATS (that's 'Against The Spread' for those just tuning in).