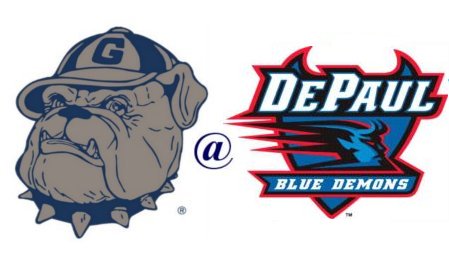 If a team goes 0-18 in the conference, I think it is safe to assume that they are not a very good team. However, if we look beyond this game and prepare for Marquette, then we will lose. After the first week of Big East play, I'm starting to believe that any Big East win is a good win.

I would be ashamed if we were to hand DePaul their first win in over 20 conference games (not since the Spring of 2008 against Cincy).

We are a top caliber team and we need to avoid losing to bad programs like we did down the stretch last year. Now that the Big East season is upon us, the students are becoming more and more excited that this year will be better than the last. Hoya Paranoia is kicking in, and while it is nice to read on Facebook and Twitter that Greg Monroe, Austin Freeman and Henry Sims are all "Chillin," it is much more exciting to run over teams. Here’s to a New Year of Big East Basketball and to my New Year’s resolution of starting things off right! And by right, I mean no more puking in Village B stairways. And no more losing to St. John's. One out of two ain't bad, right?

I may be OldHoya, but I'm not StupidHoya, and I refuse to talk about DePaul since it is not a true Big East conference team. Chicago is one of my favorite towns, however, and I recommend a nice deep-dish pizza before the game and washing down an easy win over this CUSA opponent with a Chicago-style hot dog. Why is this game at 2pm on a Sunday during the final week of the NFL season? Don't these people go to church? Everything about DePaul just makes me angry. I need a cocktail.

I hope you all had a Happy New Year and were able to lavish your significant other with the winnings you made on our FREE MONEY St. John's +10 and the UNDER picks. If you don't have a significant other, that's an even bigger win.

The Hoyas travel to Chicago to face DePaul, the worst team in the history of the Big East. Last year's final home game against the Demons was a complete sh-tshow, perhaps the most disgusted I have ever been with the Hoyas in the JT3 era as they barely beat Depaul in a must-win game and failed to break the 60 point mark. For some absurd reason JT3 didn't start Jessie Sapp on Senior Day, and for some absurd reason DaJuan Summers continued to launch 3s with at least 25 seconds left on the shot clock on possession after possession.

This Hoyas squad, perhaps primed to crack the top 10 should they beat DePaul today, is really not that good. 'Not that good', however, does not mean that they can't cover 10 points in Chicago against a team that belongs in the Conference USA. The Hoyas should be able to dictate the tempo here and DePaul doesn't have enough talent in the paint or on the perimeter to give the Hoyas trouble. The only way Georgetown doesn't cover this spread is if they come out flat and spin their wheels all game long. I'm not putting that past them, but the pick is Georgetown -10, and I'm going OVER with a final score of Hoyas 67 - DePaul 55.

I'm on Mike Leach's side in this whole Texas Tech scandal.

The Hoyas are currently 4-3 ATS (that's 'Against The Spread' for those just tuning in).