Sleeping With The Enemy: Enemy #1

Share All sharing options for: Sleeping With The Enemy: Enemy #1

We're kicking off Grenade Week here at the GLOBAL PHENOMENON that is Casual Hoya by bringing you everything you want to know about the evil Syracuse Empire.  Special thanks to our enemy Troy Nunes is an Absolute Magician for providing the answers to our penetrating questions.  Be sure to check out that site for our answers to theirs.  Mr. Magician, this Miller Lite is for you.  It doesn't get any bigger than Georgetown-Syracuse on Big Monday, so buckle up. 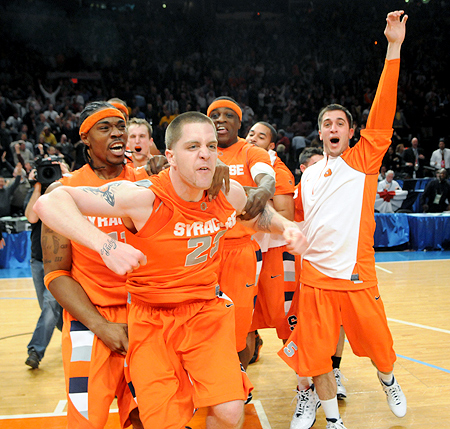 I'm coming for your daughters! via blog.syracuse.com

CH: Did Carmelo Anthony accept his payment from Jim Boeheim as one lump sum or in an annuity?

Every Syracuse alumni is required to drive to Carmelo's house once a year, deposit a bag full of money with a dollar sign on it on his doorstep and immediately leave before the Dobermans attack. It keeps Boeheim from having to do it.

What can the Hoyas expect from this year's Syracuse squad?

And teamwork. Unlike past years when the team has been very focused on 1-2 players, these guys are probably the best "team" Syracuse has had in a long time. Even though Wes Johnson is the best player on the court, they're not all playing to get him stats. They're great passers and they play relatively smart. They have a tendency to get overpowered down low, which is weird considering the big bodies we have, but otherwise they're pretty complete in every category.

Who are the best scorers? Rebounders?

If we need a quick two, Wes Johnson is the go-to guy. He scores 20 a game pretty consistently but he's also quietly end up with 12-13 rebounds and you'll wonder when that happened. From the outside, I believe you're familiar with Andy Rautins. He doesn't have Devendorf to nuzzle up to anymore but he's become the team's emotional leader and clutch three-point shooter. Kris Joseph is a quality scorer off the bench and can provide a spark when needed.

Otherwise, the Orange get random 15-20 point games out of Arinze Onukau, Rick Jackson, Scoop Jardine and Brandin Triche, so you never know who's turn it is.

More with 'Cuse after 'The Jump':

Wait, Cuse isn't actually going to play that damn 2-3 zone that Georgetown has no chance against, right?

The key to beating the zone is the same it always has been. Shoot the lights out from three or stretch it so far that the big men can take over the paint. Maybe a little of both. So far, only Pitt has been able to crack it due to their brute force (and some lame refs).

What were your expectations for the team going into the season? What has changed to make the zone so much more effective? Do you know how much we hate Syracuse and how painful it is to ask serious questions about your school?

My expectations were that Syracuse would be a fringe Top 25 team that would gel as the season wore on, make the tournament and, God willing, go as far as the Sweet Sixteen. Now? The sky is the friggin' limit. And the reason is the same reason to your 2nd question...just unbelievable teamwork. Like I said, as much as Wes is the superstar and Andy is the leader, this is the best "team" Syracuse has put on the floor since 2003.

And as much as enjoyed parts of the Eric Devendorf and Paul Harris era, we don't miss them when it comes to defense. That's for sure.

Yes, I understand how much you hate us and how painful this is. I'm doing my best to reel it in and not be too much of a c***sucker about this.

Wes Johnson attended 3 high schools - putting up solid numbers along the way and then had 2 productive years at Iowa State before blowing up at Syracuse, likely to make him the most recent player to stop by Syracuse for one year before hitting the league. There's little question that he'll be better than Donte Greene but what's his ceiling as an NBA player?

Wes is one of those guys whose ceiling is constantly being raised so...hell if I know. This is a guy that neither Syracuse or Georgetown even thought twice about coming out of high school. Now? He's a POY candidate and a lock for the lottery. And he's still getting better.

The quick answer is that he'll be a much better Hakim Warrick, but honestly he could be so much more as well.

Gtown had some well publicized infighting last year but how awful must Devendorf and Paul Harris have been? They were 2 of Cuse's best players and played in the Six Overtimes game (that commercial sucks) and Cuse is demonstrably better without them. Do you feel good that they left to make Cuse a better team or bad for them as they languish in the D-League while watching Cuse play better?

I definitely feel bad for them. Especially Devo, who has the sympathy of no one (especially you guys). He left not so much because he knew he was ready for the NBA but because he needed to start providing for his family...not to mention the "issues" he needed to leave behind at SU. He got some really bad advice from his initial agent and may have screwed himself out of a decent European contract, which is where he should have gone to begin with instead of wasting time with the NBA dream.

As for Paul Harris, he was a character but you can't help but look at his time at SU as disappointing. He was supposed to be what Wes Johnson became. Which is probably also a big reason he left...he knew he was going to lose a ton of minutes (and stats) to Wes this year.

Personal stuff aside, yes, I'm glad they're not on the team right now. Devo had a chip on his shoulder the size of Michigan and Paul's decision-making was a liability. Keep both of them on SU this year and we're not talking about No. 1 rankings and Final Four opportunities, we're talking about clashing egos, poor decisions and a disappointing year. Plus, I think Boeheim probably would have committed homicide.

It's a great lesson, much like when Donte Greene was here, that having star players isn't always a great thing for how a team works.

We recently heard a rumor that Syracuse cheerleaders work part-time at the DMV - please comment. 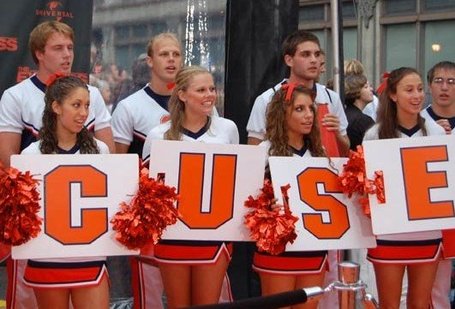 Did we spell it right this time? via sammyvegas.files.wordpress.com

Can you work part-time at the DMV? That doesn't seem possible. I would check your sources on that. Though I can confirm that anytime someone requests a personalized Georgetown license plate, a Syracuse graduate runs it through their ass-crack before handing it over. FYI.

As a Cuse fan, if Devendorf punched your daughter, would you forgive him?

If my daughter grew up to root for Georgetown, yes.

Greg Paulus walks into a bar in Syracuse - does he get a free drink for being an awful QB at Cuse or does he get punched in the mouth for having gone to Duke?

Syracuse fans would treat Greg Paulus the way Roger Dorn treats Ricky Vaughn in Major League after finding out that Vaughn slept with his wife. We'd punch him in the face, help him up off the floor, hug him and then chug a beer.

Have you seen Jimmy B's golf swing? Many men have swooned over that stroke, it's no surprise that the ladies love cool JB.

Why do Cuse students storm the court so often? Shouldn't there be a standard, maybe beating teams ranked in the Top 2, perhaps?

Do we storm the court so often? I think we've only really done it when we beat you guys. You could certainly say that we shouldn't do that. But I'm not opposed to storming the court every so often. Keeps you limber. I don't think we'll do it for a while, but if SU ever dips again for a 2-3 year stretch (unlikely), the fans might need a little boost. Hopefully, you'll be there to lend us that favor.