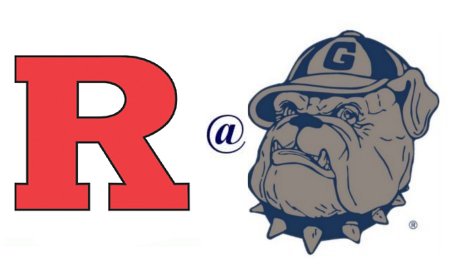 Somehow I frequently write this while somewhat inebriated. This being a Friday night, I have had a couple (seven) beers. Nevertheless, I will be waking up in a few hours to don the face paint and the wig and bleed a big puddle of blue. If anyone has some water and aspirin, bring it.

Before Rutgers football emerged, no one would have known that it was the state university of New Jersey (honestly N.J. State would be more appropriate). And while Rutgers football would destroy Georgetown’s pee wee squad (assuming we still have one), Georgetown should be able to imply more than a flesh wound against the Scarlet Nights.

While New Jersey is my home (and the home of 75% of Georgetown students…or so it seems) and I casually check in on RU football, I hope Jerrelle, the Doctor and the rest of the team prove that we can consistently beat teams that are clearly worse than us (I am still bitter about St. Johns). Hoya Saxa!

So this is the break in the middle of the rough patch? A reeling Rutgers team whose beat player has been known to drop 50 in international matches? Oldhoya may not know much but he knows that this game can be a challenge if the Hoyas don't lock Rosario up early.

As luck would have it one of Oldhoya's best friend's was in town this week - Paidforahoya. He sent his son to Gtown but attended Rutgers and passed along a Jimmy V story. V was the starting point guard and his roommate and best friend was Bobby Loyd, Rutgers last all-American. V told Paidforahoya and some others at school that he was going to hold Loyd to single digits against Bucknell and that they should bet on it. Sure enough Bucknell opened in a zone, Loyd popped out and was open and V swung the ball the other way. Coach rips V who claims that he didn't see Loyd and keeps doing it for the whole game. Loyd finishes with 7 and V takes hell after the game, which Rutgers won convincingly. Next night, V strolls by Paidforahoya and the other regular folk while drinking a beer and asks for half their winnings.

The pick is Rutgers +21 and I'm already spending the money. Georgetown is 2-4 ATS at home, and there's not much about Rutgers that is going to bring everyone's 'A' game out from the dorms. I think the Hoyas should open up close to a 20 point lead down the stretch, and Rutgers will chip into it against our vaunted bench which should get a lot of playing time.

The Hoyas are currently 8-5 ATS (that's 'Against The Spread' for those just tuning in).