Sleeping With The Enemy: Born to Rutgers

Share All sharing options for: Sleeping With The Enemy: Born to Rutgers

As usual we here at the GLOBAL PHENOMENON that is Casual Hoya are bringing you everything you need to know about our upcoming opponent. Special thanks to our friends at Protect R Turf (The 'R' stands for Rutgers, get it?) for answering our penetrating questions.  And please check out Protect R Turf and yet another Rutgers blog who decided to take us on called On The Banks of the Raritan (The Raritan is a river) later today for our responses to some of theirs. Fellas, this Miller Lite is for you. So sit back, relax, revel in the glory of the Pitt win and know that there is just no chance that Georgetown loses to Rutgers on Saturday. Because tramps like us, baby we were born to run. 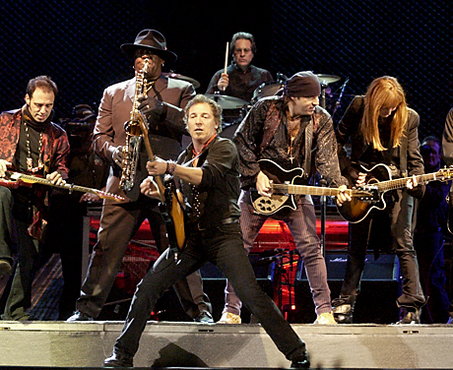 The Boss has likely never been to a Rutgers game. via www.showclix.com

CH: Many people thought that signing Mike Rosario marked a sea shift that would lead to more of Jersey's finest heading to Rutgers. This hasn't happened - is it just because Rutgers spent their entire booster bonus on Rosario or do the players realize that Fred Hill can't coach?

New Jersey is a hotbed for high school hoops, but when you see Rutgers struggling to win a single game in conference it's a big turn-off to high caliber recruits. Losing breeds misery, and many of these high school players are used to winning on the HS level. That's why I think a lot of Rutgers recruits have left over the past 2 or 3 years. Over the last few years Rutgers has seen 5 different players leave the program: Greg Echenique, Corey Chandler, Justin Softman, Earl Pettis, and Christian Morris. And now with all the turmoil around the program, there remains doubt whether Mike Rosario will be back for his junior season. Why go to Rutgers when you know you won't be there in a year or two? Hill, Rosario, and Echnique were supposed to be the building blocks for Rutgers future, but now it looks like all three could be gone next season.

Even with New York so close, most students are sticking around campus on Thursday/Friday/Saturday night to hit up the house/frat parties on campus. New York bars are expensive, and the one thing most college students don't have is money. If you're ever in the New Brunswick area try either Olde Queens Tavern or Stuff Yer Face located on Easton Avenue, they are perfect college bars. (Casual Note: Olde Queens Tavern looks like it has some ladies).

More with Rutgers after 'The Jump':

What can Georgetown expect out of this year's Rutgers squad? Who are the best scorers? Rebounders?

Expect one good half, and one bad half. That's been the story of the season for the Scarlet Knights. They'll either play well and hang around for the first half and get slaughtered in the second half (see RU-Cincy), or they'll dig themselves a huge hole and then rally back in the second half to keep the final margin respectable (see RU-UNC). This team is incapable of putting together two good halves of basketball.

Rosario is the team's best weapon, but he's struggled of late from the floor (struggle is an understatement, he's been abysmal). Freshmen Dane Miller and Jonathon Mitchell have stepped up of late to fill the scoring void while Rosario's been off, but they remain extremely inconsistent. Center Hamady Ndiaye has stepped up his play since the loss of Greg Echenique and "H" leads the team in rebounding and is one of the nation's leading shot blockers. For the Knights to have any chance he'll need to neutralize Greg Monroe in the middle.

Rosario can definitely play and made a real name for himself by dropping 50 on France as a member of the Puerto Rican team. Seems odd because he actually isn't from Puerto Rico and can't speak any Spanish.  With his tattoos, this cements his street cred and are you willing to take a stand on whether he's embraced his roots and will be DJ Mikey R representing PR on the next Jersey Shore?

He'll be on next season repping as Mikey Bricks. He'll be the one that spits a big game, but when the opportunity comes he just can't score.

Do you know or know anyone who knows any of the cast members of ‘Jersey Shore'? If so, can you share something interesting with our audience that probably cares more about the show than the Hoyas?

Unfortunately (well, actually probably fortunately), I don't know any of the cast member of 'Jersey Shore'. But as a person who used to live near the beach, and lived only a few miles from Seaside Heights and Point Pleasant the show is a pretty accurate portrayal of the trash that washes up on the beach during the summer months at the Jersey Shore. 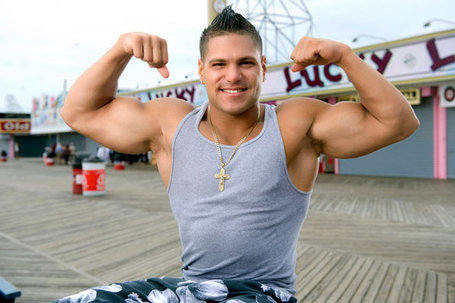 New Jersey is famously known as "The Garden State." Please document at least one time in the past 5 years when you or anyone you know voluntarily ate any fruit or vegetable grown in Jersey.

Do fruit-flavored vodkas count? (Casual Note: Why the hell not?)

Clearly the single best thing ever to come from Jersey is Bruce Springsteen. We at CasualHoya (aside from the moronic LordNick who has staunchly refused to see The Boss on any of his stops in DC) strongly endorse all things Bruce and believe that ‘Jungleland' and ‘Atlantic City' are two of his best songs overall and specifically, the best to reference Jersey. As Jersey residents, do you have those songs on repeat at all times in your Camaro's tape deck?

Of course. Like they say here in New Jersey, there are two bosses: Bruce and Tony. If you don't like it you can just gggggggeeeeeettttt outtttttt.

My Top 10 Bruce Songs of all-time:

(Casual Note: Rutgers might be awful, but this Rutgers dude is pretty casual.  But no Badlands?  Do you think that crowd in Barcelona in the link was having a good time?)

Are we at the point yet where Rutgers is waving a white flag in basketball and is simply focused on football?

Absolutely, personally I am counting down the days until the Scarlet/White Spring football game. Listen, Rutgers basketball is in a similar place that the Rutgers football team was in the late 90's and early 00's where they were awful and no one cared about the program. The RAC  (Rutgers homecourt) used to be one of the toughest places to play in the Big East, but now the opposing fans tend to outnumber the Scarlet faithful. The program is in a bad place, and the basketball team needs their own version of Greg Schiano to come in and lift this program up.

Rutgers has no depth at the center position behind Hamady Ndiaye, and the frontcourt is Georgetown's strength. This one is going to be over early, and could get very, very ugly. Out of all the teams in the Big East, I think RU matches up with Gtown the worst, and it's going to show on the scoreboard.