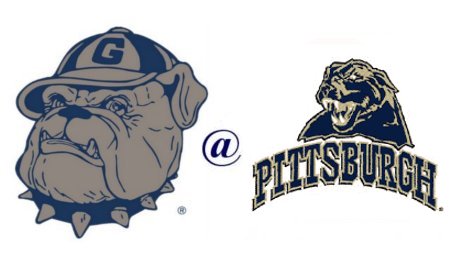 My semester is already starting to go downhill as I fall behind in work (yes, one week into classes). Hopefully our Hoyas tear up the Big East, while I try to pass at least a couple of my classes. As one astute, drunken Senior proclaimed on Copley lawn last Spring to a passing tour group, "Go to your Harvards and your Yales, we have grade inflation!" Amen to that.

One place where few people want to actually go to college is Pitt. I will not be traveling to the ArmPitt of America for today’s game. I will definitely watch the game, although in a more sober state than Sunday’s battle, because I am not in the B-Frat and thus do not drink 6 days a week.

A win would be beautiful because somehow Jamie Dixon has Pittsburgh atop the Big East. He must have robots playing out there because no one thought Pitt would be this good again this year. I feel confident that if our bench gives us more than five points we will at least have a shot. Hoya Saxa!

OldHoya has been toiling with the Pitt Panthers for years and is apprehensive about tonight's game. Similar to Nova, there's little love lost with the Pitt crowd and OldHoya remembers games from 3 separate arenas:

A long time rival, after joining the Big East in 1982, OldHoya is concerned about this year's Pitt team but believes that the key to the game will be neutralizing what can be a brutal crowd.

Dearest JT3 and the Hoyas:

As fans, it is very difficult for us to watch when the team gets down by double-digits in the first half in Conference games against ranked opponents. STOP DOING IT.

Despite the loss at Nova, I liked what I saw out of the team as they fought back, and specifically Greg Monroe's ability to lift the team on his shoulders and refuse to lose. Yes, they still lost, but you get my point. This is not last year's Hoyas.

Pitt traditionally is one of those teams that plays great defense and likes to grind it out on both ends of the court, a tempo that suits Georgetown just fine. Georgetown matches up well with Pitt and Monroe can have a decent game and get some of Pitt's bigs into foul trouble. We all know the Hoyas aren't a deep team, but Wright, Freeman, and Clark can cause those evil Pitt guards fits.

Stat to remember: The Hoyas are 12-0 when CW scores in double-digits, and 1-3 when he doesn't. I think Wright goes for 13+ in this game, and the Hoyas will win outright.

The Hoyas are currently 7-5 ATS (that's 'Against The Spread' for those just tuning in).