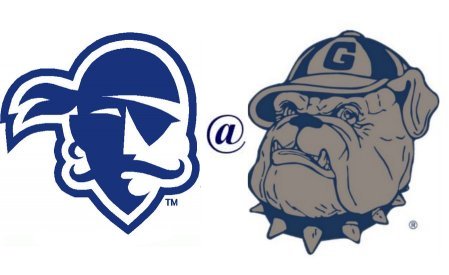 Holy [insert expletive]! Austin Freeman is my messiah, sorry Jesuits. He must have kept off the steak Friday night and eaten a big bowl of Wheaties in the morning.

However, as great as this feels, last year we let the wins get to our heads, so we must look forward to a very talented Seton Hall. Leaving the Prudential Center last year was more unpleasant than having my fingernails pulled out one by one, not that I have ever experienced it, but I can imagine it would be somewhat painful. And even though Jeremy Hazell looks a little bit like Dumbo, he can play basketball pretty well. In a tough Big East conference, this is a must win game.

I only have one grievance to voice. The problem with a 7:00 pm start is that I will be running from my class to make it there. Georgetown seems to have its priorities mixed up, having classes interfere with basketball games. Let's run up the score. Hoya Saxa!

OldHoya is still recovering from Saturday's drama but can sum up his feelings about Seton Hall pretty succinctly: He hasn't given them a moment's thought or taken them seriously since PJ Carlisemo was their head coach (Casual Note: might have been a mistake to overlook them based on last year's dismal performance).

Might also be time to credit OldHoya's Wife with leading the charge to beat UConn - after sitting with OldHoya for the first half, she returned to her normal seats and Austin felt inspired to drop 28. Though he enjoys sitting with his wife, OldHoya recognizes that Gtown needs a helping hand and she'll be sitting in the second half seats.

Facts you need to know:

In Seton Hall's 65-60 win over Georgetown last year, the Hoyas lost a game in which they managed to dictate the tempo, primarily due to horrendously sloppy play at both ends of the court. I know this because I was there, and it was awful.

This Seton Hall team is primarily the same as last year's, so assuming the Hoyas can contain gunner Jeremy Hazell, I'm tossing out the idea of this turning into an offensive explosion. I'm also putting a lot of faith into that last bullet point, because I think Georgetown's defense is good enough to keep the Hall in the 60s, and Georgetown's offense against a relatively small Hall team (one dude over 6'9", and he's a 340 lb freshman) should be good enough to climb into the 70s. The Hall shoots only 33% from 3 (Georgetown is closer to 37%), and the Hall is woeful from the charity stripe (65%). Against one of the better defensive squads in the country, these stats don't add up to a cover.

The pick is Georgetown -7, and I'm going UNDER with a final score of Georgetown 74 - Pirates 66

The Hoyas are currently 5-5 ATS (that's 'Against The Spread' for those just tuning in).