Sleeping With The Enemy Part 1: The Kids in the Hall

Share All sharing options for: Sleeping With The Enemy Part 1: The Kids in the Hall

Due to the enormous popularity of last week's two-part extravaganza that helped make Casual Hoya a GLOBAL PHENOMENON, this installment of Sleeping With The Enemy is once again going to be an epic, all-day affair.  In this morning's Part I, Seton Hall blog Gonzo Ball is providing the answers to our penetrating questions.  In this afternoon's Part II, we get our revenge by answering some of theirs.  And yes, all questions this morning are in blue in honor of the Hall's colors and as a political statement to assist the helpless aliens in AVATAR who had their forests destroyed by the United States military.

What's the point spread in the Seton Hall game?

CH:  What can Georgetown expect out of this season’s Seton Hall squad?

GB:  The Hoyas are in store for a hard fought contest.  Take a moment to quit your snickering.  Sure, Seton Hall's record is unimpressive at best (10-5, 1-3), their best win of a "soft" non-conference schedule consists of Ivy League Cornell and it took a 35 foot buzzer beater to secure a victory in their home opener.  That St. Peter's College can be a tough out... for Monmouth.   All jokes aside, Seton Hall has played up to the level of their competition once Big East play began.  They took WVU to overtime, led SYR by 12 in the first half and 6 in the second and was up 3 points on the Huskies with 6 minutes to go.  The biggest problem for the Pirates has been the inability to finish their opponent, which has sorely lacking until Saturday's defeat of Cincinnati.

In the remarkable almost-win against West Virginia in which the Hall erased a 10 point deficit in the final minute to force OT, it seemed like Jeremy Hazell was shooting 3s from nearly half court en route to 41 points.  Is it safe to say that if Georgetown locks down Hazell then the Hall has virtually no chance of winning?

Jeremy Hazell is the epitome of a volume scorer. He's currently shooting 40% from the floor and 33% from long-distance.  He has undoubtedly hit his share of clutch shots (most recently against WVU) throughout his 3 years at The Hall, but I'd be lying if I tried to deny that he hasn't shot the Pirates out of a game or two.  The knock on Hazell has has always been that he's a bit of a chucker.  Ok, a "bit" is an understatement, Jeremy has never met a shot that he doesn't like.  In the WVU game, Jeremy was 2 of 14 from 3PT distance, refusing to stop launching while SHU fans were irate that he shot us out of another game.  Every negative has a corresponding positive, as his short-term memory was beneficial that night, going on to sink two CLUTCH 3PT shots in a 9 second span as regulation ended.  As of late, he's been more aggressive in his penetration to the basket drawing fouls when he's not putting up circus shots.  If the Hoyas take away his outside game, look for him to get to the rim, utilizing a Turkoglu-ian verbal flop in an attempt to get to the stripe.  Georgetown will try to slow him down, but won't entirely stop him.  He hasn't been held to single digits in his last 14 games and he won't Thursday, he's just too talented.

More fun with the Hall after 'the Jump':

You have named your blog Gonzo Ball, presumably after the current coach of Seton hall Bobby Gonzalez.  What do you think of the Gonzo era at the Hall thus far?  In addition, what happens to the blog when Gonzalez is inevitably fired or walks in the next couple of years?

What?!? I insist the name derives from the little blue muppet with the long bent nose, I figured I'd have to work basketball into it somehow, so I added, "ball" to Gonzo and here we are.  I kid.  Gonzo Ball is my term for the style of play that Bobby Gonzalez has brought to South Orange.  The tagline for the blog reads:

Gonzo Ball. noun 1. a game played by 13 members of a basketball team, five at a time, sometimes crisp, often sloppy, but always furiously.

It's true, Bobby Gonzalez basketball hasn't always been pretty, but he gets the most out of his kids, that much can't be denied.  If they don't play hard, they won't play, he has no trouble benching anybody on the roster at any given time.  Gonzalez often says, "I don't have to make them happy, they have to make me happy," and it's true.  He doesn't care about their feelings for those 40 minutes on the hardwood, the players who present the best chance of winning the game will see the floor.  Most of the time.

Also, I don't refer to my blog as Gonzo Journalism as it really isn't, however if others do, I'd have no qualms about it.  I'm a big fan of Hunter S. Thompson, the pioneer of, "Gonzo Journalism."  With blogs representing, "new media/journalism" Gonzo Ball represents a neat double-meaning. If Gonzo is fired or walks in the near future, I'll just ride out the latter of the dual-meaning idea, don't tell anybody.

Seton Hall is located in lovely South Orange, NJ,  a scant 14 miles from New York City.  If it’s Saturday night in South Orange and the kids have the urge to party, are they sticking around campus for a frat party/kegger?  Are they hitting up bars in South Orange?  Voyaging to Manhattan?

I'd say close to 70% of the school goes home on the weekends.  However, that other 30 percent? They're down to party.  Thursday's are the best as those who go home on the weekends, stick around one night to get drunk at Cryan's.  When it's closing time, the students find the nearest house or apartment to party at for as long as possible before SOPD shuts it down.  There aren't any frats "on campus" as campus is fenced in and only consists of a few dormitories.  Yes, the entire campus is fenced in, beautiful Newark lurks outside once you take a right out of the main gate. The fence is required.   All the houses and frats are located outside of campus.  In 2007, there was a house on Tichenor Ave., that trudged 2,000 lbs of sand inside in order to host a, "beach party," in the middle of February.  In a snowstorm.  Bikinis and snow.  I lived there.  Charles (landlord), if you're reading this, you're the man.

Do you know or know anyone who knows any of the cast members of ‘Jersey Shore’?  If so, can you share something interesting with our audience that probably cares more about the show than the Hoyas?

Unfortunately I do not, despite going to school with the cast.  Figuratively speaking.  I think. I'm from Connecticut and proud.  But I watch the show and love it, so what's that say for me? How could you not? Beat the ground up! Or is it, beat the beat up? Who knows. MTV please, don't ever can the show. 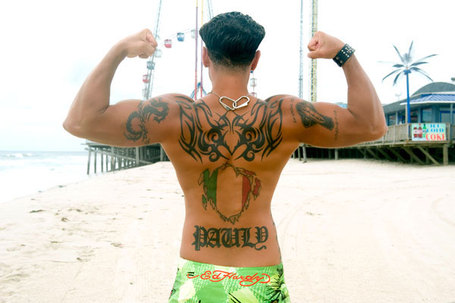 This year’s success has been the result of transfers (Pope and Lawrence) and Hazzell chucking without conscience. Is this a foundation that Gonzo will be able to capitalize on? If not, what would it take for Seton Hall, which has been treated as a career stepping stone to become a destination job?

Lawrence has been non-existent.  Despite receiving three straight starts, he's averaging 4PTs/2REB/STL/BLK, far worse than his previous two years at Mizzou. You'd like to think it's a matter of time before the kid comes around, but he's clearly having trouble adjusting to this team.  Being fair, he plays fine defense, but we're going to need him to actually, you know, produce.  Pope is another story, he's the truth, I mean, he's The Pope of South Orange, after all.  He's leading the Big East in rebounding with 11.5, second place Jamine Peterson is nearly a full board behind with 10.6.  The Pope has 10 double-doubles through 15 games.  As far as a foundation, it will depend on the decisions of Pope and Hazell to stick around or test the draft waters.  Both players will get a look at the next level, however, I'd have to think Pope's future looks the brightest.  If he has a monster Big East season, leaving for the NBA shouldn't be out of the question.

How would you describe P.J Carlesimo’s legend at the Hall?  Where does he rank on a scale of ‘superhuman’ to ‘dude who got choked by Latrell Sprewell’?

You made it easy for me.  I'm going to use 'legend' and 'superhuman' and call it a day.  Seriously.  This is a man that put Seton Hall on the map.  When a college basketball fan hears reference of the Seton Hall Pirates, they'll recognize and respect the name on the jersey because of Carlesimo.  Try to grasp this idea as it's almost surreal.  Carlesimo took a program previously shut out of the NCAA Tournament to the dance for the first time in 1987-88.  He even managed a first round victory over UTEP.  The next year? The NCAA Championship.  They lost in overtime.  By a point. Under Carlesimo, the Pirates made the tournament six times in seven years, including the championship appearance, a sweet sixteen and an elite eight showing.  As far as the Sprewell incident, P.J. reportedly told Latrell, "make your jumpers or I won't feed your family," madness ensued.

It is rumored that Seton Hall fans are solely responsible for concession stands not giving people caps on their water bottles. Care to defend your school?

Are you serious? Or is this a 'punked' situation?  I've never heard of that, but did you know Yankee stadium banned Sunblock to "fight terrorism?"

I had the great fortune of attending Seton Hall’s win over Georgetown last year at the Prudential Center, a glistening new arena in the heart of bustling Newark, NJ.  I must say the in spite of the loss, my experience at the Arena was most excellent, due in large part to the Hoyas Club of Northern NJ that was able to secure a suite for us with free booze and casual veggies and dip.  Do you think the Prudential Center will ever offer the Hall a true home court advantage?
By offering fans of the opposing team free booze, veggies and dip, I don't think they can offer a true home court advantage.  Seriously, what are they giving us? Give us the booze, the visitors can keep the veggies, we'll split the dip and we'll make some more noise!  I'm sure the Hoyas club provided the amenities for you, that was nice of them.  Then again, if we stuff the visiting fans away in a few suites, we wouldn't run the risk of being outnumbered by our oppositions' fans. See the Syracuse game this season, it was pretty close to 50-50.  To try to gain a true home court advantage, we've started curtaining off sections at the Rock for nationally televised contests in an attempt to portray a more legit college atmosphere.  Don't tell anyone.  Just like that second meaning.

Part 2 of Sleeping With the Enemy drops this afternoon at 1pm eastern.