Thankfully for the Hoyas, I also like to live life dangerously.  Away we go... 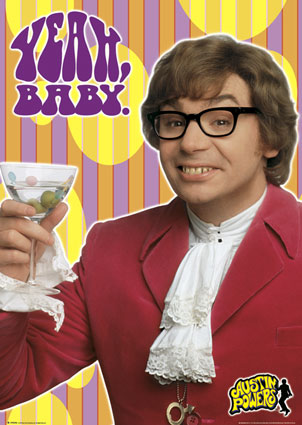 Fan Friendly Award:
Verizon Center ushers and security.  Usually we're all over the Verizon Center for its non-friendly stance on things like capping booze with 15 minutes remaining in the 2nd half, but I witnessed an usher completely shut down a disgruntled Connecticut fan complaining about people standing in front of him after Georgetown took the lead in the second half. The conversation went something similar to this:

Con Fan (to usher): Can you tell them to sit down in front?
Usher: Not really, they can stand if they want to.
Con Fan: I didn't pay to stand all game.
Usher: Then you shouldn't have paid for seats in a Georgetown section.

The E! Network Best Game-Thread Post Award:
This Award, given to the best/most entertaining post during our In-Game Thread, is given to Casual Hoya lover 'James Kannengieser' for this gem:

Yes, perhaps we should be taking it is easy on Roscoe for his decision to attend UConn over Georgetown (after all, he's just a kid), but it was particularly enjoyable to win that game in that fashion just one day after Roscoe announced his dastardly intentions.

World Series of Poker Dumb Move Award:
One more for Roscoe before we move on.  Poker fans know that tipping your hand will only lead to misery.  Roscoe Smith found this out the hard way.  Instead of waiting until, umm,  maybe 3pm on Saturday to announce his decision to attend UConn, Roscoe informed the press on Friday evening and had his tickets to the game taken away by Georgetown.  Looks like Roscoe is going to have a hard time fitting in at UConn where lying, cheating and manipulating the system are all prerequisites for members of the basketball program.

The 6th Man Award:
To Section 102, Row S for not allowing a certain fan to return to his seat after a bathroom break as the Hoyas chipped away at UConn's lead.  The row forced certain fan watch the rest of the game from the concourse.  Awesomely.  I'm all for superstition, which is why I will only be drinking Miller Lites from now on during Hoyas games, as that was the beverage I switched to at halftime.

You're Not Roy Hibbert Award:
Stanley Robinson.  Coming into this game, the 6'9'' Robinson averaged just over 1 three-point attempt per game in his career, yet he remarkably attempted 8 three pointers against Georgetown, in an obvious attempt to try to match the legend of Roy Hibbert.  He failed miserably, connecting only two of those attempts and missing the game tying three at the end of regulation.  Obviously your banishment to the scrap metal yard last year didn't teach you how to take high percentage shots.  Not that I'm complaining or anything.

John Feinstein is a Biased Idiot Award:
John Feinstein.  The day after Georgetown and John Thompson The Third have one of their most impressive home victories to date, you write a column lauding verified cheater Jim Calhoun?  Seriously?  How much more blatant can you be with your lack of respect for the Georgetown program?  You are a disgrace to sports journalism and look like a moron every time you put a pen to the paper.  I would hereby like to begin the official campaign to replace John Feinstein with Barker Davis.  Who's with me?  F-ck the Fat Man on three, 1-2...

Craig Esherick Memorial Award:
Jim Calhoun.  Tremendous in-game adjustments in the 2nd half to make sure a red-hot Freeman kept touching the ball. Classic coaching from the washed-up hothead.  Watch your team blow a huge lead and then call-out the players in the post-game conference? Stay, classy.  Georgetown hasn't had a four game winning streak against the Cons since the early 90's.  Until now.

Tupac Shakur "Keep Ya Head Up" Award:
Henry Sims.  Now that we have a suspicion the team may be reading the Global Phenomenon that is Casual Hoya, we want to tell you to keep your head up big fella.  Your time will come with this team.  Keep cheering loudly, support your teammates, and work hard in practice.  Seriously.  DaShonte Riley withdrew his verbal to Georgetown for a reason -  the writing is on the wall, you're going to have a huge role on this team next year.  I apologize for sounding too 'HoyaTalk.'

Knute Rockne Motivational Speaker Award:
Jeff Green's Dad.  Clearly the Interpret the Tweets lit a fire under Austin Freeman, as he is averaging 27 points per game since their spat.  You keep tweeting, we'll keep making fun of you, and then you keep playing like a First Team All-American, deal? SMH.

Rudy Ruettiger Hard Worker Award:
Hollis Thompson.  Down 53-50, Greg Monroe went to the line for 2 free throws.  After missing the first, only young Hollis was below the basket for the Hoyas.  Somehow, after Monroe's second miss, the 120 lb beanpole grabbed the rebound over four Huskies.  That was pretty cool.

Six Flags Scream Machine Rollercoaster Award:
Chris Wright.  Three wrecking ball drives that got stuffed, and then there was that last 30 seconds of the game.  He almost turned it over two times and was one bounce away from blowing the entire game - UConn had a 3 on 1 if that ball doesn't bounce off Wright's foot directly to Freeman.  HOLD ON TO THE BALL, DAMMIT.  By the end of the year he may cause 5-10 heart attacks for Hoya fans. Cue video montage of Brandon Bowman.

Morgan Freeman Character Award:
The man has played every important character ever, from the President of the US to Nelson Mandela; from God to Principal Joe Clark.  This inaugural award goes to no other than Austin Freeman, who was everything on the court for the Hoyas on Saturday - on the offensive and defensive side.  Well done, Mr. Freeman.  I'll give anyone $50 if Freeman scores more than 25 points in any remaining game this season.

"The Rock" Award:
Jerrelle Benimon.  Benimon is exactly the type of player last year's team lacked.  Hard nosed, angry and intimidating. Jerrelle played 12 minutes off the bench and had four rebounds and one casual People's Elbow to Jerome Dyson's mouth. 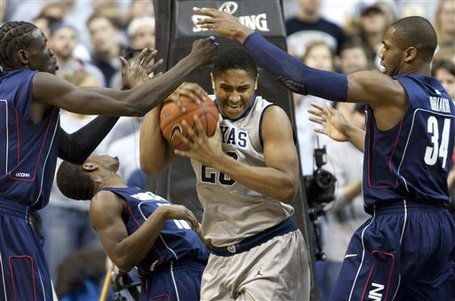 We had no idea what to expect from him coming out of high school, but he has certainly passed expectations.

Nikita Mescheriakov Memorial Stay Hot Award:
Unfathomable that people were actually calling for the departed Belorussian during the first half, though he would have probably made the game more enjoyable.  This dreaded award goes out to Jason Clark, who missed all five of his shots and committed four fouls.   Is it us or has Clark been kind of invisible lately? 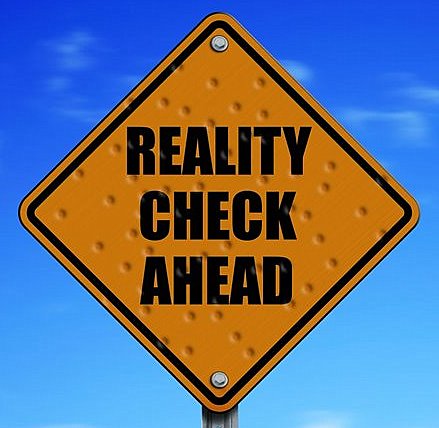 The Hoyas looked awful in the first half, a pretty alarming first 20 minutes considering the team was coming off a tight loss at Marquette and needed this game badly.  Yes, the 2nd half spurt made up for it.  But the Hoyas have some glaring weaknesses, with poor perimeter passing, timid rebounding, an inability to feed Monroe in the post, and lackluster transition defense being key facets of the game that need work as Georgetown enters a brutal 5 game stretch through the end of the month.  The Hoyas got away with it at home versus UConn, but can they do the same at Nova? At Pitt?  Against Duke?  We'll see what happens.

Until then: Gym, Tanning, Laundry.