I am not going to lie, it has been a hard week.  I went to work early and left mid-day.  I avoided eye contact and small talk.  I smiled politely and walked away as others pointed and sneered.  I veered clear of all media and privately reflected and mourned.  I even went so far to tape over my We Are Georgetown shirts, to resemble the below image.  But now it is time to face the music, and acknowledge and publicly share the shame that has oh-so-unexpectedly been cast upon me. 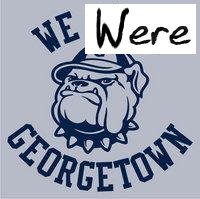 Due to what has been deemed major violations, the NCAA has placed the Georgetown University Athletic Department on probation until September 2012.  The violations stem from a gruesome discovery that Georgetown University itself uncovered and reported to the NCAA in 2007.  Violations so heinous and diabolical in nature that I caution those faint of heart to read any further.  Here goes... 26 players from Georgetown baseball teams spanning 2001-2007 were overpaid by an estimated total of $61,552.   Over seven wretched and corruption-filled seasons, 26 baseball players were each overpaid by an average of $2,366.23.  Kelvin Samson expressed outrage when informed of the news.

As a result, the NCAA has handed down the following penalties, all of which Georgetown will not appeal:

President DeGioia had this to say following the announcement (full version linked here):

In sum, our investigation concluded that over a seven-year period, the Department of Athletics paid an estimated $61,522 in excess work-study compensation to 26 student-athletes in the baseball program. The student-athletes performed real tasks and were paid an appropriate hourly rate, but our investigation revealed that after the baseball field (where most of the tasks were performed) moved off campus at the beginning of the 2000-2001 academic year, the method used for tracking hours worked was ineffective. While this mistake is certainly unacceptable, it is important to note that the investigation concluded that the individuals involved did not intend to cheat or violate NCAA rules and that Georgetown's baseball program did not receive any competitive advantage as a result of these infractions.

All kidding aside, I didn't even know Georgetown had a baseball team.  No wait, that included some form of sarcasm.  All kidding aside, for real this time, this is certainly bad news for Georgetown and its Athletic Department.  It is the first violation in the 139-year history of Georgetown Athletics, a University that prides itself on honor, ethics and compliance.  And even though the violations seem minuscule compared to some of the other nonsense coaches get away with these days, I think punitive punishment was indeed required and am proud of the University for self-imposing many of the penalties.  I am also kind of embarrassed that the University received "public reprimand and censure" for such a pansy infraction.  I liken it to the time I went to prison for peeing in a pool.
President DeGioia was correct to be both disappointed with the findings, and comforted in the process Georgetown underwent to uncover and rectify the situation.  And like he states above, the violations did not put Georgetown in any superior position on the field, which the baseball team certainly could have used considering they posted a 135-246 record over the seven year period.
While I feel that the penalties are warranted, I will withhold judgement on their fairness until the NCAA rules on Connecticut and Nate Miles, USC, Reggie Bush and Tim Floyd, and Duke and Corey Maggette.
Good talk.