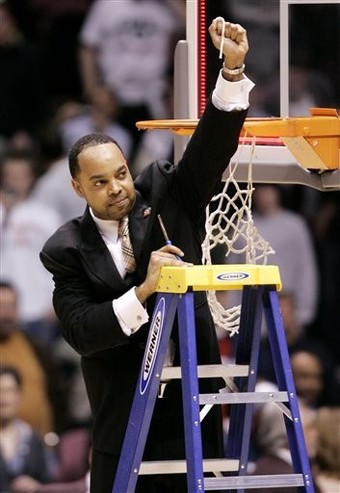 It's been one tough off-season for Georgetown.  First the NCAA comes down hard on the Athletic Department for work-study violations by the baseball team.  Then we have to watch Michael Jordan beat the Hoyas in the 1982 NCAA Championship game over and over again.  Then it rains on Homecoming.  And now this, Binghamton Bears coach and former Hoya Assistant Coach, Kevin Broadus, comes under fire as five players are dismissed from his team for bad behavior.  This comes a day after Broadus threw another player off the team for being caught with cocaine.

Broadus is taking a beating in the media, and rightfully so.  He recruited problem players to take him to the NCAA Tournament, but couldn't straighten out their problems.  But as Gary Parrish points out, some blame needs to go to the Binghampton Athletic Department and President. Everyone knew Broadus was a risky hire, given his past affiliations with Lutheran Christian Academy, a Philadelphia Prep School.  Every Georgetown fan knew this after a scathing article in the New York Times in 2007, discussing the fact that former Broadus recruit Marc Egerson failed 12 high school courses.  Remember this haunting quote?

"Thompson and Broadus recruited a player to Georgetown who in four years of public high school in Delaware compiled final grades of F in 12 courses.  That player was Marc Egerson, who had a grade-point average of 1.33 in core courses like math, science and English. He passed nine such courses without receiving a grade higher than a C. As a freshman, he even failed physical education."

Lutheran Christian was questioned in the media as far back at 2006.  So I pose the question - is taking on risky players worth the risk?  It can go one of two ways, the player succeeds on and off the court, graduates in four years, and goes on to live a successful life thanks to the opportunity he was granted.  Or, the player fails miserably, gets in trouble, brings negative attention to the coach, program, and school, and gets people fired.  Seems like an easy choice.  When a player succeeds, no one notices or cares.  Even the sappy CBS shorts during the NCAA Tournament do not cover these stories, as they are too busy discussing the speedo-wearing Dukie.  But if something goes wrong, and that risk blows up, all hell breaks loose.

John Thompson Jr. was known for taking these risks, and more often than not, they paid off.  But when one did not work out, he was panned in the media.  People love to talk about Michael Graham but never mention Billy Lynn, a player that went above and beyond in the classroom despite mediocre high school grades.  They talk about Allen Iverson but rarely the impact Thompson had on Alonzo Mourning, redirecting his life away from drug lords and crime.  By no way am I condoning what Broadus did at Binghamton, he made his bed, and now he has to lie in it.  But I just do not see the point in recruiting players with questionable high school histories to a program.  Sure it is noble to turn around a young man's life but is it worth the reputations of a school and coach if it blows up?  Unless you are John Calipari or Coach K, and have the NCAA in your pocket - it doesn't seem worth it.