Hump Day: What We Have Seen So Far in Kenner, Tulane Game Update

Share All sharing options for: Hump Day: What We Have Seen So Far in Kenner, Tulane Game Update

Nearly one week into Kenner League action, and here is what we know: 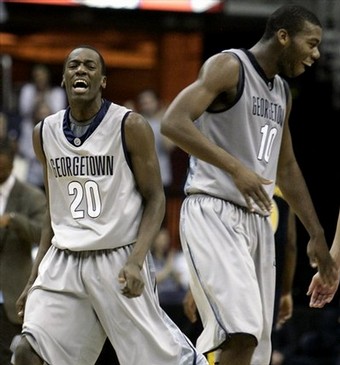 Greg Monroe - appears physically to be the same player as last season, for better or worse.  Our spies tell us he has yet to show an improved ability to finish with his right hand, though hopefully he'll unleash it in the upcoming weeks.

Hank Sims - Feel free to call him Henry if you'd like, but I like the sound of Hank.  Sims has been somewhat of an enigma this week, alternating games of modest production with 30 and 10 outings.  The reality is that Hank was better as a freshman than Roy Hibbert was, and if he can make a significant leap this season to complement Monroe underneath the basket, the Hoyas should be in good shape.

Chris Wright - after his first full season at the point, CW looks ready to be the team's leader.  He has clearly spent some time in the weight room in the offseason, and has been attacking the rim in Kenner.

Austin Freeman - looks to have shed about 10 lbs., and I like that he's playing on The Tombs with a bunch of freshman, since it has allowed him to take a bunch of shots and be aggressive.  I still think Austin has one of the sweetest strokes in the Conference, and he's only going to be more effective on the court if he is confident enough to let it fly.

Hollis Thompson - It's Christmas Time in Hollis, Queens!  Big expectations for Hollis this season, who needs to be a lean, mean, Princeton offense guru machine.  Like Patrick Ewing Jr, Hollis had nearly a full season to grasp the offense in practice.  Has displayed good athleticism and a nice stroke from outside in Kenner play thus far.

Jason Clark - By all accounts the most improved player on the Hoyas.  Mr. Wingspan has improved his handle in the offseason, and has been hitting shots from outside and underneath thus far, including some ferocious dunks.  Would the Hoyas be more dangerous with Clark starting at the 2 and Freeman coming off the bench?  I guess that's a question for JT3.

Julian Vaughn - Can Julian be Jerome Williams?  That's really all we'll asking for.  Julian has been fairly impressive so far, grabbing boards and also exhibiting decent touch from outside.

Jerelle Benimon, Vee Sanford - these two freshmen haven't showed much (Austin's been doing much of the shooting on The Tombs), but since JT3 will likely only ask them to play about 5 mins a game this season, that's just fine.  As long as these guys don't dribble the ball off their knees out of bounds, I probably won't have much reason to throw them under the bus.

With Tulane accepting an invitation to play in the 2009 Charleston Classic November 19th-22nd, it appears increasingly likely that the Hoyas will be making the trip to the Big Easy to play the Green Wave the weekend of Friday, November 13th.