Share All sharing options for: Georgetown Hoyas to win Big East, Greg Monroe to win Player of the Year

ESPN.com's Andy Katz lists Greg Monroe as a legitimate candidate for national player of the year:

7. Greg Monroe, Georgetown -- Monroe is arguably the top big man in the country on a team that could be a surprising Big East title champ.

Top big man in the country!

A team that could be a surprising Big East title champ! 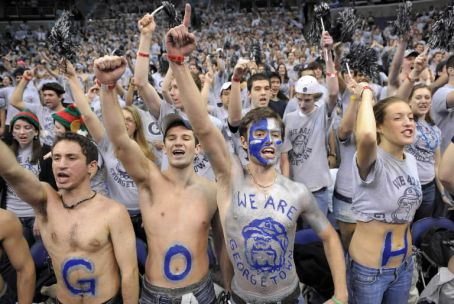 Wow. Did Katz really write that or did our friends at HoyaTalk put that together?

In other news, according to dictionary.com:

Since this site was based on the fundamental tenets of pragmatism, realism, cynicism, and truth, we'll let the Hoyas' play on the court speak for itself rather than get swept away by waves of hyperbole a full two months before Midnight Madness.

Then again, even the Scrooge in me will admit that it doesn't hurt to dream.

See you in Indianapolis.