What do you get when you combine boredom, the August work lull, a challenge from a reader and an awesome TV show? The answer is obvious: an incredibly random, absurd and amusing to some but pointless to others blog entry.

After a recent trip to Los Angeles and Vegas, I was challenged to somehow compare the two celebrities / athletes I had the pleasure of meeting / stalking from a distance: Fabio and Hasheem Thabeet.  First off, I challenge you to name a better celebrity to see in Los Angeles than Fabio.  An informal poll at an airport bar proved this point, as two participants originally responded Brad Pitt and one awkwardly contended Richard Simmons but then agreed that Fabio trumps all.

In response to above mentioned challenge, I present: Deadliest Warrior - Hasheem Thabeet vs. Fabio.

For those who have never seen the show, it basically matches two characters or groups against each other in battle and then hypothesizes which would be victorious based on a defined criteria and analysis of weapons and battle tactics employed.  Or simply put, it is visual awesomeness, more sweet than drunk lax bros wearing backwards AND upside-down visors.

First, a look at the warriors. 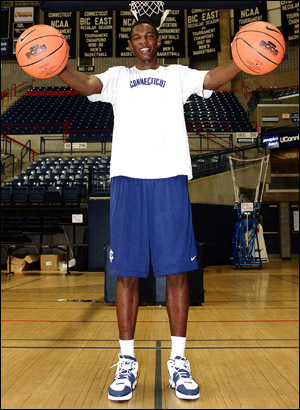 Tall and mysterious, Hasheem dominated the paint for the UConn Huskies for three years before being selected by the Memphis Grizzlies with the second overall pick in the 2009 NBA Draft.  He hails from Tanzania and was named Co-Big East Player of the Year in 2009. 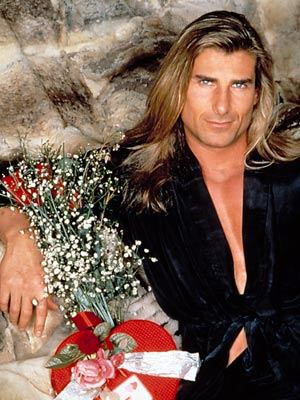 If you look up the definition of hunk in the dictionary, you will probably see my picture.  But below my picture, it might mention Fabio.  Fabio, a man who's fame allows him to be referred to by only one name, is a fashion model who entered the national spotlight by posing for romance novel covers and promoting butter spreads.

The warriors will be judged in three categories: (1) Hand-to-Hand Combat, (2) Communication and (3) Special Skills & Weapons.

The sign of a great warrior is the ability to defend himself without the use of machines or weapons.  The match-up between Hasheem and Fabio poses an interesting question: which is more important, size or strength?

Hasheem: At 7'3'', Hasheem Thabeet is a giant among boys with a gargantuan 7'6'' wingspan and 6.7% body fat.  An extreme physical specimen, Hasheem has been put through the toughest and most grueling conditions and emerged intact.  His main weakness stems from a common trait among UConn players, tendencies to be lil' b*tches.  Evidence of such can be found in the below video, where a much smaller DeJuan Blair flips the towering Thabeet over his shoulder with a simple nonchalant tug of an arm.

Fabio: With a chiseled chest, rock hard abs and flowing and golden locks of serenity, Fabio seems better suited for a catwalk than the merciless and vicious grounds of battle.  But don't be fooled by the movie-star looks, Fabio is a warrior.  Take the below video as evidence, the man took a goose to the face during a roller-coaster ride and walked away to tell his story.  Never forget: The man who fears nothing is as powerful as he who is feared by everybody.

Result: Hasheem comes out attacking but tires after five minutes of intense physical battle.  As per the usual, Hasheem looks to others for help, either to his ethically-deviant coach to yell at the refs and then over-hype his abilities in post-game tirades, or to teammates to take on the burden of man-to-man defense while he relaxes in the paint and swats an occasional shot.  Unfortunately, this is hand-to-hand combat and Thabeet does not have the luxuries he was afforded at UConn that allowed him to swindle a co-Big East Player of the Year title.  Fabio observes patiently as his opponent weakens and finishes Thabeet with a swift head-butt.  Winner: Fabio

Communication is key in battle.  It is as important for your fellow warriors to understand your instructions as it is for your opponents to not.  This category looks at the communication skills of both warriors.

Hasheem: With a deep and booming voice, Hasheem is able to communicate across great distances with a simple yelp.  Difficult to duplicate and reminiscent of the baritone pipes of warrior-elite Dikembe Mutumbo, Hasheem's commands are often only decoded by close caption experts.

Fabio: Although of Italian descent, Fabio has an incredibly monotonous and generic European accent which makes it impossible to disguise communication from opponents.  Due to this deficiency, Fabio found work posing for novel covers, where a simple flash of the pearly whites was sufficient to draw readers to the trashy novels.  But the battlefield is no novel cover, and Fabio is unable to covertly command his troops.  His speak is eerily similar to Arnold Schwarzenegger's in Kindergarten Cop - a favorite of all warriors.

Result: With the ability to disguise his commands and transmit them over long distances, Hasheem is clearly superior to Fabio.  Winner: Hasheem

Every warrior has a special skill or weapon, and it is often used only during the most extreme circumstances, when the difference between life and death is less than a breath.

Hasheem: As would be expected of any player trained by Saint Calhoun, Hasheem specializes in stretching the boundaries of acceptable play.  His go-to defensive move is to roll over and play dead, often utilized during the end of close games.  The tactic involves Hasheem faking an injury when fouled so Calhoun can replace the big man, who is a horrific from the free throw line, with a guard who excels from the line.  The tactic proved so beneficial that the NCAA banned its use for the upcoming season.

Fabio: Through a lucrative contract with I Can't Believe It's Not Butter, Fabio has a lifetime supply of the butter-like spray.  This slippery and transparent film proves remarkably valuable in battle as it serves as an oil slick to disrupt transport, a lubricant to aid man-to-man battle and a blinding mace to strip opponents of vision.

Result: Despite the obvious advantage of the butter spray, it cannot help Fabio when Hasheem acts like a wuss and plays dead.  The incredibly pathetic tactic employed by Hasheem proves more valuable as it gives an opponent a false sense of confidence during battle when the big man lays down to fake injury.  Winner: Hasheem

With a 2-1 advantage, Hasheem Thabeet out-duels Fabio in the first ever Deadliest Warrior battle between the Big East Elite and the Hollywood Hunks.  On a side note, if you have made it this far in reading this crap, you lost as well.