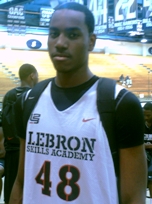 When asked about the choices, Amira Hamid, Christmas' aunt and legal guardian, stated:

"It's been a process, one that we wanted to make sure that the best choices were made for Rakeem. He has been receiving scholarship offers since the 8th grade. With such an overwhelming number of schools interested in him, it was important that we did our due diligence with finalizing this list."

With regards to his recruitment, Rakeem stated:

"I appreciate the interest that many coaches have in me but these are the schools that my family and I think would be a good fit for me.  My family and I are thankful to everyone that has offered me a scholarship and participated in my recruiting.  I'm looking forward to my season at ANC and playing for Coach Givens.  I've played with some of the players during the summer and I had a good time.  After summer is over I want to make sure that I do well and improve in class and on the court."

Rakeem is a top prosect from the Class of 2011 and Scout ranks him as the #1 center in the country.  ESPN labeled him the standout player from Day 3 of the LeBron James Skills Academy.