The Wait is Over: Hoyas in Action as Kenner League Begins

Share All sharing options for: The Wait is Over: Hoyas in Action as Kenner League Begins 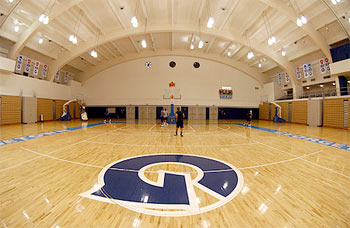 The Kenner League allows us to kick the Hoyas Hype Machine into overdrive.  It comes at a perfect time in July when there is really nothing else going on in the worlds of sports, when Brett Favre dominates the headlines, people pretend to care what trades the Phillies are making at the deadline, the Knicks are still horrible, Sal Masekela is bringing you X Games updates from the Staples Center, and Michael Jackson is still dead.

Casual Hoya will be bringing you coverage of the action throughout the weekend, so be sure to check back to see what's going down.

But most importantly, the opener of the Kenner League signifies the moment when we can finally begin to use the basketball being played on the court at McDonough to help erase the memories of the basketball that was played last year.

For those unfamiliar with the Kenner League, here's a nifty summary from our friends at guhoyas.com, and here's the schedule.  Though the rosters won't be announced before the actual games, we hear that Austin Freeman and the freshmen will be playing for The Tombs, Chris Wright and Greg Monroe on DCX, Jason Clark and Henry Sims on Clydes, and Hollis Thompson on the Madness All-Stars.

Consider yourself warned, however, because the aforementioned Hoyas Hype Machine will be out in full-force. At this time last year Henry Sims was lethal from behind the arc and better than Greg Monroe.  Chris Wright was scoring at will and making good decisions.  Omar Wattad was in blue and gray.

But no matter what happens over the course of the next two weeks, just be thankful that Stephon Marbury did not go to Georgetown:

And if that didn't work, there's always the T.O Show or Miami Social.  That Lina sure is a firecracker.