Last month, GrittyCrusader presented a great analysis of why last season was such a disappointment.  Following in his footsteps, below is another reason why things went horribly wrong.

There are two keys to running the Princeton offense.  (1) Protecting the ball and (2) taking high percentage shots.  Both are essential to winning since the offense is based on clock management and low scoring games.  The two best layman metrics (i.e. not involving the wizardry the fellows over at Hoya Prospectus perform) to judge how well the team is running the offense are (1) Assist to Turnover ratio and (2) Assist to Field Goal ratio.  The former measures the number of turnovers for every one assist and the latter measures the percentage of field goals created by assists.

Following the jump are the Assist to Turnover and Assist to Field Goal ratios of Georgetown over the past five seasons.

But first, some definitions:

Starters - The five players that started the majority of the games in any given season.  So no, Nikita is not, will not, and shall not ever be considered a starter.

Positions - As listed in each year's respective media guide.

Team - For the first time ever under JT3, the Georgetown squad had more turnovers than assists. 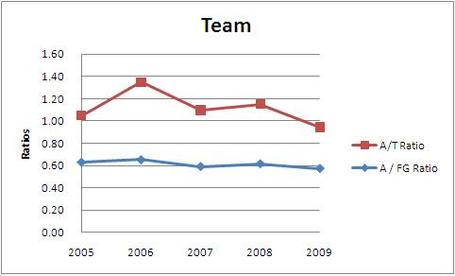 The 2009 squad had numbers that resembled the 2005 team, which happened to be the only other time under Thompson the Third that Georgetown failed to make the NCAA Tournament.  Both teams were similar in their makeups, very young and fresh to the Princeton offense.  Alternatively, 2005 was the only time JT3 did not have any of his own recruits (minus walk-on Wallace). For the first time, everyone on the 2009 team was recruited by JT3.

Starting Five - The 2009 starting five had the least amount of assists and lowest A/T ratio out of any other starting five. 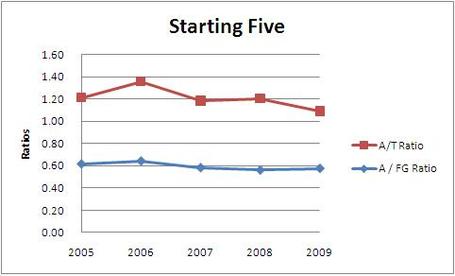 One possible explanation to this drop productivity could be because the starting five of the 2009 team played more minutes per game, or a greater percentage of the team's minutes, therefore spent more time on the court during junk time.  This is actually not the case, the starting five of the 2009 team played less than the average over the past five seasons.  The drop could be explained by new guards running the system, even though Sapp was a senior but...

Starting Guards - The A/T ratio of the 2009 starting guards actually improved from 2008. 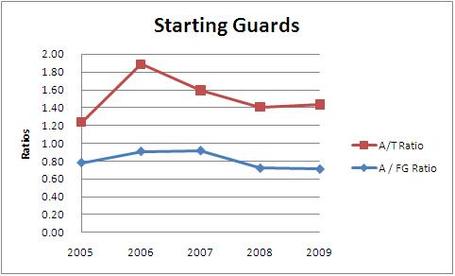 But the A / FG ratio was the lowest it has ever been. The 2009 guards played a substantially larger scoring role in the offense, which led to more field goals and fewer assists.  The 2008 and 2009 Georgetown teams averaged the more points per game than any other team, and both have the lowest A / FG ratios for the starting guards. 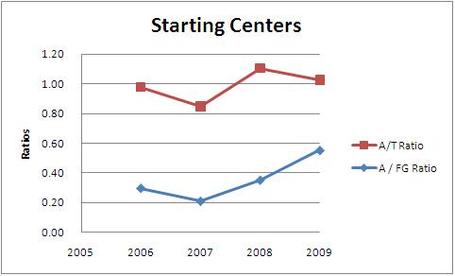 But he was also forced to play a bigger role because of...

Starting Forwards - Summers, love him or hate him, was a drag on the offense. 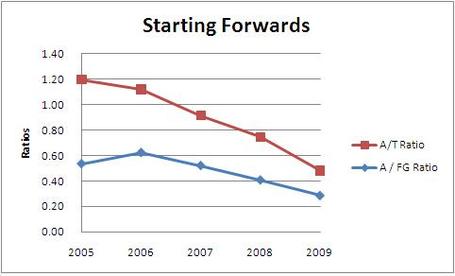 The only player EVER under JT3 to average twice as many turnovers than assists in a season (and average more than 6 minutes a game).

Da Bench - The bench was horrible. 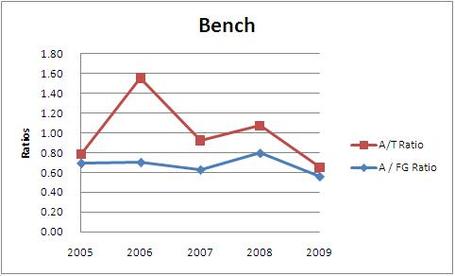 The bench was also incredibly inexperienced.  The only players on the bench that had ever played in this offense were Omar Wattad and Bryon Jansen.  And both combined to average less than 5 minutes of playing time a game coming into the season.

It is easy to look at the graphs and point to certain factors (or persons or Summers) that led to the demise of what looked to be a promising season.  But in the end, you cannot overlook the fact that Georgetown fielded a very young and inexperienced team in a brutal and grueling league that arguably could have been one of the deepest, strongest, most experienced and most talented conferences ever.   That being said, the future looks bright...