Today seems like a great opportunity to catch up with one of my all-time-favorite white-people who have (recently) played Georgetown basketball: Brendan "Rudy" Gaughan.* Surely many of you remember the glorious years in the 1990's and in particular that magical season of 1995-1996 when the potent combo of Allen Iverson and Gaughan took our Hoyas to the Elite 8. How does someone build on that legacy? By going pro, of course. 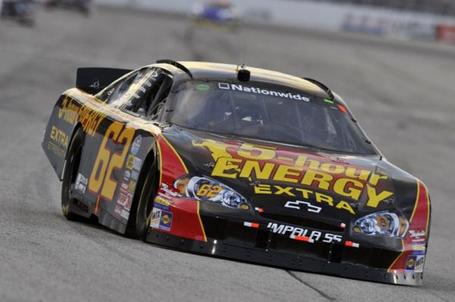 You thought he was still playing basketball? Not even close. Can I recount his career on the racetrack here? No there simply isn't enough room. And I don't have the slightest idea how to explain Craftsman Tuck Series results. Instead, here's a nice round of applause for the #62 5-Hour Energy Extra Strength Toyota that came in 13th last night at the NorthernTool.com 250 in Milwaukee. Not bad for, uh, starting in 3rd.

I would be remiss at this moment if I didn't mention a little dust-up earlier this month between Gaughan's crew-chief and a black driver that apparently involved "an inappropriate comment that won't be tolerated." Oof.

So why don't we take this opportunity for some racial-harmony polling: vote for your favorite white Georgetown player!

(*Although Brendan is one of my favorites recently, my all-time favorite is a tie between Paul Tagliabue and Henry Hyde, the latter having led Georgetown to the 1943 Final Four).