Who was the only Division 1 basketball player to average over 10 points, 10 rebounds and 2.5 assists per game during the 2008-09 season? 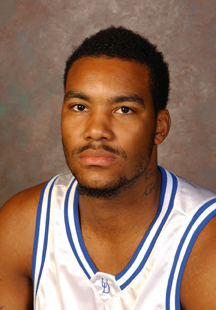 That's right sports nuts, it was no other than former Hoya Marc Egerson.  WBOC-TB 16 reports:

A two-year standout for the Hens under head coach Monté Ross, Egerson, was named to the NABC Division I All-District 10 and All-Colonial Athletic Association first team in 2008-09 after earning a spot in the All-CAA third team as a junior in 2007-08. This past season, he started all 32 games while leading the Blue Hens with 15.4 points and a CAA-leading 10.3 rebounds per game (No. 15 in NCAA). One of only 17 players in Division I to average a double-double, he also led the conference with 14 double-doubles, 8.6 defensive rebounds per game and 36.4 minutes played per game. He was the only Division I player in the country this past season to average over 10.0 points, 10.0 rebounds, and 2.5 assists per game. He is a black American studies major at Delaware.

Quite an amazing feat considering that Egerson once failed physical education.