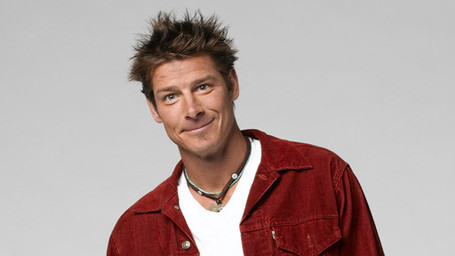 In a television appearance that could in no way whatsoever be a clever commentary on what the Hoyas need this offseason, Roy Hibbert made a brief and unheralded appearance on ABC's "Extreme Makeover: Home Edition" this evening.

Let me first explain that I caught this COMPLETELY by happenstance, between viewings of Jim Nantz calling the playoff hole of the Valero Texas Open in San Antonio and watching the Weather Channel to see when I'm going to start to sweat again on the bus ride to work (answer: probably Wednesday).

Anyways, the Home Makeover crew was in Indianapolis and apparently one of the adopted/amputee/Iraq-war veteran/genetic-disorder/childhood-diabetic/lactose-intolerant kids of the family was a huge Pacers fan (probably another disability, actually).  And so one of the designers spent an afternoon with the team.

The two things I explicitly remember #55 doing: swatting a layup by the ABC guy into the gym's rafters with the same kind of defense that stymied Aaron Gray; and, during a comedic ending to the segment, throwing a bunch of towels on the ABC guy and shouting "clean it up rook!"

ABC has posted no video of this yet.  But I pledge to the readers of this blog to spare no effort in bringing this magical television moment to the Hoya faithful.