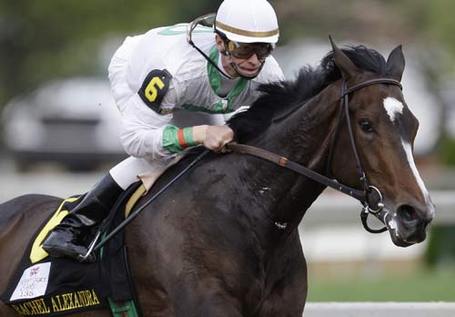 With nothing going down in HoyaLand, it's time to tackle the only relevant sporting event in the DC area this weekend - the 134th Preakness Stakes.  As such, please enjoy our inaugural Preakness Stakes Analysis.

With a field of 13 3-year olds set to run for the Black-Eyed Susans, much of the pre-race discussion has revolved around the inclusion of the intriguing filly (female) in the race, Rachel Alexandra.  Rachel won the Kentucky Oaks in much ballyhooed fashion by seemingly galloping to a 20+ length victory at 1-5 odds (watch the race here).  Rachel has since been promptly sold to a new owner for a massive undisclosed sum, trained the past two weeks by a new trainer, and is now being asked run for the first time against horses with male sexual organs.  That seems to be asking a lot from a horse, especially one coming off a 2-week layoff that hasn't run on less than a 5-week layoff in her life.  Rachel currently sits at 9-5 odds, which means that she's simply not a good value bet if you're trying to make some cash to pay for your Hoyas season tickets.  That being said, it's tough to discount her freakish running ability, so I'm going to use her in my trifecta box.

Horseplaying is about demanding value, and I see the most value in this race on the Derby fave, Friesen Fire.  Friesen was at 4-1 odds in the Derby, and after a miserable trip that landed him 18th (out of 19), he's currently sitting at 10-1 for the Preakness.  Friesen has seemingly rebounded physically from some cuts he suffered in the Derby, and has been training briskly at Pimlico. I think that in this less crowded field, he should get a better trip and we'll see what he can do down the stretch.  I haven't lost faith in Friesen yet (though I have lost a bunch of money on him) and will be using him in the Preakness.

Filling out my wager will be two from the next tier of horses that are both accomplished and provide good prices.  Big Drama (10-1) has won his last 6 starts and will likely be one of the frontrunners as the horses enter the stretch.  Papa Clem (8-1) always seems to be in the mix, and could have claimed 2nd in the Derby but for a controversial bump from Pioneerof the Nile in the stretch run.  Pioneer, by the way, is one of the more accomplished horses in the field and finished 2nd in the Derby, but I just don't like him.  I think he would have finished 4th or 5th (or DQ'd) in the Derby if an inquiry from Papa Clem's or Musket Man's connections was raised due to that bump in the stretch, and he hasn't improved his Beyer speed figures at all in his past 4 races.  If he beats me, he beats me.

Rounding out the trifecta wager will be Terrain (30-1), who I think has the best chance out of the longer shots of hitting the board.  General Quarters (20-1) also a decent play here, but I'll roll the dice on the 30-1 shot with some talent (rallied from 8th to finish 3rd to Friesen and Papa Clem in the Louisiana Derby) and hope he shows.

I am recommending a $1 trifecta box on the #1 (Big Drama), #5 (Friesen Fire), #6 (Terrain), #7 (Papa Clem), and #13 (Rachel Alexandra).   This wager will cost you 60 hibberts.  Note that I am completely tossing the Derby winner Mine That Bird, because I think that race was a complete sh-tshow and fluke.  Of course, I could be wrong, in which case you just wasted about 3 minutes of your life.

NOTE: I woke up early Saturday morning in a cold sweat after a dream in which Pioneerof the Nile was kicking me in the head while Bob Baffert was laughing in the background.  He may be worth throwing some hibberts on to Place or using in that 5-horse tri over someone like Papa Clem. If Pioneer goes off as a 5-1, that's not a bad price for a horse of his class.