Share All sharing options for: Greg Monroe to Stay? 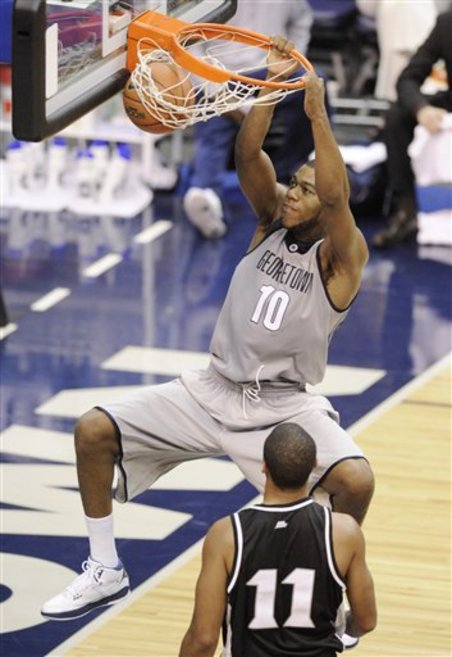 From Andy Katz column on who's declaring for NBA Draft:

Georgetown coach John Thompson III didn't have a final answer regarding freshman Greg Monroe's draft status. But the impression left by Monroe and his family is that he's considering returning for a sophomore season. Monroe started out strong early in the season, but then faded as a major impact player who could leave and contribute next season in the NBA. The example that is being used with Monroe, and it's a good one, is Oklahoma sophomore Blake Griffin. Monroe isn't Griffin. He's not as strong or powerful a force inside. But Griffin was nowhere near ready to come in and play in the NBA after his freshman season. If Monroe returns and works on his strength and overall offensive package, then he has a real shot to be a player once he enters the NBA, instead of just a work in progress.

Meanwhile, I didn't get the sense the Hoyas were too worried that junior DaJuan Summers declared for the draft. Assuming Monroe returns, Georgetown is pretty confident it'll shake the late-season swoon and become a contender in the Big East next season. Thompson III is high on a potential starting lineup of Monroe, rising sophomore big man Henry Sims, freshman Hollis Thompson (who sat out the spring semester after graduating early from high school) and rising junior guards Chris Wright and Austin Freeman. The experiment with Thompson worked out perfectly according to JT3, who said having Thompson learn the system early will speed up his ability to contribute next season.