25 years ago today, the Georgetown Hoyas defeated the Houston Cougars to win their first national championship in school history.  The game featured a match-up of two 7-foot, all-American centers, Patrick Ewing of the Hoyas and Akeem Olajuwon of the Cougars.  Despite the star power in the front court, both teams were led by underclassmen guards.  Sophomore Alvin Franklin led the Cougars with 21 points while freshman Reggie Williams led the Hoyas with 19 points, 13 of which came in the second half.  Olajuwon and Ewing led their teams with 9 rebounds each.  Patrick Ewing was named MVP of the Final Four, to go along with his Big East Player of the Year award. 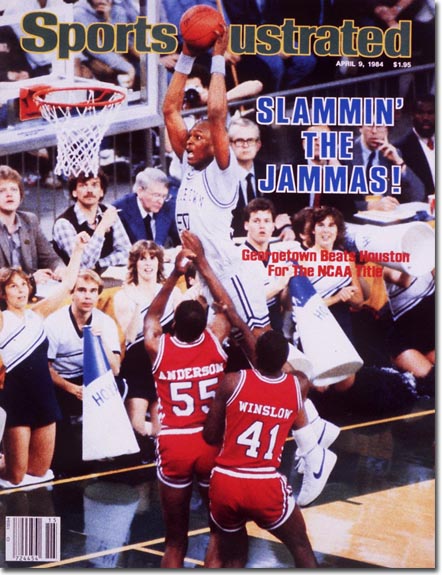 After the Houston game, one of my players came over and said, 'Coach, you finally got that last one.'  Now I have the period that ends all sentences: 'I won the NCAA.'

Lot more coverage of the game and people's memories at HoyaSaxa.com.