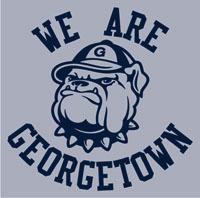 Call me crazy, but I still think Georgetown has a chance to make the Dance without winning the BET.

As I type this, the anger from the St. John's loss still bursts at my fingertips, but the Hoyas have been a bit fortunate in the sense that most of the other so-called Bubble Teams around the country haven't done anything in the past week to solidify a Dance nod. In fact, many have taken a step back.

For purposes of the Big East, we know that 1) UConn, 2) Pitt, 3) Louisville, 4) Villanova, 5) Marquette, 6) Cuse and then it's really up for grabs between Cincy and Providence for the 7th slot. Cincy stumbled badly against South Florida, but should take care of business against Seton Hall at home on Saturday, and if the current BET brackets hold, would likely set up a 'win and in' game against Providence in the quarterfinals. I don't think the loser of a potential Cincy-Providence game gets in under any circumstances.

NOW, assuming the Hoyas beat DePaul, and then beat some sort of St. John's/USF team in round 1, they will face a team like Marquette (hasn't won a game since Dominic James went down) or 'Cuse (have beaten them before) on Wednesday.  A win on Wednesday means yet another win over a ranked team, and would get the Hoyas to 18 wins. Given the bad losses thus far I don't think that 18th win will be enough, but the 19th win would most certainly open up an 8th slot for a Big East team in the Dance, especially since win #19 will come against a top 10 team. That win will make Georgetown the only team in the nation to have beaten 4 top 10 teams this season (UConn will be the 1st if they beat Pitt this weekend), bump our RPI into the top 35, and the SOS will be top 3 if not higher.

So there it is. A trip to the Big East semifinals will mean the Hoyas will be Dancing on March 15th. Is this realistic given the Georgetown will need to run off 4 wins in a row hasn't won consecutive games in 2 months? Of course not.

But hope survives until it no longer exists, and hope is casual.