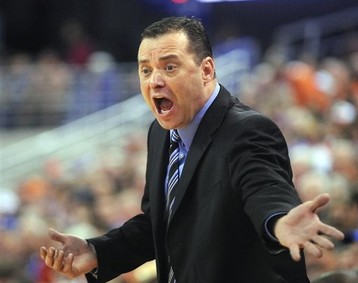 Billy Gillispie has been fired from the head spot of Kentucky after two years at the helm.  This year the talented Wildcats squad failed to make the NCAA Tournament for the first time in 18 years.  Because of Billy, we were all deprived of seeing their #1 fan, Ashley Judd, jumping around in the stands during March Madness.  Shame on you Billy.  Shame on you.

So what does this mean for Georgetown?  Here is a list of reasons why it matters.

- Both the Wildcats and Hoyas are currently recruiting Vee Sanford, a point guard out of Lexington, KY.  Assuming Kentucky scrubs the basketball office clean, I don't see Sanford committing to a program with a new coaching staff that did not recruit him.

- When searching for a replacement coach for Tubby Smith two years ago, Kentucky reached out to Jay Wright of Villanova.  Wright eventually declined the offer, citing that the great city of Lexington, Kentucky would not be able nourish the beauty, glow and aura of Wright's perfectly groomed hair.  Also, Lexington does not have a 24-hour convenience store should Wright ever have a hair gel emergency.  Also, the Men's Warehouse of Lexington does not sell Armani suits.  Also, the nightclubs in Lexington don't announce last call by playing "It's Raining Men," which happens to be Wright's favorite song.  I can keep going, I really can.

- While Kentucky would probably not approach another Big East head coach, it could lead to a major coaching carousel.

- They could go after John Calipari of Memphis.  Memphis currently has the #1 recruiting class in the country.  If Calipari leaves, all five players can re-open their recruitment.  Georgetown does not have a shot at any of those players, although other Big East schools like UConn and Pitt did go after a couple of those recruits.  Replacements for Calipari are endless, since he really doesn't actually do anything.  All he does is secure jobs at FedEx for family members of recruits and teach the highly touted high school stars how to miss critical free throws at the end of important games.

- They could go after Billy Donovan, which would open up the Florida spot.  When Donovan announced he was leaving to coach the Orlando Magic, the Gators filled the head coaching spot with VCU head coach Anthony Grant.  Donovan eventually came back to Florida and Grant returned to VCU.  If Donovan actually leaves this time, Florida would likely do the same thing again, which would screw over Alabama since they are currently trying to lock Grant into a contract.  And then Alabama and VCU wouldn't have head coaches.  Egads!

So in the end, the only real effect the firing of Billy Gillispie has on Georgetown is that it improves our chances with Vee Sanford and gives me an opportunity to make fun of Jay Wright.  So it is a win-win situation for the Hoyas.