What is a Yute?

Share All sharing options for: What is a Yute?

After Louisville embarrassed Georgetown at the Verizon Center by 18 points in late February, handing the Hoyas their ninth loss in eleven games, Rick Pitino had this to say:

"Outside of the Fab Five, I haven't seen too great teams with freshmen and sophomores.  They're young, and young teams don't win consistently in the Big East."

The quote got me to thinking about young teams and their performance.  I took a look at past National Champions and calculated the experience of their rosters.  I took a look at past Big East Tournament Champions and measured their maturities.  The results pointed to a simple truth.  The 2008-09 Georgetown team is very young compared to past champions.
So despite the major hype after the Memphis and UConn wins, Georgetown never really had a shot at a championship.  But what about mediocrity?  For the next part, I took a look at other teams and how they fared when their roster was comprised of mainly underclassmen and how consistent they have been over the past five years.  The result was the same, very few of the current top teams have been consistently good.

Now it is time to look at the top teams in the NCAA Tournament, the ensemble known as the Sweet Sixteen, and measure the experience of their rosters.

But first, people had emailed me other requests but I never really responded.  So I guess this is as good of a time as ever to respond to them.  As a reminder, below are the definitions of how I defined the players and their maturity:

Starting Team - players ranked in the top five in minutes per game for the season
Bench - players not included in the starting team that average ten or more minutes per game
Contributor - player that averages 10 or more minutes a game
Experience - 3 years for seniors, 2 years for juniors, 1 year for sophomores and 0 years for freshman
Age Classification - as listed on roster, regardless of injury, transfer or red-shirt status
(Note: Not the same as Pomeroy calculations)

Here is the experience of teams in the Big East:

Georgetown is 14th in the league, but they have lost four games to the only two teams with less experience than them.  And Notre Dame is the most experienced and we all know how far that got them this year.

Here is the experience of the past four NIT Champions: 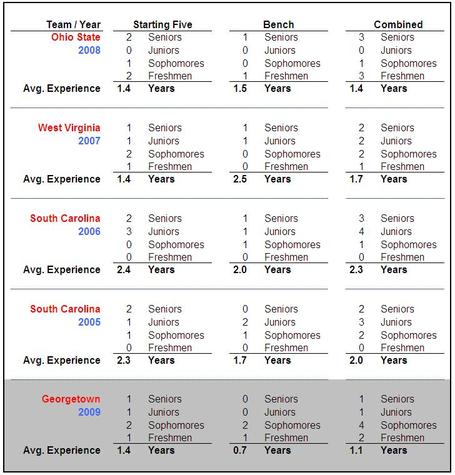 While the starting lineup of Georgetown is on par with other NIT Champs (this assumes Jesse is a starter since he averaged more minutes than Nikita), the bench is far less mature.  Also, the 2008 Ohio State team had three returning players from the 2007 Final Four team.

And finally, here is the experience of teams in the Sweet Sixteen: 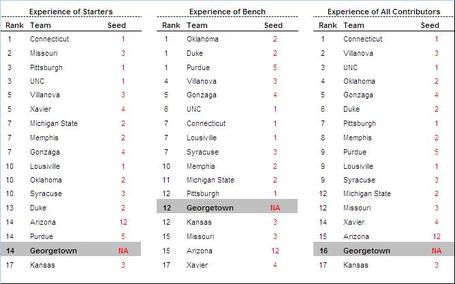 Except for Kansas, which returned 3 players from a team that won the National Championship in 2008, and Arizona, a surprise team this year, Georgetown has significantly less experience than any of the other Sweet Sixteen teams.

Not trying to offer an excuse, just trying to add some rationale for our dismal performance this year.

Next year is the defining year for JT3's legacy at Georgetown.  How will the team perform now that the young players have experienced a year of playing in the best, toughest and deepest conference ever.