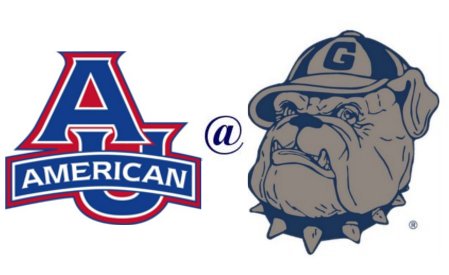 Look, I know as a student I'm supposed to make the voyage from Georgetown to Verizon to support the team. I was happy to watch the team trounce the woeful Lafayette Leopards and Mount Saint Mary's Mountaineers. But am i really expected to show up at Verizon to see them destroy American when it's supposed to be snowing? Can't I just nurse my hangover in peace and relax in Harbin? By the way, tremendous rager in Henle last night. Trust me when I tell you it was so wild that even DOPS showed up at like midnight to break it up.

OldHoya may not know much but this one isn't a rivalry and probably isn't going to be a contest. The worst thing about American is that it competes in the Patriot League and that means one thing: Sanctimonious John Feinstein.

Everyone loves the noble battle that the Ivy League and the Patriot League have fought for years, defending the honor of the little guy and toiling without scholarships (though the Patriot does give out scholarships these days). But is it necessary to listen to John Junior preach about it at all times. AND then pay tribute to the Terps? The sportswriters in DC aren't always kind to the Hoyas but there has been no one worse that Feinstein.

Let's focus on the good news: OldHoya endorses the Verizon Center hot dog and strongly encourages eveyone in the arena to eat at least one.

The lack of a published line on the Gtown-AU game in no way means that there is no chance we blow this game on Saturday. Were I an odds maker in Las Vegas, I’d say Georgetown -22.5, and I would also likely have a girlfriend who had also slept with Tiger Woods on more than two, but less than twenty occasions. That aside, we’re not going deprive loyal Casual Hoya wonks of our casual college football thoughts heading into the weekend.

Would your life be better, everything else being equal, if Tim Tebow were in a brutal car accident and sodomized by a bystander before the police arrived? The easiest person in the world to lie to is yourself, so you have to put me down for a resounding "yes" (cue, Marv Albert voice in head), on that one.

Whatever your feelings may be on previous question, a savage wreck is heading in Tebow and Urban Meyer’s direction on Saturday afternoon, in the form of the Crimson Tide running game, coming off a squeaker at Auburn last week. The Pick? TAKE THE CRIMSON TIDE AND THE OVER. Bama 24 - Florida 21. Bama’s 7-4 ATS this season, and will roll to 8-4 after this one for a spot in the BCS championship. Now, if only I had the same degree of conviction that Tebow and Meyer will definitely not be running the Redskins offense next year.

The line opened at 13 on this one and jumped to 14.5. In spite of their spiffy 11-0 record, Texas is only 5-6 ATS and Nebraska is 7-5 ATS this season, specifically 2-0 ATS as an underdog. My hunch is that the line movement is due to heavy public money lining up behind the Horns, not smart money moving in quickly to exploit a mismatched line.

If, and I mean this is a big IF, Nebraska can strike first and keep it close going into the half, this game will be more competitive than you think. Texas has only had one and half close games all season (OU and part of the A&M game), and will struggle if they don’t get out to an early lead. Nebraska’s not nearly good enough to deserve a top 25 ranking, but they should keep it close going down the stretch. Look for 2 INTs by Colt McCoy. The Pick? TAKE NEBRASKA AND THE POINTS. Stay away from the total on this one as it tough to call a final, but let’s say, Texas 30 - Nebraska 21