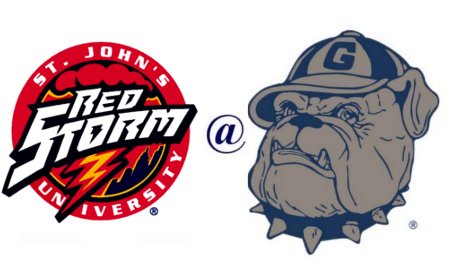 I am sitting on a beach enjoying a break from schoolwork, but dreaming about Georgetown basketball. Calculus problem sets and Philosophy papers can be forgotten but the absence of Julian "Doctor" Vaughn elevating in the paint with a beautiful hook shot leaves a hollow place in my soul, that only ESPN2 can fill. I can guarantee that there will be flowing champagne and raging parties, but I will be seated in front of the TV praying that we win.

A solid Crimson crushing felt good, but nothing could be as sweet as bringing the pain to St. Johns. I think we all can agree that Georgetown has a better team (though I said that last year and…), so if we can keep from shooting three pointers off the sides of the backboard we will move to 10-1. Here’s to bringing in the New Year with a heavy dose of Hoya basketball!

OldHoya has lived through many St. John's battles over the years though very recent history is wholly forgettable and offensive.

Of course, this has been a great rivalry, with the best year being 1984-85. Everyone knows how that year ended, but St. John's was loaded back then with Chris Mullin, Mark Jackson, Walter Berry, and Bill Wennington. That Redmen (yes, OldHoya was around before the silly name change) squad finished the year 31-4, but 3 of their losses came at the
hands of the Hoyas.

OldHoya would be remiss if he didn't mention Louie Carneseca. The longtime coach at St. John's was renowned for his sweaters but revered for his coaching. Little question that all of little Italy was impressed with 1985's 'spaghetti western' when Carneseca battled Jim Valvano's NC State team in the elite eight. OldHoya always roots for the Italians, and having 2 of the finest patrol the sidelines made for a great elite eight game. Though OldHoya is more pleased to note that Gtown won the final four game against the johnnies that year, en route to their first national title.

I had the good fortune of being at MSG last season for both of Georgetown's crushing losses to the Red Storm. In the first loss, Austin Freeman didn't play due to an apparent ankle injury. In the second loss, Freeman shouldn't have played because he was terrible, famously avoiding taking an open last second shot to pass to the dearly departed Nikita who proceeded to hit the top side of the backboard with a shot that wasn't even close, effectively ending our season. Nikita is gone, but that taste of defeat still remains.

Normally I would think a team would want to come out strong against that same opponent and dominate, leaving no doubt who the better team is this year and making a statement to the rest of the conference in its opener. However, I'm not sure this team has that kind of spunk. Not yet, at least.

The pick is St. John's +10, and I'm going UNDER with a final score of Georgetown 68 - Redmen 60. The Johnnies have a lot of size underneath that I suspect will lead to a lot of easy putbacks. The Hoyas have guys who send odd tweets and will want to make it to Village C so as not to be tardy for their New Year's party.

The Hoyas are currently 4-2 ATS (that's 'Against The Spread' for those just tuning in).