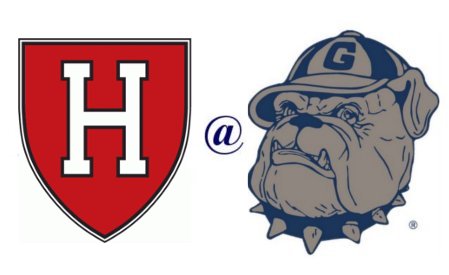 What…Was…That? So much for home court advantage. Running on thirty sleepless hours, I rallied, expecting to crush our foe at McDonough. Unfortunately, history repeated itself in a cruel way. I had planned on shaving my finals beard after the ODU game, but I will not do so until we pass the test that is Harvard.

Mom and Dad, forget lacrosse sticks, visors and Polo shirts. I hate the smug Ivy Leaguers and a good old-fashioned beat-down would more than satisfy every Christmas wish I have. I know that "We’ve heard the sons of Harvard tell how Crimson lines could hold them," but what the heck are Crimson lines? And if they hold us, I will be too embarrassed to leave my house over break. Please…a loss to any Ivy League team would be just too much to bear.

A noon game against Harvard? At the Verizon Center? OldHoya is concerned with this start time but will be there to cheer the Hoyas.There's little good to be said about a Crimson team coached by a Duke alum so we'll focus on a highlight of Coach Thompson's recruiting: Patrick Ewing. Patrick played high school ball in Cambridge and the good people at Boston College figured it was a done deal that he would commit to the Eagles. He attended games and was serenaded and when it came time for his announcement, the press conference was broadcast. OldHoya delights in the fact that the broadcast was cut short the moment Patrick announced his choice.

The rest, as they say, is history.

13.5 point favorite? Seriously? Harvard almost beat UConn in Storrs. Is there anything out there to think they can't cover a 13.5 point spread at an empty Verizon Center against a team reeling from the shocking transfer of Nikita Mesheriakov? Is it the imposing inside play of Monroe and Vaughn that will dominate the paint just as they did against Old Dominion? Is it the sharpshooting accuracy from the perimeter from Clark and Freeman? Is the the leadership that Chris Wright will no doubt possess down the stretch?

I'm going UNDER the 133 because our offense is inept, even against a group of Tri-Lambs.

The Hoyas are currently 3-2 ATS (that's 'Against The Spread' for those just tuning in).