Sleeping With The Enemy: Getting Into Harvard

Share All sharing options for: Sleeping With The Enemy: Getting Into Harvard

What better cure for an awful loss to Old Dominion than a date with an Ivy Leaguer.  What's that?  They almost beat UConn?  What?  They beat Boston College? What!  They have a player who just might be better than any of ours?  Oh, crap. As always, we here at Casual Hoya are bringing you everything you need to know about Georgetown's next opponent.  Big ups to Martin Kessler of The Harvard Crimson for going above and beyond the call of duty in providing answers to our penetrating questions.  Martin Kessler, this bud's for you. 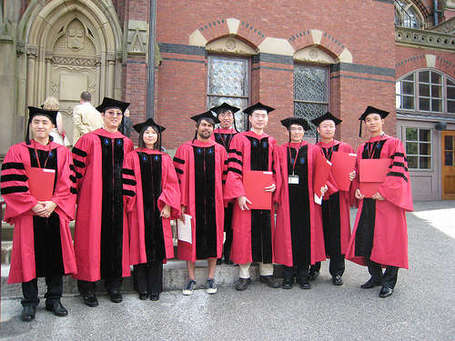 CH:  You are currently at Harvard. Are you, like, smarter than us?
You can be the judge of that after reading the rest of these answers. If any of my claims lead you to question my sanity, feel free to inquire about my acceptance at the admissions office (617-495-1551). I too would like to know why I am here.

CH:  What can Georgetown expect from this Harvard squad? Who are the best shooters? Best rebounders?
One thing Georgetown certainly cannot expect is an easy win. This is a young Harvard team but one that does not crack under the pressure of facing tough competition. The last time Harvard was blown out by a BCS opponent was the first game of the 2007-2008 when it lost to Stanford 111-56. Since that pummeling, Harvard is 3-3 against BCS conference opponents with a win over Michigan and two over Boston College. So far this season, Harvard has lost to UConn by six points and beaten Boston College by seven. What's even more impressive about those two performances is that Harvard played with two high caliber opponents without strong play from its second best scorer and two best shooters. Sophomore point guard Oliver McNally, who averaged 10.71 points per game heading into the games against UConn and Boston College, was held scoreless in both contests.

Freshmen sharpshooters Dee Giger and Christian Webster combined for 12 of 29 (.4138) shooting from behind the arc in Harvard's first five games of the season, but shot an abysmal 2 of 12 (.1667) against Harvard's toughest competition. If McNally can return to his old ways and Giger and Webster can get a couple more shots to fall, this could be a very tough matchup for Georgetown. Harvard will have trouble keeping up with the Hoyas on the glass. Harvard's leading rebounder is Jeremy Lin, a 6'3 guard. After that, Harvard gets most of its rebounding from 6'7 forward Pat Magnarelli and 6'8 forward Keith Wright, both of whom have a major assignment ahead of them trying to contain Greg Monroe.

CH:  Harvard was well aware of Tommy Amaker's issues in his two coaching stops before joining the Crimson. And as if on cue, Tommy Amaker and his assistant, Kenny Blakeney, ran into NCAA hot water for their recruitment of DC star, Max Kenyi (the first NCAA investigation at Harvard). Has the arms race among the BCS schools now trickled down to the Ivy League such that member schools are willing to bend or break the rules?
I don't know enough about the Max Kenyi situation or Harvard's recruiting tactics to offer much insight but I do know for certain that the quality of player the Harvard coaching staff is pursuing is much higher than in past years. Amaker and his staff have been in the running for such top recruits as Dwight Powell (who committed to Stanford) and Rod Odom (who committed to Vanderbilt). Two freshmen on Harvard's current roster spurned offers from Stanford to play in Cambridge. Amaker is certainly a strong recruiter who has used the Harvard name brand and the opportunity to bring home the school's first Ivy League championship as a means of attracting interest.

CH:  Is Jeremy Lin a legitimate NBA prospect or is he just another Jerome Allen?
Yes and No. Yes in the sense that the talent and athleticism are there. Lin has showed that he can play against top collegiate guards like Kemba Walker, Jerome Dyson, Tyrese Rice, and Reggie Jackson. But NBA scouts will continue to question his athleticism and size. I expect Lin to go undrafted but to receive enough interest from NBA teams that he will have the opportunity to play in summer league games and fight for a roster spot.

More with Harvard after 'The Jump':

CH:  I always hear rumors that MIT is a legendary party school, but simply can't bring myself to believe that they are true. You are a Harvard student. It's Saturday night, you've completed your homework for the week and you're ready to rock. Where are you going and what kind of trouble/action is out there in Boston or Harvard Square?
Saturday night and I'm done with my homework for the week? I can't even fathom that situation. A more reasonable scenario would be, "It's Saturday night and the library is about to close so you're about to be forced out into the real world. What do you do?" As a freshman guy, I usually just end up crying myself to sleep as all the girls head over to the Final Clubs, Harvard's elitist version of fraternities.

First of all, I don't think the guys at the Cornell Basketball Blog would much appreciate you belittling their own Ryan Wittman. But moving past that, if you were to ask fans at Penn or Princeton, I'm sure they would say a lot of their downfall had to do with poor coaching. After Penn's horrific 0-7 start to this season, they got rid of Glenn Miller, something fans had been demanding for a long time. Princeton seems to be heading in the right direction, going from Ancient Eight cellar dweller two seasons ago to Cornell's runner up a last year. Harvard's recent rise can be attributed to both the hiring of Amaker and its new financial aid initiative, which allows it to compete with schools that offer athletic scholarships. Along that same note, Cornell fans would likely argue that its coach Steven Donahue has been a large factor in Cornell's rise.

CH:  Coach Thomson famously recruited Patrick Ewing from Cambridge Rindge and Latin with promises that it never snows in DC and thankfully, Ewing fell for that line. When the weather's so awful that your best high school player flees at a blatant lie and chicks cover up for 6 months a year, why would anyone go to school up there?

Before answering that question, let me tell you a few things about Cambridge Rindge and Latin, the school I graduated from just this past May. You would think that Georgetown would look favorably at us, seeing as how we produced the player that led you guys to an NCAA championship. But no, that is not the case. As college decisions were getting mailed out, my friends and I joked that the last person from our school to get accepted at Georgetown was Ewing. Sure enough, nobody from my school got into Georgetown for another year. Honestly, I don't know of a single person other than Ewing that has gotten into Georgetown from Cambridge Rindge and Latin, a school that currently has over 20 students at Harvard. One of my good friends from high school had to settle on Harvard after he was put on the waiting list at Georgetown. So if any of you guys have sway over at the admissions office, I would appreciate it if you could bring that up before I send Patrick over there to sort it out, Anyways, back to the original question. I think the simple answer is that Cambridge is the best city on the planet. Why wouldn't you want to live in the People's Republic, where the Green Party candidate regularly defeats the Republican candidate?

CH:  Boston boasts the Union Oyster House, the oldest operating restaurant in the U.S., and its only other food claim is to baked beans. Where's the best place to get an oyster and are you still angry at having to face British cuisine after winning the Revolutionary War?

I don't like oysters and I don't know why there is a question about Boston. Harvard is in Cambridge, which is a much better city than Boston. If you're ever in town you should head over to Felipes where you can get a burrito for like three bucks.

CH:  Yes or no: You are aware that Harvard is referenced in the Georgetown Hoya Fight Song.
No, but it doesn't surprise me. Lots of schools try to associate themselves with Harvard to boost their image.

CH:  Please give us your two cents on the Harvard-based movie "With Honors" starring Brendan Fraser, Moira Kelly, Patrick Dempsey, Joe Pesci as the homeless guy who lived in the library, and containing the monster hit "I'll Remember" by Madonna.
That movie was a little before my time but I think it's safe to say that Legally Blond is the best Harvard-based movie. But in all seriousness, there is really no need to watch any other Harvard movie if you have already seen Good Will Hunting with Ben Affleck and Matt Damon, who I might add are also Cambridge Rindge and Latin graduates.