Gotta be honest, when I first looked at the 2006-07 Hoyas schedule and saw Old Dominion, I thought the team was taking a trip to an amusement park.  After forty minutes of watching the Hoyas play like poppycock and listening to horrific chants of C-A-A from the Monarch faithful, I learned that Old Dominion was a lucky team from the Colonial Athletic Conference.  And that Georgetown was not worthy of their #8 ranking.  John Thompson III had this to say after the loss:

"Our group has along way to go, in spite of what people write about you, what people say about you.  I think our group is an honest group. We have questions that need to be answered. We've got a lot that we need to work out, and we're in the process of working through that."

Are there any similarities to this year, when #11 Georgetown plays Old Dominion at McDonough for the first time since that night in 2006 when the Monarchs handed the Hoyas their first on-campus loss in 24 years?  You betcha!  This game has trap game written all over it.  But is it a rivalry?  Is there anything more to the game that should entice students to skip studying for finals and fill the 2,500 seats at McDonough?

The below champ certainly thinks so.  After the shocking loss, David Jones, an alum from the Old Dominion, had this to say in a letter to The Hoya:

As an Old Dominion University alumnus and basketball fan, I want to congratulate the Hoyas on their fine effort Sunday. Your team is really coming together nicely. I particularly commend the superior coaching of John Thompson III. To come within 13 points of the Monarchs, even in your poor excuse for a high school gym, is quite a feat. Your kids really "nutted up" under the intense pressure that the Monarchs brought to bear.

The first time ODU played at McDonough Gymnasium in 1977, Georgetown lost 80-58. So, as the student body leaves campus to celebrate Thanksgiving, keep your chins up. You were well represented on Sunday.

Obviously, the gap has narrowed, and the Big East has become a real competitive conference. Heck, that was illustrated last year when Connecticut took George Mason into overtime. It's gotten to the point that I believe the Big East's top teams, on any given night, could defeat the bottom half of the Colonial Athletic Association. This type of parity is good for the game.

Again, thanks for giving ODU your best. Even though the Hoyas would be no more than a "trial horse" in the CAA, they played closely with ODU for 30 minutes. That was just the type of challenge a top conference team needs early in the season to get ready for conference play. If you were in the CAA, you would know what I am talking about.

See you next year in Norfolk.

Are these fighting words, or a desperate plea for attention? You decide, I personally don't really think of Old Dominion as a rival, I mean any school that boasts 400 acres of ultimate entertainment for the entire family can't be that bad. 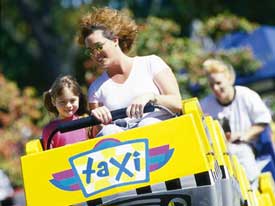 As for the 2006-07 Hoyas, Thompson was spot on with that after-game quote.  The Hoyas did need a lot more work.  They ended up losing two of their next four games and dropped out of the Top 25, with a 4-3 record.  And then they won 26 of their next 29 games, resulting in a Big East Regular Season Title, Big East Tournament Title and Final Four appearance.  But what Davey Jones said above is right, the Hoyas probably would not have been able to beat the bottom half of the CAA, thankfully we met UNC and not the vaunted Georgia State Panthers in the Elite Eight.