Share All sharing options for: The Casual Awards: Hoyas Dominate the Huskies

Ever since we have started this post-game ritual, Georgetown has not lost a game.  Coincidence?  I think not so. Ladies and Gents: The Casual Awards: Cali style: 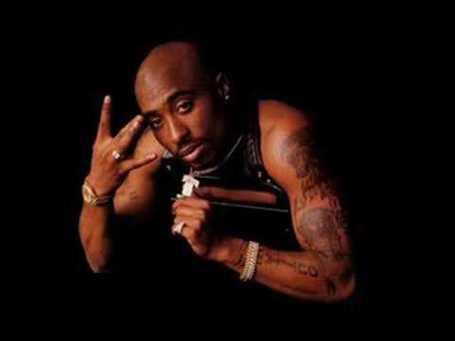 Jersey Shore Awesome Award:Goes out to something that is kickass awesome, named after the new kickass awesome MTV reality show.  Inaugural recipient of the award: the new black uniforms.  Displaying an incredible blend of intimidation, hostility and eloquent poise, the new black uniforms are highly approved by the Casual Hoya staff.  As a side note, now that the majority of us have witnessed the brilliance of Jersey Shore, we are all in agreement that if this doesn't win all Emmy's, there is no hope for the future of America.

The Nikita Mesheriakov Memorial Stay Hot Award:
Easy to look at the box score and single out Chris Wright for his four turnovers or Hollis Thompson for his 1-5 from the field, but both played stellar defense on the quick Huskies.  But we're not going to give the Stay Hot Award to Hollis since his friends and family came out in full force in Anaheim.  So the receipt of this week's Stay Hot Award is Mr. Wright, who really needs to get his head on straight and run the damn offense, especially when the Hoyas are nursing a lead.

The John 3:16 Award:
The Award for worst sign ever goes to the fan holding up a sign proclaiming: Sir Jason #21.  Really?  That is it?  No explanation why, when or how Jason Clark was knighted and invited to join the ranks of nobility?  Reminds me of the nice family some years back that always held up a sign at the MCI Center that read Happy New Season Bowman #1.  Every home game they would appear on the big screen holding and dancing with that sign, even when the Hoyas were playing losing in February.  That sign became as expected as the Esherick double-fist play to end games.

Sean Archer and Caster Troy Face/Off Award:
Some might believe that the below picture is a the result of a careless programming mistake by the FSN broadcast team.  They would be wrong.  During halftime of the game, Washington's Quincy Pondexter and Georgetown's Greg Monroe actually underwent the same procedure as Sean Archer and Caster Troy in Oscar-snubbed movie Face/Off. Luckily, the good folks over at FSN were able to see right through the ploy and correctly identified the souls of the two players. 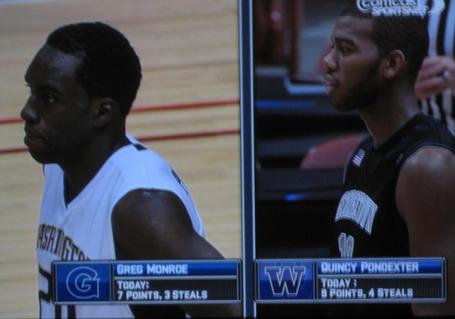 Michael Corleone Family Award:
This new award goes out to Rayshawn Reed, an Esherick recruit that left the Georgetown family after JTIII's first year at the helm, only to return five years later, behind the Georgetown bench as they played Washington.  Much like Michael Corleone in The Godfather, Ray was unable to live his life as a civilian and returned to the family business after a brief hiatus in Sicily (or Cal State Fullerton). 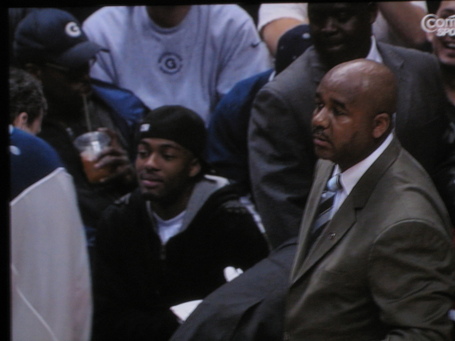 Wizard of Westwood Award:
Aptly named for the finest coaching done by either team while playing before John Wooden: Simple win for JT3 for NOT playing Nikita. Wooden's in his 90s and there's no way his heart could take seeing Nikita defile the game or the tournament that bears his name.

ACC Foot-in-Mouth Award:
This award recognizes stupid early predictions and analyses that turn out to be very wrong.  The award is named after the ugly step-sister conference of the Big East, the ACC, who time after time try to promote the virtues of their top heavy conference only to fail and fail again.  Today's recipient of this award is the Casual Hoya staff, who after blasting the Hoyas for a poor showing against what we deemed to be a meager Temple team, have quietly shut our mouths after the Owls knocked off #3 Villanova.  Then again, Nova may be horrible.

The Bruce Springsteen 'Darkness on the Edge of Town' Award:
Named in honor of perhaps The Boss' most dreary album, this award goes to Casualhoya.com for pointing out that we can't overlook the fact that our starting five each played at least 24 minutes (and impressively, each finished in double figures) but the only bench support came from Thompson.  This could become a problem at some point.

The Brandon Marshall What The F*ck Was That Performance Award:
Julian Vaughn. Named in honor of Marshall's NFL-record 21 reception performance that likely won or lost you a playoff game this week, this one goes to player of the game Julian Vaughn for his breakout performance in Anaheim.  Special shout out to Vaughn for (1) realizing that he's not a guard and thus not chucking any 3s and (2) knocking down all free throws.

DaJuan Summers Memorial Dunk of the Game:
Austin Freeman. We missed seeing a Hoya dunk clang off the rim this year without DS trying to impress scouts with his hops.

Anti-DaJuan Summers Memorial Play of the Game:
Austin Freeman. After he missed the dunk he actually ran back on defense, stole the ball, and finished with a strong layup, completely redeeming himself.

John Shaft Badass of the Game:
Julian Vaughn. Forget the 18 points and numerous dunks, he's getting the award just for that pick on Isiah "My Parents Hate Me" Thomas. Loved the smirk on JV's face after he got called for the offensive foul.

Space Jam "The Aliens Stole Our Ability to Play Basketball" Award:
Henry Sims. Remember that scene in Space Jam when the aliens come down and steal the professionals' ability to play basketball. Well that's what it feels like every time we watch Henry Sims play.  And yes, we freely admit to seeing and enjoying Space Jam.  I believe I can fly, I believe I can touch the sky.  I think about it every night and day.  Spread my wings and fly away.  R Kelly is the best.

Jeff Green's Mom Award for Outstanding Parenting:
Hollis Thompson's family for passing out ‘Welcome Home' t-shirts, which were repeatedly captured on TV.  We did not receive a 'Welcome Home Greg" t-shirt when the Hoyas came down to New Orleans.

Twilight Zone Tower of Terror Award for Best Amusement Park Rides:
This award is named for, easily, the greatest amusement park ride on either coast: The Twilight Zone Tower of Terror at Walt Disney's MGM Studios in Orlando and Walt Disney's California Adventure in Anaheim. No other ride comes close, so essentially the runner up is Splash Mountain, a casual flume ride with no lines and no waiting due to lousy weather. 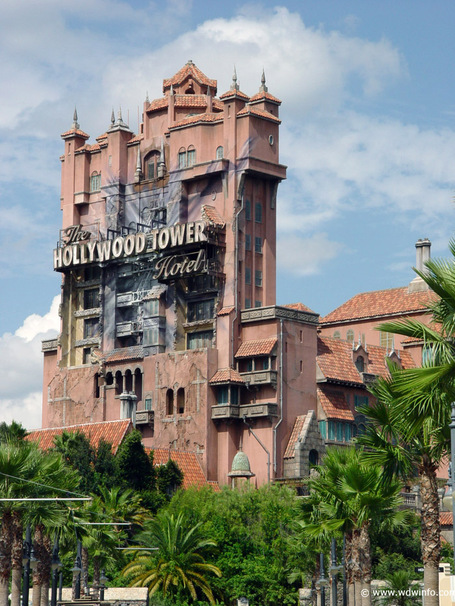 via cheapoair.files.wordpress.com
The Georgetown Hoyas are an undefeated nationally ranked powerhouse.
Old Dominion is NeXt.