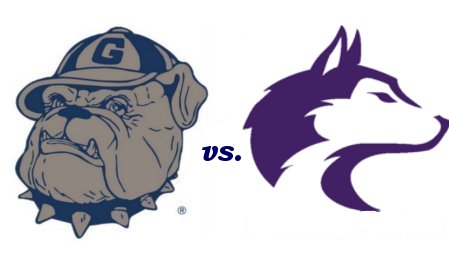 I'm really relieved the Hoyas beat Butler, but now it seems on campus that expectations are pretty high for this year's squad. My friends and I didn't expect us to beat Washington when the schedule first came out, but now the prospect of us being a potential top 10 team with a win has everyone downright giddy. Of course, since we're in Final Exams right now it doesn't take much to make us downright giddy, but nonetheless we are giddy, and we hope we are even more giddy on Saturday afternoon. Giddyup. I need a Red Bull.

Washington reminds OldHoya of only one thing: April 2, 1984 - the day the Hoyas won the National Championship. The game was played at the Kingdome in Seattle, Washington - way before the city got inundated by overpriced coffee shops and people who forget to shave below their lower lip.

Interestingly, in 1984, had Washington not lost to Dayton in the Sweet Sixteen - they would have played Georgetown in the Elite Eight match.

Been awhile since Georgetown has last played in California - not since 2001 I believe, when a Esherick-led Georgetown lost to a Lavin-coached UCLA by 7. I think this one might turn out differently.

Georgetown has been installed as a 2 point favorite. The o/u is 143.

Coming off a fairly impressive win over a ranked Butler team at MSG, Georgetown has clearly impressed Vegas to the extent that Vegas has made it a 2 point favorite on a neutral court in Washington's region. I suspect the 2 point margin is strictly based on the Hoyas' (and Greg Monroes) performance against Butler. As the Hoyas extended to a 17 point lead against Butler, I figured the point spread in the Huskies game was probably shifting from a Huskies -2 to the other way.

The Hoyas can exploit the Huskies inside, but I think that defeating another ranked team in the same week after traveling coast to coast may be too much to ask. This could be one of those games where nothing goes right early and Washington makes a big run led by that elven point guard who ruined the Knicks. I hope the team had a great time at DisneyLand but avoided that Star Tours ride which nearly made me sick.

If the Hoyas win this game they might be better than we think they are.

The pick is Washington Huskies +2. Figure something like Huskies 74 - Hoyas 68. I am going UNDER, though I will note that this game could be an up-tempo spoogefest. Regardless, that does not play into Georgetown's favor on the outcome.

The Hoyas are currently 2-1 ATS (that's 'Against The Spread' for those just tuning in).