Sleeping With The Enemy: Meet The Washington Huskies

Share All sharing options for: Sleeping With The Enemy: Meet The Washington Huskies

Well, it's nearly mid-December and the Georgetown Hoyas are still an undefeated nationally ranked powerhouse.  Woo-hoo!  The Hoyas have won with ease in the friendly confines of Verizon (assuming the Temple game never happened), and have vanquished foes outside of the nation's capital, traveling down to New Orleans and thrashing the Green Wave, crushing the souls of the Tigers of Savannah State, and just this week returning to the World's Most Famous Arena to serve nuts on the Bulldogs of Butler.  Next up on the schedule will likely be the Hoyas' toughest test yet, a date with the 17th ranked Washington Huskies in the Wooden Classic in Anaheim.  We here at Casual Hoya realize that you are all likely in bed or passed out by the time the Huskies and their Pac-10 foes usually take the court, so in this version of Sleeping With The Enemy we're telling you what you need to know about our opponent to the West.  Special thanks to my main man Anthony Cassino over at SBNation's own UWDawgpound for answering our penetrating questions about U-Dub.  Anthony Cassino, this bud's for you. 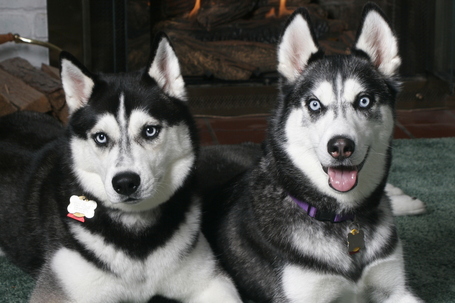 CH:  What are Washington's strengths and weaknesses? Who are the best shooters? Rebounders?

Under Lorenzo Romar the Huskies have made their living on the offensive glass. For each of the last five years the team has been in the top 8 nationally, and this year we're sitting at second. Teams that let UW pound the offensive boards usually get beaten. The team's core is the two headed monster of Isaiah Thomas and Quincy Pondexter, who are both averaging over 20 points per game.

The two big weaknesses that this team has are perimeter shooting and size. Isaiah Thomas' shooting is much improved from last season, but can still be pretty inconsistent. Elston Turner is a talented sophomore guard and is probably the team's best shooter, but beyond those two guys there's not a single player I'd want shooting from deep unless there isn't a defender within 10 feet. Inside the Huskies have Matthew Bryan-Amaning and not a whole lot else. He's got talent, but gets into foul trouble frequently and usually disappears when playing a quality team. Matching up against Monroe is going to be a real test of his progress. Behind him the only true post player on the roster is Tyreese Breshers, who sat out last year with an injury and is still working himself back into shape, so he can't really be counted on for more than 15 minutes a game.

A weakness that Georgetown may exploit is that the Huskies tend to overplay on the perimeter a lot, which leaves them vulnerable to backdoor cuts.  The best rebounder on the team is Quincy Pondexter who is averaging 9.6 a game. He's not the tallest guy, but he's strong, quick and athletic and has the ability to beat guys to the ball, and scores more than his share of second chance points.

CH:  In the 1992 movie Singles, Steve (played casually by Campbell Scott) has a grand vision of a "supertrain" for Seattle - it will cut down on traffic and be good for the environment. He explains the idea to his friend, who nods in approval, then hesitantly replies, "But I love my car." Steve eventually gets a meeting with the mayor (played casually by Tom Skerritt), where he explains the great benefits of the supertrain. The mayor is silent for a moment, then says, "People love their cars" and the supertrain dream is dead.  Question: How do you feel about a supertrain?

The supertrain is actually underway. Admittedly, I've never seen Singles, so I'm not sure what the vision was, but this past summer light rail was implemented which runs from downtown Seattle to Tukwila, near the airport. It's still in its infant stages, but the plan is to add to it until it services a large portion of the city. I guess Singles was just ahead of its time.

CH:  Have you ever looked at your roster and shuddered because you have a player named Isaiah Thomas? How good is your Isaiah and what can teams do defensively to cause him problems?

I can't say I've ever shuddered, but it does get annoying how every nationally televised game they have to tell the story of how he got his name. I feel like Ive heard it about 50 times, and he's only a sophomore. Just so you know what to expect: his dad lost a bet, and his mom was ok with it because Isaiah is a biblical name.

How good is our Isaiah? Very good. Despite being listed at just 5-8, the kid knows how to attack the rim. He's one of the quickest players in college hoops, and I've really yet to see a defender who can stay in front of him. He likes to get into the lane and initiate contact to get to the free throw line, where he's improved his accuracy and is over 80% on the year.
If you had asked me last year how to stop Thomas I'd say to back off and make him beat you with his jumper, but he put in the work over the offseason and is shooting 39.5% from range this season. If it were me, I'd put a longer defender on him and make him work to shoot tough shots in the lane. He can also be a bit bullish when he's in attack mode and doesn't pass as often as he should, so a team effort of rotating a shotblocker over to help when he makes his move would probably work as well.

CH:  Last year the Pac-10 sent six teams to the NCAA Tournament but this year only one team is ranked in the Top 25. Why the stark difference? Will the Pac-10 rebound or will this be the down year that was supposed to have happened last year?

Over the last three years the Pac-10 has had more lottery and first round picks than any other conference. And being the smallest of the Big-6 conferences, that's just not sustainable and the bottom had to fall out at some point. That point is this year. It also doesn't help that there's been a lot of coaching turnover; half of the conference's coaches are in their first or second year. This is absolutely the down year that many predicted, and it may even be worse than most thought it'd be with UCLA looking absolutely pathetic early on.

More fun with 'Sleeping' after The Jump:

CH:  Seattle has become a prep basketball hotbed in recent years and with Cameron Dollar as a lead assistant, UW was able to string together several impressive recruits (while missing out on some big names, such as Jamal Crawford). As Dollar has moved on to be the head coach at Seattle U, how will recruiting change at UW?

It's not just Seattle, its all of Western Washington. There's only one Seattle player (Venoy Overton) on the team, but there are three Tacoma kids (Isaiah Thomas, Abdul Gaddy and Clarence Trent). ESPN's #1 high school prospect in last year's class (Avery Bradley) is from Tacoma as well. There are some kids from Kent who are big time recuits, incluing Josh Smith, one of the top players in the 2010 class.

I don't see recruiting changing all that much with the loss of Cameron Dollar. At the end of the day Washington is a school with a lot going for it: plays an uptempo style that many recruits want, located in a great city, big conference, players from the school have had success in the NBA, and the players really love Coach Romar. The man brought in to replace Dollar, Raphael Chillious, has already used his recruiting ability to help get a commitment from Enes Kanter, a member of the Turkish U-18 national team currently attending prep school in California.

CH:  UW's now cancelled series with Gonzaga UW's has all the pigheadedness of Maryland refusing to play Georgetown. Back when Gonzaga was just a lowly WCC team, the series was a no-win for UW but now that they are a legitimate Top 25 fixture, why wouldn't the teams man up and agree to a home-and-home series?

Back in October, UW proposed a 3 game series with Gonzaga with all games being played at the nuetral site of Key Arena. Gonzaga shot the deal down and didn't make a counter offer. The Huskies thought it would be a good deal because both schools would make a ton of money, but Gonzaga didn't want to travel to the west side of the state three straight years.

The reason these teams won't be meeting any time soon is that Lorenzo Romar and Mark Few simply don't like each other. Back in the early portion of the decade Few tattled on Cameron Dollar for violations in recruiting, which cost UW a shot at signing both Marvin Williams and Josh Heytvelt. The blood has been bad ever since then and I wouldn't be surprised if the series remains dead as long as the two coaches hold their positions.

CH:  The city of Seattle was able to enjoy former Hoya, Jeff Green, for one year before the Sonics' outlandishly greedy owners moved the team to that basketball hotbed, Oklahoma City. 2 questions: What's the best memory of Green as a Sonic and will Seattle ever get another NBA team?

I remember being really excited about that draft, getting Green and Kevin Durant. It was a fun draft day, but once the season rolled around I couldn't bring myself to watch them play. I didn't want to get attached to those young players when it was so obvious that the team was going to be taken away.

I don't see Seattle getting another NBA team. It's not financially viable at Key Arena, so someone would have to step up and build a brand new arena for an NBA team. Taxpayers won't want to help out, as they've already chipped in on Safeco Field and Quest Field, and are likely going to be hit up on a Husky Stadium renovation within a couple years. If the NBA does come back to the great state of Washington, it won't be anytime soon, and I'd be shocked to see it in my lifetime. It's a shame, because Seattle was an excellent NBA city.

CH:  UW's heart and soul for the past 4 years, Jon Brockman, has now moved on and the team has moved to a more perimeter oriented attack. What can we expect from UW?

Expect the Huskies to apply lots of ball pressure to try and force some turnovers and push the ball to dictate tempo. The team is best when games are played at a faster pace, and I don't think they can play a halfcourt game and beat Georgetown. Venoy Overton is one of the best on ball defenders in the nation, and by the end of the game the Hoyas and Hoya fans will hate him. When he's on he alone can dictate the speed of the game through turnovers and forcing opposing point guards to get sloppy, so his play is going to be critical to the team's success.

Offensively, it's no secret that that the ball goes through Isaiah Thomas and Quincy Pondexter. Pondexter is the team's lone senior, and is having far and away his best season. If the Huskies go cold or need a big shot, he's the guy they get the ball to.

CH:  Why the hell does Starbucks call its sizes Venti, Grande, Tall rather than Small, Medium, Large?

I have no idea. I think it's an elitist thing though. I'm the minority in that I'm a Washingtonian who doesn't drink coffee. I can't even take the smell of it. And if I did drink coffee, I'd boycott Starbucks after Howard Schultz sold the Sonics to the Oklahoma City Group. 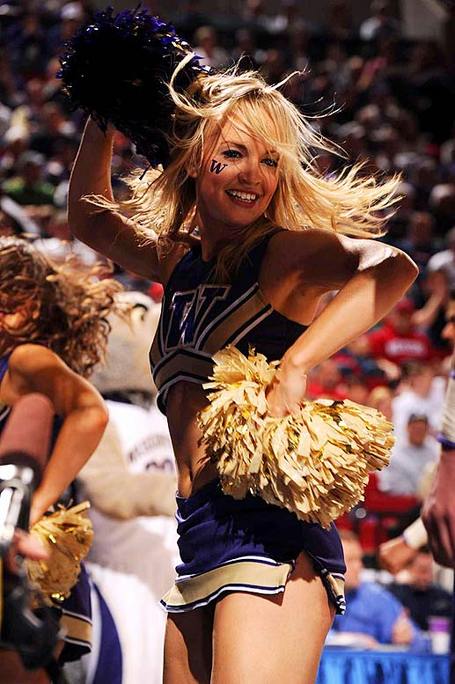