Share All sharing options for: MASN Announces Schedule for Georgetown

Below is the press release from MASN sports regarding locally televised games.

Georgetown Hoops Tip Off on MASN November 28 vs. Layfayette

(Washington D.C.) - MASN, the local leader in live sports entertainment and the official network of the Georgetown Hoyas, will televise nine Georgetown men's basketball games this season. The first televised game will feature the Hoyas as they host Lafayette at the Verizon Center live at 12:00 p.m. on November 28th.

Throughout the season, MASN will televise Georgetown match-ups with local schools like Mount St. Mary's, Old Dominion and Rutgers - as well as nationally-ranked teams like Big East powerhouse Villanova.

"MASN has been a tremendous partner to us over the past few years, expanding our presence throughout the region and helping us reach even more fans, alumni and potential recruits," said Thompson. "We are looking forward to playing on MASN again this season."

MASN is in its fourth year of a partnership with Georgetown University, which allows fans, parents, alumni and recruits to enjoy the Hoyas on 23 different cable and satellite systems throughout MASN's seven-state territory.

"Georgetown is one of the most storied basketball programs in the nation and a natural partner for the network," said MASN spokesman Todd Webster. "MASN is proud of our commitment to local, live sports action and our extensive NCAA basketball package."

The official cable network of George Mason University, the University of North Carolina at Wilmington and the Big South Conference, MASN features hundreds of NCAA basketball games in at least 13 different conferences each season. With over 80 Big East games, MASN is also home to the Big East Game of the Week. Additionally, MASN televises the annual BB&T Classic each December.

The Georgetown Schedule on MASN (link to press release): 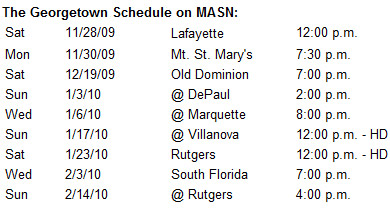 This completes coverage of all Big East games except the New Year's Eve party against St. John's.  Other games yet to be determined (i.e. tune in on the radio) are: Tulane, Savannah State, American and Harvard.  The home game against Old Dominion will be broadcast from inside McDonough.