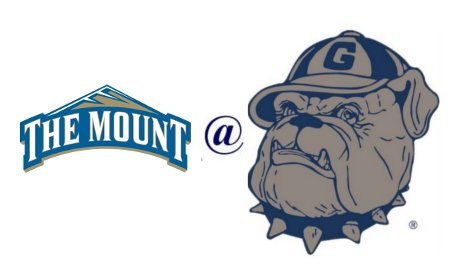 Like most of my fellow classmates I'd rather be watching Monday Night Football, but I did go on the internet during philosophy class this morning and found the following stats:

The All-Time Series with Georgetown...The Mount and Georgetown will be meeting for the 26th time on Monday night at the Verizon Center. It is a matchup of the two oldest Catholic Universities in the nation with the Hoyas holding a 20-5 lead in the series.

* This is the second-straight season the two teams have played. Prior to last year's 69-58 Georgetown win on Dec. 20, the previous meeting between the schools came in 1962.

The Mount vs. Ranked Opponents...The Mount has a 1-14 record vs. ranked opponents since joining NCAA Division I in 1988-89.

* In the season-opener this year, the Mount lost to No. 17 Oklahoma, 95-71. Mount St. Mary's trailed 55-50 with just under 15 minutes left in the game, but the Sooners scored the next seven points (all at the foul line) and went on to the victory.

* The Mount's lone win against a ranked team came at No. 21 Georgia Tech on Dec. 18, 1995. Jeff Balistrere hit a game-winning lay-up at the buzzer to send the Mount to the victory at the Omni in Atlanta.

Defense, Defense...After allowing 95 points in the season-opening loss at Oklahoma, the Mount defense has returned to form over the past four games.

* The Mount has held the opposition to 59.0 points and 36.0 percent shooting over the past three games.

* The opposition is shooting just 25.4 percent (17-of-67) in that stretch from three-point range.

Stuffing the Stat Sheet...Senior forward Kelly Beidler had an outstanding game at Navy on Saturday. * Beidler had nine points, 14 rebounds, five steals and four blocks in the 65-56 overtime win.

Boardwork...The Mount held a 45-40 advantage on the boards in the 65-56 overtime win at Navy on Saturday.

* The Mount is 2-0 this season when holding an edge on the boards.

* In the team's two losses, the Mount has been outrebounded by 18.5 boards per game. Both Oklahoma and Niagara grabbed 51 rebounds against the Mount.

* Under head coach Milan Brown, the Mount is 52-26 when holding the rebounding edge in a game, but is just 25-76 when the opponent outrebounds the Mount.

OldHoya's vacation through the Italian countryside sadly comes to an end this evening, and he expects to make his triumphant return to Court Side for the game against American on Saturday. In the meantime, we suggest pouring yourself a nice Chianti in his honor while watching Monday Night Football the Hoyas this evening.

Shockingly Vegas doesn't have a line on tonight's Hoyas game, so let's focus on the game that really matters.

The Saints are 5-0 Straight Up at home this season and 7-3 ATS in their last 10. As a 1 point favorite at home this is basically a pick 'em, and I'll take the undefeateds in the crazed Superdome against pretty boy Brady and his legion of Massholes. Who Dat.

Will Nikita have more fouls than points, again?