Sleeping With The Enemy: Lafayette Leopards Roar Into Verizon

Share All sharing options for: Sleeping With The Enemy: Lafayette Leopards Roar Into Verizon

I'm going on the assumption that you don't know much about the Lafayette Leopards, so here is our usual feature that brings you what you need to know about Georgetown's next opponent.  Special thanks to Michael LoRe of The Express-Times for bringing the noise with his answers to our penetrating questions.  He is without a doubt without peer when it comes to covering Lafayette Leopards athletics.  Michael, this Bud's for you. 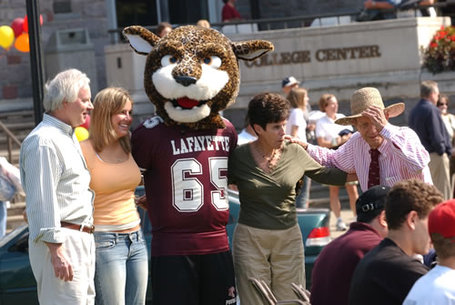 CH: What can Georgetown expect on Saturday out of this year's Lafayette squad?

Simple, the Hoyas can expect about 52 points put up against them.

CH: Lafayette head coach, Fran O'Hanlon, is an alumnus of Villanova.  Does Lafayette not require full-time employees to graduate from fully-accredited universities?

Well, Fran's going on his 15th season with the Leopards, so I'm sure qualifications were different way back then.

That's a good point, but c'mon.. wouldn't you rather be a Leopard than something like a Banana Slug or Blue Hen? Jeez, I can't believe I just dissed my alma mater (Delaware, not UC Santa Cruz).

CH: What are Lafayette's strengths and weaknesses?  Who are the top performers this season?

Lafeyette's strength is on the inside in junior forward Jared Mintz. Not only is he Canadian, but he leads the Patriot League (as of Tuesday) in points per game with 18.8. He's really improved his game over the past few years and coach Fran O'Hanlon said Mintz is more fit physically, which has helped to his strong start this year.

The Leopards, who are the highest-scoring team in the league, aren't afraid to shoot the 3-ball either. If defenders are double-teaming Mintz inside, guards Michael Gruner, Jeff Kari and company will make it rain from downtown. Lafayette was 10-for-21 on 3s in Tuesday's 86-82 win over Hartford, including 9 of 16 in the first half.

In terms of weaknesses, the team is very young. Though they graduated just one senior last year, this season, the roster has two seniors in Kari and Gruner. Four juniors, seven sophomores and and two freshmen round out the roster.

CH: Both Lafayette and Georgetown play football in the Patriot League.  Over the past five seasons, Lafayette has beaten Georgetown five times, by a combined score of 137-37.  What are your thoughts of the Georgetown Football program?

I wouldn't have known Georgetown had a football team if I didn't cover Lehigh and Lafayette. The Hoyas should either abolish the program and stick with basketball or drop to like Division III and maybe get more than two wins a year. And if I'm not mistaken, they don't have a football media guide and/or weekly game notes. I guess they're saving paper for the bball season.

CH: Army and Navy; Ohio State and Michigan.  Both are historic football rivalries that garner significant media attention but the longest running rivalry in college football is actually Lafayette and Lehigh.  Do you feel slighted by the lack of attention?

Well, ESPN College GameDay picks the game (at least this year) and Lee Corso actually called the upset. It is unfortunate the rivalry doesn't garner as much media attention as some of the other ones, but it is definitely the talk of the town in the Lehigh Valley, I can tell you that much.

CH: The highly esteemed Casual Hoya blogger 'itsallthatmatters' has passed nothing but liquid over 30 times in the past 12 hours.  What is the most amount of times you have excreted non-solid matter in a 24-hour period?

Firstly, it sounds like 'itsallthatmatters' is about 68 years old with an enlarged prostate -- I'd go see a doctor or stop drinking so damn much. I hope the bathroom is close to your desk. I can't really answer the question because I don't count.

CH: This has been so much fun, how about some BONUS QUESTIONS!:
Besides Larry Holmes, what else are people proud of in Easton, Pennsylvania?

Nothing. No, I kid. I'm not from the area (I have a lovely 40 minute commute to work), but it seems people in Easton are really into the high school and Red Rovers football and wrestling. They're also proud of hating Phillipsburg, N.J. -- their rivals.

CH: If Washington, DC is a 10 on the college city scale, would Easton rank in the negative?

I don't really have time to hang out in Easton, normally just heading out to work. So I can't tell you.

Beats me. The Lafayette players must have been partying too hard Friday night or something -- too many dumb penalties and turnovers. I think rushing the ball six times up the gut with Tyrell Coon instead of kicking a field goal did the Leopards in. 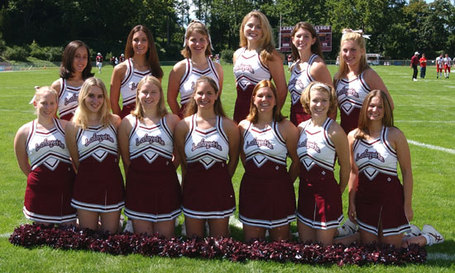