Before everyone embarks on their journeys home for Thanksgiving, I'd like to countdown the sweet 16 things I am most thankful for, Georgetown basketball edition.

This is a hard one to be thankful for, considering all the good things he did in a Hoyas uniform his first three years, but he needed to go.  Hearing rumors of missed practices and Monday night sightings at the Tombs was disappointing enough, but what really bothered me was the personality clash with Chris Wright.  I don't know what exactly happened during halftime of the Duke game, all I know is our season never recovered.  Chris Wright may be a punk, I see that, but Jessie was our lone contributing senior and it was his job to meld personalities, not be a divisive force.

You may be asking, "Why is a video of 3 Oklahoma City Thunder players dancing and rapping on your Georgetown Thanksgiving list?"  Well, watch the video and appreciate the comedy and Jeff Green's rapping and dancing "abilities".  I can imagine Jeff, Tyler Crawford and Jonathan Wallace doing the exact same thing in a Village A. Other video here.

It's odd to be thankful for your leading scorer leaving, but anyone who watched Georgetown in 2008-2009 would agree.  I just couldn't take watching the college version of Vince Carter go numerous games mailing in performances and disappearing on the glass and defensive end.  Also, aside from the Louisville game his sophomore year, he was the anti-closer. 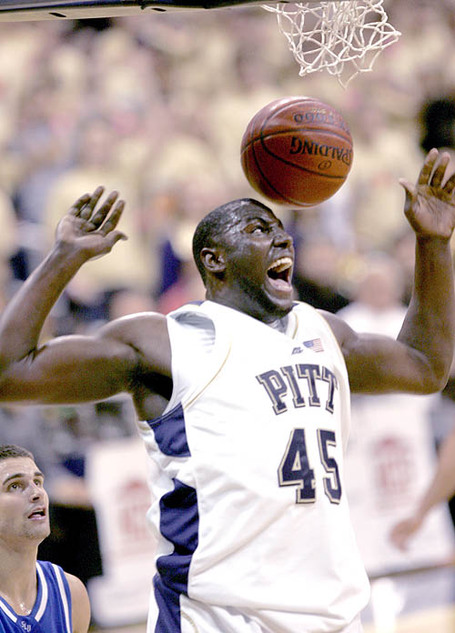 I am so glad that I won't have to see his Charles Barkley-wannabe-body dominating our scrawny big men for another year.  In three career games against the Hoyas, he was 3-0, averaged 15 points and 12 boards, and basically had Greg Monroe sucking on his thumb begging for his mommy in DC last year.  Good riddance fat man.

11.  Not playing St. John's in Madison Square Garden this year

It's too soon for me to relive the two massacres I witnessed last year.  Just too soon.  Let's move on, quickly.

10.  Another year of Rich Chvotkin

Thus far, our two recruits from the class of 2010.  From everything I read about them, we have the second coming of Chris Paul and Larry Bird, so I'm looking forward to seeing them in the Princeton offense.  Just like I couldn't wait to see the second coming of Scottie Pippen (Hollis Thompson), Chris Webber (Greg Monroe) and Kevin Garnett (Vernon Macklin).  Hope is a good thing.

Check them out when you get the chance.  They are the gift that keeps on giving.  Thus far, the guy that felt like a robot in the Georgetown offense has led his team to losses at the hands of perennial powerhouses like Boston University, George Mason, and Ole Miss.  It is glaring how much we'd miss that 36% FG shooting, 61% FT shooting, 9 points per game, and 1 to 1 assist-to-turnover ratio.  Keep chugging along champ.

7.  The "Thriller" dance at Midnight Madness

Speaking of my boy Nikita, I'm very thankful that he's played a total of 18 minutes this year.  It is a welcome change from when he like, you know, started half the season last year.

I feel like Jason's improvement has been lost in the shuffle for Hoyas fans this season while we pour over Greg Monroe's perceived lack of improvement, the merits of the Princeton offense, and the existence of God.  Mark my words, if Jason can continue to stroke it from three and provide strong perimeter defense, our season will be much better than people expect right now.

Four years and nine days after the win that put Georgetown back on the map, we get to play them back at the phone booth.  It'd be nice for the Hoyas to avenge the losses at Cameron Indoor in both 2006-2007 and 2008-2009.  If nothing else, I'm begging current Georgetown students to have signs making fun of Kyle Singler being a ginger, the Brothers Plumlee, and Mike Krzyzewski's toupee.

Can you imagine what Hoya Talk would have been like had he not?  I think some people would have seriously suggested shutting the program down for the season.  Monroe's shot also exercised some personal demons for me.  I was following from work on ESPN Gamecast, seeing the big lead, the subsequent blowing of said big lead, cursing, yelling on Gchat, etc.  It all felt too familiar to last season, even the facial tick reappearing.  Then something magical happened with 4 seconds left.  Gamecast said "Greg Monroe made Two Point Layup" and I felt much better.

2.  Greg Monroe coming back to school

Remove yourself from the current negativity surrounding Greg to step back and appreciate the kid.  He's barely 19-years-old, has been working towards the NBA for as long as he can remember, and he put that dream on hold to come back to our tiny university for one more year.  He turned down being a surefire lottery pick and millions of dollars because he enjoys college, wants to right last year's wrongs, and improve as a basketball player.  Imagine the shape the team would be in now if he had done what pretty much any other kid in his shoes, myself included, would have done.  For the next few weeks, let's not harp on his supposed misgivings and appreciate the choice he made. 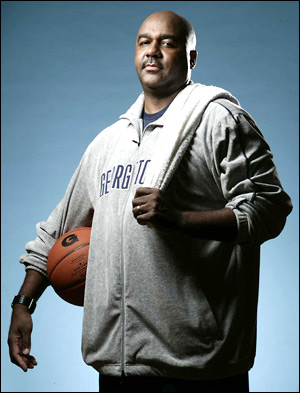 In a time when other college coaches are engaging in extramarital affairs on floors of restaurants, forging SAT scores, and paying six figures to get players into their programs, let's all give thanks to John Thompson III for the job he has done with this program.  Now in his sixth season, he has led Georgtown to a Final Four, two Big East regular season championships, one Big East tournament title, and has done it all with unmatched class.  Reflecting on the JT III era yesterday reminded me how important Georgetown basketball was to my collegiate experience.  JT III has given the school a great sense of pride in athletics.  I guarantee I wouldn't have been writing the same article about the 5 best wins of the Craig Esherick era.