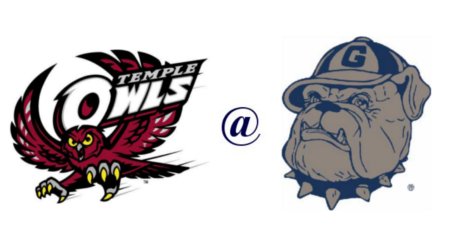 After a comfortable victory against Tulane, student enthusiasm seems to be on the rise. It appears that most of the students who can go to the 4 o'clock game on time are going, while others, including myself, will get there as quickly as possible following class. A few easier games to start off the season are exactly what this team and the student body needs- an opportunity to raise the confidence level up before the real challenges that lay ahead.

OldHoya is dumbfounded by the Owl blogger's unwillingness to take a stand in the cheesesteak battle. There is one acceptable steak for the true Italian: Pat's. If one has extra time - and is lucky enough to be Italian - OldHoya recommends The Saloon or Ralph's in South Philly.

On to hoops - this game renews an Ivy League rivaly from JT3's days at Princeton and Dunphy's days at Penn. Dunphy made a career of studying Pete Carril and JT3's teams and will be ready for another battle, particularly with Temple bringing in a huge front line. From a Big East perspective, OldHoya notes that Temple is a Big 5 team and would compete at the Palestra - before that storied tradition was dismantled by the arrogance of Villanova.

Lastly, OldHoya questions today's student body commitment as he can recall getting to McDonough at 5:45 to stand in line to watch the freshman team play before the varsity. He expects all undergrads to follow in the path he laid over 40 years ago and be at the game today - class is no excuse for missing this game.

The Hoyas opened as an 8.5 point favorite in its home debut. After the line had a chance to get some action, it has since moved to Hoyas -9, the result of the early 'smart money' on Georgetown. The Over/Under is set at 125.5 points.

Coming off a fairly impressive 16 point win (and impressive cover) on the road at Tulane, the Hoyas return to Verizon for a little taste of home cooking. However, given the bizarre start time of 4pm thanks to Georgetown selling its soul to ESPN (which I am fine with), I wonder just how much of a home court advantage there actually will be.

Temple is coming off a 20 point road win against the mighty Blue Hens of Delaware in which Temple big man Lavoy Allen scored 9 points, grabbed 15 rebounds and swatted 2 shots. A 6'9" junior, Allen could cause Greg Monroe a bit of trouble down low, which means that many of the easy looks we had against the Wave may not be there in this one. Temple shot 50% from the field against Delaware, but only 26% from three point range. Guard Ryan Brooks led the Owls in scoring with 23 points (also grabbed 9 rebounds), shooting a whopping 57% from the field - BUT only 17% from behind the arc.

The Hoyas contested nearly every shot Tulane took in the opener, and I suspect if the defense performs at a similar level Temple will struggle to get the easy baskets they likely made against Delaware. If their 3-point shooting is equally anemic, the Hoyas may win this game by double-digits. I don't think they will, but I do think something like a 9 point victory is possible, especially given our solid free throw shooters who will be on the floor down the stretch. As an 8.5 point favorite I like the Hoyas, but at -9 I'll sleep better taking Fran Dunphy and forcing the Hoyas to have to make outside shots to beat me. Given that this will likely be a relatively low scoring affair, I'm taking the points.

Check back throughout the day for updated media coverage and during the game for updates from people in attendance.

Put your hypothetical money where your mouth is