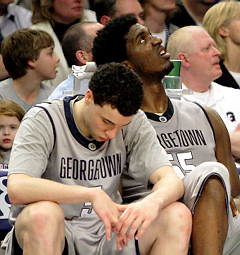 Remember him?  Yeah, that's right.  It's Jeremiah Rivers, the linchpin of the 2007 Final Four squad and self-proclaimed top defender in the nation.  In a recent interview with the Indianapolis Star, Rivers talked about being overlooked by preseason publications and how he is "too focused to let anything negative affect him or his team."

And then he took a swipe at his former team.  When asked about the Indiana offense and its lack of set plays, Rivers stated:

"[The Indiana] offense is so much better because I'm not going out there and worrying about going to a specific spot or running the exact same play three or four times in a row.  At Georgetown I would run the same thing over and over, and it became so repetitive. I really became like a robot there offensively. I had no idea how to play anymore."

The article then went on to report:

At Georgetown, the Hoyas played the Princeton offense predicated on passes to the post and backdoor cuts. It was that style of play that ultimately led to Rivers leaving.

Really Jeremiah!?  I am surprised to learn that you transfered because of the offense.  I always thought it was because Georgetown recruited over you when they realized you had no offensive abilities,  Your future was written on the wall, you would not have started over Sapp, Wright or Freeman, and being a defensive specialist doesn't garner more than twenty sporadic minutes a game.  Hopefully you will learn how to play again soon, sorry Georgetown stuck you in an offense that has produced more NBA draft picks over the past three years than any other Big East school.

"You guys can call me the best defender or the best scorer or whatever, as long as at the end of the day we have a ‘W' to show for it.''

Whiny 'lil bitch starts with a "W", Jeremiah.  At the end of the day, you will always be able to show that W.