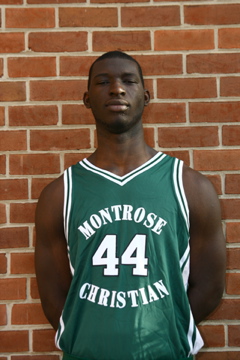 Not much has been written about T. Jordan Omogbehin, a big man out of National Christian Academy with an uncanny resemblance to Jessie Sapp.  But 7'2'', 300 pounds is enough for me.  Hoyaballa caught up with Jordan recently, excerpt below and full interview can be found here.

At a self reported, 7'2 300lbs, National Christian Academy junior, Jordan Omogbehin is a presence on the basketball floor simply due to size. That size coupled with an eagerness to improve and hone his skills, makes the Nigerian born big man an intriguing prospect. Omogbehin has been in the United States now for two years, and has been playing basketball since 2004. Omogbehin first arrived on the scene at Montrose Christian on a talented team. While his playing time was limited, coaches and observers quickly had noticed the potential. This year he has moved on to National Christian Academy in Fort Washington, Maryland. His reason to make the move basketball wise was simple, "To play more. I really did not get the chance for much playing time. And now this year I'll be on the floor a lot more."

Jordan averagde 2 points per game last year as a sophomore at Montrose Christian in limited playing time.  He was also playing behind Mouphtaou Yarou, a standpoint senior heading to Villanova this season.

Hoyaballa also states that Jordan is receiving interest from DePaul, Virginia Tech, Xavier and Tennessee and has not received an offer from Georgetown.